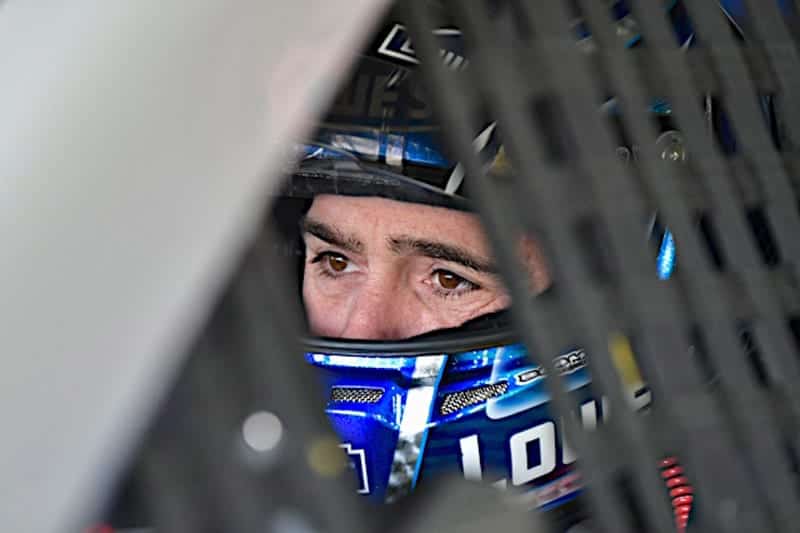 Jimmie Johnson is back atop the Monster Mile in the Monster Energy NASCAR Cup Series. With Sunday’s victory at Dover International Speedway in the AAA 400, he pulled into a tie with Cale Yarborough by earning his 83rd all-time Cup win.

This one wasn’t easy as Johnson charged from the rear after a gear change. The No. 48 team had speed, making its way to the front and was a contender throughout much of the second and third stages.

But as the laps wound down at Dover, it was Kyle Larson, not Johnson, in cruise control. The No. 42 car was out front by well over two seconds before a wreck by David Ragan forced a thrilling NASCAR Overtime finish.

That’s when the seven-time champ rose to the challenge. He capitalized when Larson spun his tires on the restart, sneaking out front during Overtime. A major, multi-car wreck behind them on the backstretch, sparked when Ty Dillon spun out then put the race back under yellow.

“Honestly, it all came down to a restart,” Johnson said. “I knew it would be tricky on old, hot, worn-off tires. I just had a better restart.”

Officials determined Johnson was past the overtime line and therefore awarded the win to the No. 48 team. The outcome was in doubt enough Chad Knaus hollered over the radio for Johnson to stick behind the pace car “just in case.”

It’s the 11th trophy for the seven-time champion at Dover, a series record to go along with over 3,000 laps led. Johnson, who had plenty to overcome on Sunday, now has three victories this season to lead all drivers.

“I’ve always have been better at passing people,” Johnson said. “You put that rabbit out in front and I’ll chase it down.”

Larson was forced to settle for second, his fifth runner-up finish in 13 races as he wondered what might have been.

“I just spun my tires really bad,” he said. “I definitely think we were the best car.”

Martin Truex Jr. was third followed by Ryan Newman and Chase Elliott. It was the first top-five finish for Elliott since Martinsville back in March.

Rookie Daniel Suarez was sixth, a career best followed by Jamie McMurray, Denny Hamlin, Kevin Harvick, and Danica Patrick. Patrick spun on lap 147 but recovered for her first top 10 in what’s been a miserable season.

The Monster Mile lived up to its namesake Sunday with a multi-car wreck at the end the icing on the cake. In all, there were 15 cautions for 72 laps, one short of the track record with the last one doing the most damage.

“I just think air off the 31 [Newman] got me a little loose,” Dillon said of his incident. He also claimed there was sand on the backstretch, put down after the Ragan wreck that made the track slippery.

“It was enough where, I was a little loose, and I hit the sand that NASCAR didn’t pick up off Turn 2,” he said. “It just sent me and it was chaos after that.”

Among those caught up in the crash were Kasey Kahne, AJ Allmendinger, Trevor Bayne, and Cole Whitt. Kahne and Allmendinger still ended up inside the top 20 (17th and 18th) despite failing to finish the race.

Early on, five cautions took out several top contenders within the first 100 laps. Ricky Stenhouse Jr. had two blown tires, and then Kurt Busch spun into Brad Keselowski while leading on a restart. Clint Bowyer also had an oil line failure which sidelined the Stewart-Haas Racing Ford.

Anyone really surprized at this? I’m not! After all, this is one of the playoff tracks, so Chad and Jimmie had a plan. The head games are now in full swing with these two, as the gear change did the job to throw everyone off!

He had a top 5 car without a doubt but no matter how you spin it, this one fell into his lap (again).

Just something about Johnson that makes me flip the channel. He might win 10 plus titles but I struggle to find the respect. Maybe I’m judy an typical example of the dying appeal of NASCAR.

This was handed to him to make a story. Horrible screw job and I’ll never waste 4 hours again.