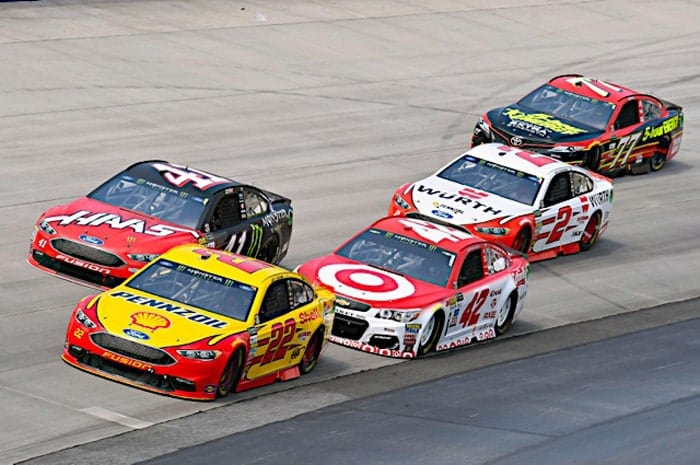 There were just too many laps on the scoring pylon for Ty Dillon.

Grabbing and maintaining the race lead from Ryan Newman, Jimmie Johnson and Kyle Larson in the final quarter of Sunday’s AAA 400 from Dover International Speedway, the single-car Germain Racing team was in the conversation for a race victory for the first time at a non-restrictor plate track.

However, the rookie driver in the No. 13 car lost the top spot to Larson with 39 laps to go, falling to fourth before short track racing’s version of the Big One ended his day on the backstretch on the final lap.

“It was quite the showing for our Germain Racing team,” Dillon said. “I’m really proud of our effort.”

Hanging in the top 10 late, a pit strategy call by crew chief Robert “Bootie” Barker launched the team to the lead, holding it for 27 laps, the most in team history in the Cup Series.

“We proved as a little engine that could that we could go out and run with the big boys,” Dillon said.

Still, the 25-year-old scored the fifth top-15 finish for the team in the opening 13 rounds of the season and sits 22nd in points.

No, your Twitter eyes weren’t deceiving you. A NASCAR fan actually climbed the fence at a Cup Series race for the second time in three years.

The fan, whose name has not been released, was detained by security and ultimately arrested. He was charged with disorderly conduct, resisting arrest and offensive touching on a law enforcement officer.

Held in a jail cell by Dover police, the intoxicated fan must spend at least eight hours in a jail cell by law before a judge can determine bond. No one was injured in an incident deemed so unbelievable some in the media center initially thought it was fake.

The last time a fan climbed the fence, at Richmond International Raceway in September 2014, the race was put under caution to ensure the safety of all involved. It’s a bit worrisome NASCAR didn’t do that again. What if, God forbid the fan fell onto the track under green flag conditions?

There’s a lot more questions than answers at this point as the sport may need to change its security procedures going forward. Fool me once, shame on you; fool me twice….

Boy, what a day for Sunday’s pole-sitter Kyle Busch. And what a week it will be for crew chief Adam Stevens.

Starting from pole for the first time in 25 Dover starts, Busch was on rails in the opening 20-lap run, distancing second-place Martin Truex Jr. by more than a second.

However, the day quickly flew off and rolled down the track as his left-rear tire came loose following the race’s first round of pit stops. In doing so, it’s highly expected that crew chief Stevens will see a suspension lasting at least four weeks from Cup Series competition.

But the day wasn’t a complete disaster performance, as Busch did climb back into the second position at one point in the middle of the event. However, it didn’t last long, as he ended up 16th, one lap down after an unscheduled, late-race pit stop for a loose wheel.

The defending race winner also had a tough day in the Delaware sun as Matt Kenseth could not replicate his winning form from last spring.

Starting in the fourth spot, Kenseth was unable to drive into the lead. Instead, he stayed tight in the top 10 throughout the day before a double pit road penalty damaged the day for the No. 20 on Lap 287. Not only did he speed, but he was busted for a commitment line violation, prompting a pass-through penalty for the Joe Gibbs Racing driver.

Kenseth came home 13th after the late-race crash to bring out the final caution of the day.

When Regan Smith impacted the Turn 2 wall with 69 laps to go, it cemented what was an already bizarre running order up front.

Will track position or tires make it last? Could we have another first-time winner? Or can we see history-tying in order?

When Menard wrecked down the backstretch with 55 to go, it all came together for one 49-lap now-or-never fight to the end.

It went well for Ty Dillon, who held onto the top spot until Larson wrapped around the outside with 39 to go. Truex drove up to fourth spot while Johnson was getting ready for a second-place finish. And then a black line of tire rubber was found in Turn 1, with a flattened No. 38 Ford sputtering to a stop on the high banks, handing one last shot to the driver of the No. 48 Chevrolet.

When Larson spun the tires on the race’s Overtime restart, Johnson pounced just in time for the Big One to end the race on the backstretch past the Overtime line.

Why… was the Monster Mile out in force on Sunday?

The AAA 400 featured 15 cautions, one short of the track record and the most here since 1993. The race was a throwback to a time Miles The Monster ate half the field for lunch.

Rookie Ryan Sieg may have caused the first caution but no one, I mean no one, was safe. Daytona 500 winner Kurt Busch spun out by himself, in front of the field while leading on a restart (Brad Keselowski got collected). Landon Cassill blew a tire but so did Ricky Stenhouse Jr. (twice).

The Ty Dillon wreck was icing on the cake, a sand slip in NASCAR Overtime, causing the classic mini Big One here. Heck, even the drivers contending for the win felt lucky to survive 400 laps.

“I can’t even tell you how challenging this track was with these cars and this aero package and all that,” Martin Truex Jr. said. “I don’t have enough fingers and toes to count how many times I almost wrecked by myself.”

Turns out a set of rules seemingly awful for intermediates fit just fine within the specs of Dover’s one-mile oval. A bunch of early yellows also fooled teams into taking a few too many sets of fresh tires. Tire management became a running theme during the second half of the race as drivers battling handling on a hot, slick surface.

Notice those words hot and slick? Those would also describe the weather at Richmond a few months back, conditions which created the best race in several years at that short track.

Running in the heat of the summer? On a Sunday afternoon? Maybe that’s what this package actually needs to be successful.

How… does Jimmie Johnson do it?

Consider how much was working against the No. 48 team Sunday at Dover. Johnson had to start at the rear of the field after a gear change wiped out his qualifying spot.

39th? For some, that’s a killer, especially at a track where track position is key. For Johnson? Not a problem. He was 25th after just 11 laps and worked his way to fifth by the end of Stage 1.

But that’s where momentum seemed to die out. As the race wore on, crew chief Chad Knaus’ adjustments stalled out; Johnson was a borderline top-five car. Then, he hit the wall shortly after Stage 2 and the Lowe’s Chevy turned to junk.

Johnson kept fading, from second to seventh over a long green-flag run killing his chances. Inexplicably, he stayed out while others pitted around him, leading for the first time on lap 329. He takes a long shot gamble on a Hail Mary caution… and it comes. Without it? Johnson probably runs 10th, maybe worse after staying out so long on old tires.

After that, another yellow flag gives Larson an opportunity to catch up. Johnson gets passed and is clearly a second-place finisher without the late David Ragan wreck forcing NASCAR Overtime. And then, Johnson has to time it just right, have Larson spin the tires and have a wreck happen mere seconds after crossing the overtime line to earn an 83rd career victory.

Some might call it an absurd amount of luck. But you can’t have luck if you don’t put yourself in position. Sunday is the type of fight this team has put up to win seven championships… and then some.

This column was a split between Zach Catanzareti and Tom Bowles.

In my humble opinion, some GREAT racing in Dover! Thoroughly enjoyed this! Felt bad for Ty Dillon, but still a stellar performance from him. Yay NASCAR, you got this one right! The only thing I did not especially care for was finishing under yellow; perhaps the overtime line could be re-thought.

The caution didn’t come out for the fan because Johnson didn’t need it then.

Ain’t that the truth! Same with the lousy attempt to clean up all the speedy dri after the last caution.They didn’t leave that muchon the track after Montoya hit the track cleaner.

I’ve heard a bunch of complaints about the cleanup of the last caution flag. Speedy dry all over the upper part of the race track when they went green (Larson and the pace car actually wiggled going through it) and some suspect that it is the cause of Larson’s poor restart. Word is Fox was running behind getting to NHRA coverage so they did a less than full effort at cleanup to have the race end quicker. If that is all true, shame on Nascar. You also wonder if it was the cause of the final wreck on the last lap too.