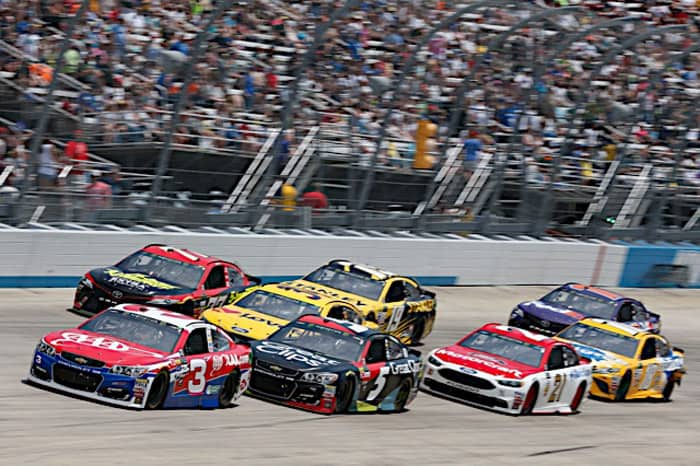 A man who climbed the catch fence at the exit of Turn 4 during Sunday’s AAA Drive for Autism 400 at Dover International Speedway has been charged with resisting arrest with force (a felony), second-degree trespassing, disorderly conduct and offensive touching of law enforcement, according to Dover police.

The man, identified as John Infanti, is a 43-year-old man from Greenwood, Delaware. The incident occurred around 5 p.m. local time.

Track security was ultimately able to get Infanti down from the fencing, where he was then taken into custody by Dover police officers. The police report says Infanti failed to comply with officers’ requests, going so far as to kicking one in the knee.

The track also released a statement on Sunday, stating that Infanti was intoxicated at the time of his arrest.

The statement is as follows: “At 4:58 p.m., a white male subject climbed the fence in Turn 4 of the Speedway. He climbed down and was immediately detained by our security firm, CSC, and turned over to the Dover Police Department. A caution was not thrown.”

This is the second time in three years that a fan has climbed the fence during a NASCAR race. On Sept. 6, 2014, a man climbed the fence at Richmond International Raceway and was charged with disorderly conduct and public intoxication. A caution was thrown at the time for that incident.

Infant(i) is right… what a child. A drunk child, but a child nonetheless.

My first NASCAR race at Michigan back in the late seventies I saw the same thing. We were sitting about 20 rows up and this drunk fan climbed the fence and laid on top of the curved fence waving to the cars as they raced underneath him while still holding his beer can. It was uncomfortable to watch. He was up there for several laps. No security staff saw him and no one made an attempt to do anything. He eventually climbed down laughing and sat down. And the race went on with Buddy Baker taking the checkered flag.

I wonder if he remembers doing it.

I say we just let the Darwin principle take care of idiots like this. Forget about getting hit by a car, the fall alone would kill them.

Lord knows I crawled up a wall or two in my mancave the last couple of years with some of the decisions Nascar has made or some of the things DW has said , but never a catch fence! Everything in moderation.

Dickie is the original this guy just copied catted him