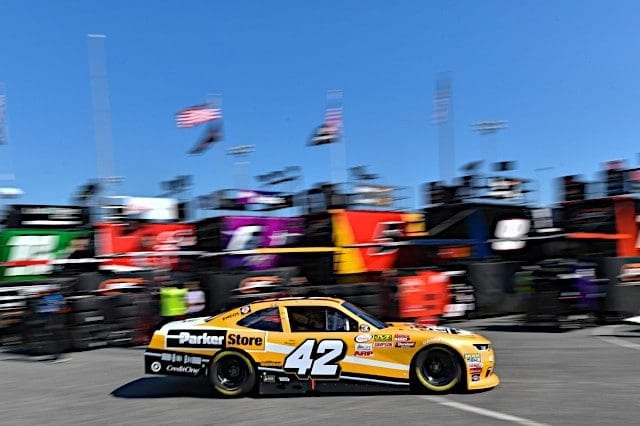 Friday may have been National Doughnut Day, but Miles the Monster was apparently still hungry come Sunday.

Hungry for race cars, that is.

Kicking off the AAA 400 in the hottest conditions of the weekend, Dover International Speedway was a hefty challenge for first-time Monster Energy NASCAR Cup Series racers and champion veterans alike.

With 15 cautions on the day, the 400-lapper never seemed to get rolling.

Ryan Sieg, who made his MENCS debut on Sunday, brought out the first yellow when he spun his BK Racing No. 83 in Turn 1 on Lap 17. Ricky Stenhouse Jr. had multiple tire failures, while Cup champions Brad Keselowski and Kurt Busch crashed on a Lap 67 restart.

Clint Bowyer had his issue 26 laps later before Stewart-Haas Racing teammate Danica Patrick broke loose in Turn 4. In fact, it took until the second half of the event until we saw a green-flag stretch of more than 50 laps, when we had 62 clean laps from Laps 269 to 330.

So it was only fitting to have the race end under caution, giving Jimmie Johnson his 83rd career Cup win, tying him with Cale Yarborough on the all-time wins list. – Zach Catanzareti

For the third time this season, Kyle Larson crossed the finish line first in the XFINITY Series. Through 11 races, six of which Larson has competed in, he is leading the series in victories.

Larson led a race-high 137 laps, dominating the first stage, leading every green-flag lap. Austin Dillon, who scooted into the wall early in the race, stayed out during a late caution to lead four laps, the only other driver to lead in the first stage.

While Larson fell back toward the end of the second stage, he restarted 12th at the beginning of the third stage. It didn’t take long for him to get to the front, though.

Darrell Wallace Jr. came out of the pits first, falling straight backward after getting loose underneath Brandon Brown. That put a damper on Wallace, who was in contention to win the Dash 4 Cash, which would have given him an additional race of sponsorship at Michigan International Speedway. Wallace rebounded to finish eighth, but only is confirmed in the car for next week at Pocono Raceway.

Larson is not scheduled to be in the No. 42 car at Pocono as Tyler Reddick will be making his sixth start of the season for Chip Ganassi Racing. The 21-year-old is coming off his best finish of the year at Charlotte. – Dustin Albino

Following the surprise closure of Red Horse Racing just days after he scored his first top five of the season at Charlotte, Timothy Peters saw a nearly 200 consecutive starts streak end when he was unable to secure a ride for Dover on such short notice. But the former driver of the No. 17 Toyota has landed with MDM Motorsports for Texas Motor Speedway next weekend, according to Catchfence.com.

Peters will be reunited with his 2016 crew chief Shane Huffman. Together, the pair made it to the Championship 4 where a ninth-place finish saw them end the year fourth in the standings.

“I’m looking forward to working with Timothy again,” Huffman said. “I feel we can pick up right up where we left off last year and complete for a top five next weekend. This relationship is a win-win for MDM and Timothy and we’re to go.”

It remains to be seen what’s next for Peters after Texas, though it wouldn’t be the least bit surprising to see him pick up rides each week, or a long-term solution to keep him on track. – Beth Lunkenheimer

NHRA: Girls Can Racecar, Too

Epping, New Hampshire was friendly to the ladies as Brittany Force scored the win in Top Fuel, while Erica Enders got the Wally in Pro Stock at the NHRA New England Nationals. Only Matt Hagan kept it from being a female sweep when he beat Courtney Force in the Funny Car final.

Brittany Force squared off against Antron Brown in Top Fuel. Her run of 3.716 seconds at 331.69 mph was enough to edge out Brown’s 3.728 seconds at 32798 mph. Force also got by Steve Chrisman, Troy Coughlin Jr. and Shawn Langdon in earlier rounds.

“We had really been struggling and we got lost for a while, but we really seemed to figure it out at Topeka,” Force said. “I knew we had a good race car, we had our Monster car back, our team back, and I knew that first win was right around the corner.”

Two-time champion Enders had a rough season last year, going winless after a manufacturer switch for her team. Back in their familiar Chevrolets this season, things have been steadily improving. Enders finally put a notch in the win column with a 6.534 second, 213.16 mph run to best rookie phenom Tanner Gray’s 6.550 seconds at 212.06 mph.

“People always ask which win means the most and right now I can’t imagine one meaning more than this,” Enders said. “What a huge relief. What a special moment for all of us on this Elite Motorsports team. Money can buy a lot of things but you can’t buy the drive to win this group has inside them.

“I didn’t want to give up anything today. In fact, I wanted to have my best day behind the wheel that I’ve ever had. I have always prided myself on what I can do in the driver’s seat and today I feel like I gave it all I have.”

Enders had a bye run in round 1 after Shane Tucker was unable to make the call and then beat Jason Line and Bo Butner on holeshots en route to the finals.

Hagan played the spoiler to the possibility of a female sweep when he beat Courtney Force in the Funny Car final. Hagan’s stout 3.897 seconds at 332.59 mph was enough to best Force’s 3.927 seconds at 332.34 mph. Hagan beat John Force, Del Worsham and teammate Tommy Johnson Jr. in earlier rounds. Force did halt reigning champion Ron Capps’ winning streak at four when she took him out in the semifinal round. – Toni Montgomery

Graham Rahal became the first driver to sweep a dual-race weekend in the Verizon IndyCar Series since Scott Dixon did so at the Toronto street course in 2013.

In Saturday’s race, Rahal started from the pole and led all but 15 laps to capture his fifth career win. It was a drama-free day for the Rahal Letterman Lanigan Racing driver, while Dixon and James Hinchcliffe finished second and third, respectively.

On Sunday, Rahal started third and led 41 of 70 laps. However, the victory in race No. 2 didn’t come as easily as the first. With four to go, Hinchcliffe and Spencer Pigot suffered mechanical failures and brought out a red flag with Rahal in the lead.

Josef Newgarden, on fresher tires, was running about a second per lap faster than Rahal before the red flag. It looked like Newgarden would have a chance to steal the victory when the field was bunched together for the final restart, but Rahal held off the Team Penske driver to become the first multiple-race winner of the season.

Next weekend, the series visits Texas Motor Speedway for the Rainguard Water Sealers 600. Who’s the defending winner? You guessed it: Rahal. – John Haverlin

Saturday’s Chevrolet Sports Car Classic is likely going to go down as a race to forget for Kenny Habul and SunEnergy1 Racing.  Habul didn’t even get to the green flag before the problems began.  Unusual ones at that.

During the pace laps, the left front wheel exploded on Habul’s Mercedes-AMG GT3.  Habul was able to get back to the pits and get the tire changed, but he was forced to drive around at the back of the field at a reduced pace.  The car was down on braking power after the wheel issue.

25 minutes into the race, Habul was the last car running on-track and just hoping to keep in front of GT Daytona class leader Lawson Aschenbach.  Suddenly, the car lost all braking power and went straight into the tires at turn 3, taking Visit Florida Racing’s Renger van der Zande with him.

What happened?  The brake caliper apparently cut through the wheel.

Habul was able to limp the car back to the pits once he got himself out of the tire barrier.  However, he was still done for the day.  Tristan Vautier was never given the chance to get in the car.  – Phil Allaway