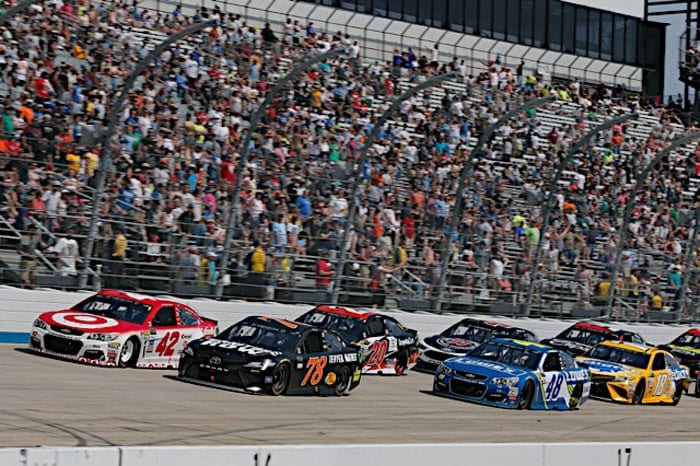 If there is one common thread in NASCAR these past couple years, it would be incessant rule changes. And after Sunday’s race conclusion it looks like we might need another. The overtime line rule was first introduced in 2016 but given the way the final caution played out a tweak might be in order. It took a little bit of scrambling from Mike Joy and the team in the booth but they figured out quickly enough that Jimmie Johnson was indeed the race winner. And that’s all well and good but didn’t it leave a sour taste in the mouth given the way things were shaping up. It’s an opinion shared by the sport’s most popular driver. “I kind of helped come up with that idea, so this is going to be kind of strange, but I think they should get rid of the overtime line at all the racetracks except for Daytona and Talladega,” said Dale Earnhardt, Jr. in his Sunday evening post race Periscope broadcast. “I think we should race it out everywhere. And no overtime line, just keep on doing green-white-checkereds until you get it right everywhere.” Amen to that, Dale Junior, Amen to that. I couldn’t have put it better myself.

Thirteen Cup races are in the books and with that we are already halfway to the 2017 Chase – sorry, Playoffs – that’s going to take me some more getting used to, I guess. I think it’s fair to say we’ve seen something of a mixed bag this year so far with some excellent racing on the short tracks (Bristol, Martinsville, Richmond) and some less good racing on the aero dependent “cookie cutter” tracks — Kansas being the lone and honorable exception. We’ve seen some first-time winners (Ricky Stenhouse, Jr. and Austin Dillon) which is always a special moment in a sport where it is extremely hard to win. Plus, we had an unexpected winner in Ryan Newman who gambled to great effect at Phoenix International Raceway. Veteran champ Kurt Busch finally won the Daytona 500 in a Monster Energy livery to boot which was great for the incoming title sponsor while the All-Star race was at best confusing and largely tedious. And this non-points paying race is something NASCAR really needs to fix moving forward but all things considered, it’s not been too bad a season. Here’s hoping it just gets better from here on in.

I’m going to be honest here so don’t get mad. Typically, when Jimmie Johnson wins a race I turn off right after the checkered flag and don’t even bother with Victory Lane celebrations. That’s not a diss on the seven time champion, I promise. Rather he’s been there and done that so many times: 83 in 556 races to be precise – a 15% clip which is ridiculously good when you think about it. But this time around I was glad I watched. Johnson, who with the win tied his boyhood hero Cale Yarborough for sixth place on the all time list, was particularly excited, sharing a childhood story and holding his Yarborough inspired tribute helmet up to the camera. And for a guy that has been there, done that and won just about everything you can win, it was great to watch. I know a lot of folks like to devalue his titles due to format but the one thing you can’t argue with is race wins. The real question with Johnson is how many more wins can he manage before he hangs up his driving gloves. At this rate, my guess is a lot more. Whether he can catch up to David Pearson (105 wins) remains to be seen but he should end up eclipsing former teammate Jeff Gordon (93 wins) before it’s all said and done.

FOUR: Next Up, The Tricky Triangle

I love Pocono Raceway. I really do. It’s a track I’ve seen a race at on three separate occasions and I’ve alsohad the chance to run eight laps in a stock car with the driving experience school there back in 2010. Added to that epic experience, I also got a chance to chat with Doc Mattioli after my hot laps and he was as advertised – an absolute gentleman. He is much missed, that’s for sure. This will be Cup race number 79 at the tricky triangle a continuous stretch that runs back to 1974 when the King himself won the first race at the venue. Last year’s races were won by Kurt Busch and none other than Chris Buescher who picked up a rain shortened maiden Cup victory. Dale Earnhardt, Jr. swept both races in 2014 so this race will certainly represent a good chance for him to pick up a much-needed victory. It will also be a big race for Darrell Wallace, Jr. who will make his Cup debut, picking up the driving duties in the iconic number 43 for the injured Aric Almirola. Good luck to Bubba on his debut. Here’s hoping it is the first of many.

FIVE: How important will stage wins be?

The truth is we don’t know quite yet but with 27 of the 53 total stage playoff bonus points awarded in the regular season let’s take a quick look at the tally. Martin Truex, Jr. leads the way by quite a margin with eight bonus points while Kevin Harvick, Ryan Blaney and Kyle Busch have three points. Brad Keselowski, Chase Elliott, Denny Hamlin and Kyle Larson have two apiece with Joey Logano and Matt Kenseth bringing up the rear with one point each. Johnson, meanwhile, has three wins and no stage points just for comparison. 26 points remain up for grabs — unless NASCAR add some hitherto unplanned additional stages – and I’d expect the competition to heat up as we get closer to the playoffs and drivers gamble even more. We’ll likely only really know the effect of these points once we’re all said and done in 2017. It will be interesting to see it play out.