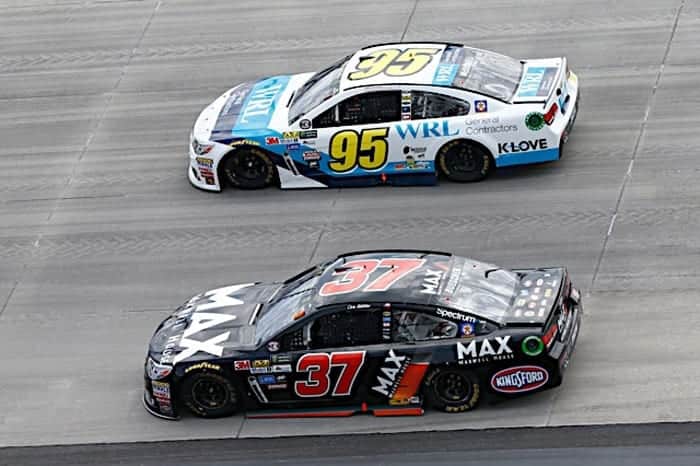 It’s not unusual to see a handful of smaller teams crack the top 20 on a weekly basis, with one or two making it into the top 15 or the top 10.  Top fives are a rarity…but what about a win?  Can an underfunded team actually win races?

Since they have won here and there, it’s hard to say no outright.  Chris Buescher won at Pocono last summer.  AJ Allmendinger won at Watkins Glen in 2014, and David Ragan powered to the win at Talladega in 2013. Furniture Row Racing was still a small team when their successful run began and then snowballed, and Wood Brothers Racing is not quite at elite level yet right now but has looked like they could break through with a victory.

But it’s hard to say that one of these teams could win any given Sunday.  As strong as Ty Dillon’s run was at Dover this weekend, he was running for a top five.  Kyle Larson passed Dillon for the lead with 40 laps to go and realistically, that was all she wrote.  These teams simply don’t have the equipment to be even a collective threat at most tracks.

On one hand, that’s not a great thing for the sport, and certainly hurts the teams.  It becomes a vicious cycle: a team underperforms, they go unnoticed by the television broadcast and by extension, the fans, and sponsors turn away. There’s no way to make that into a good thing.

But, it’s also true that people love a good underdog story, so when one of these teams can provide that, they do get a lot of press.  Look at it this way: if Kyle Busch or Kevin Harvick or any of a handful of top drivers had led a handful of laps at Dover but never really been a threat to win, even a top five wouldn’t get them much notice.  You might see a quick interview after the race and some mention, but Dillon’s strong run resulted in extensive talk and a lot of Monday-morning sidebars on his day.  It’s a better story than the same old, same old for sure.

The moral of the story is that most of these teams aren’t going to suddenly start winning.  For some of them, a top-25 run is a great day.  But they do have a certain appeal because of their underdog status.  If the fans had a chance to know a bit more about them, it could be good for the sport overall, but we’re not there yet.

Top of the Class: Dover I

After leading 27 laps on Sunday, Ty Dillon was gunning for a top-five finish, and he might have gotten it if not for a spin on the final lap in overtime.  Dillon, who led after pit strategy put him in front, still managed to limp home 14th, so it was still an excellent day for his Germain Racing team. While it seems a bit contrary to put drivers who crashed in the best in class category, it’s hard to argue that Dillon and Co. still had a strong day overall.

AJ Allmendinger also got bitten Monster Mile in the closing laps, but was scored in 18th place when all was said and done, so it’s hard to call the day a failure.  It’s hard to call it a real success either, but like Dillon, he had a strong enough finish to still finish ahead of the rest of the small teams.

Michael McDowell has been solid of late, perhaps the most consistent of the Richard Childress Racing –affiliated drivers, and it’s no surprise to see him with a good finish to show for it, in 19th.  Also taking home a top-20 in his Cup Series debut was Ross Chastain.  Chastain ruffled a few feathers along the way, but all in all, his race for Premium Motorsports was a good starting point for the rookie.

Another driver who suffered a late-race problem but had a solid finish was Cole Whitt, whose strong performances with TriStar Motorspots continue to be impressive.  Whitt is credited with a 22nd-place finish this week despite his late mishap.

Chris Buescher finished 23rd, and that’s a pretty decent day as well…and it’s Buescher’s worst finish in the last five races.  In his second full season, Bueascher has shown real improvement, posting an average finish off 22.9, up three spots over last year. JTG Daugherty definitely had some growing pains while expanding to a two-car operation, but they seem to have put those behind them and both Buescher and Allmendinger are showing better results.

One thing that’s often overlooked in race strategy is the ability to capitalize on attrition.  Several teams were able to hang in there and post decent finishes by racing the trick Dover track while others fell by the wayside.  Gray Gaulding (24th), Ryan Sieg (26th in his series debut), Jeffrey Earnhardt (27th), Timmy Hill (28th) and Matt DiBenedetto (29th after two in-race battery changes) all had top-30 runs because they were able to stay patient and still be running at the end. It wasn’t a great day, but it was the kind of day that cam man a points position or two at the end of the year.

Remember that line about racing the track and gaining because you were there at the end?  The drivers at the bottom of the small teams list (and some from the elite list as well) all saw their race end early after a crash.  David Ragan almost made it to the finish, but a pair of flat tires and a late incident ended his day a few laps early (and set up the overtime melee that claimed 9 others) in 30th.

Ryan Blaney was running at the end in 31st, but for the second week in a row, a broken axle meant a few laps in the garage for repairs.  That’s something his team needs to diagnose and treat if they have playoff hopes.

Bowing out early after on-track incidents were Regan Smith (34th due to an accident), Cody Ware (35th with a mechanical failure), and Landon Cassill (36th after a mid-race wreck).  If there’s a consolation here, it’s that they weren’t alone; Kurt Busch, Brad Keselowski and Ricky Stenhouse, Jr., all race winner s this season, all finished behind Cassill.  Dover didn’t play favorites when it came to attrition.

“Hulu is driving the next generation of TV, and Jeffrey Earnhardt represents the next generation of racing, so this is the perfect partnership to bring our brand to NASCAR fans,” said Patrizio Spagnoletto, Hulu’s Vice President of Subscriber Acquisition, in a press release. “As a proud sponsor, we’re beyond excited to work with – and cheer for – Jeffrey and the entire No. 33 team.”

The team hauler of the No. 32 Go FAS Racing cars for Matt DiBenedetto was involved in an accident while entering Dover International Speedway last Friday.  Nobody was injured and the team’s race equipment was not harmed but the hauler and rented tractor truck were damaged when a garbage truck sideswiped them.

Richard Petty Motorsports announced that Darrell Wallace, Jr. will plot the No. 43 car in the Cup Series until Aric Almirola is ready to return to the seat after injuring his back at Kansas.  Wallace, who sits fourth in Xfinity Series points, was to be without a ride after this weekend’s NXS race at Pocono after his No. 6 Roush Fenway team could not secure sponsorship.

“Driving the famed 43 car is an unbelievable opportunity for any race car driver,” said Wallace in an RPM team release Monday. “With all that Richard Petty has contributed to the sport, I’m honored to start my first Monster Energy NASCAR Cup Series event with this team. I’m incredibly grateful that Ford, Richard Petty Motorsports and Smithfield have the confidence in me to help fill the seat until Aric (Almirola) fully recovers, which is the most important piece of this. Moving up to the Monster Energy Series is a tremendous challenge, but I am ready to represent this organization, help the 43 team get the best results possible and prove that I belong at this level.”

We've got a whole lot of fight in us at @GermainRacing proud of my boys! #dontcountusout #nascar #nascarfoxsports

Overcame 1 flat tire early on, but the 2nd did us in. @Overtons #38 team did a great job all day. We will regroup and head 2 @poconoraceway

Twerking at the gym ? pic.twitter.com/tdB7aMWHqo

Haha I'm not sure anyone needs to see that https://t.co/W4V6w39Ubi

Haha I'm not sure anyone needs to see that https://t.co/W4V6w39Ubi

Ok… then we go straight to the golf course for a round. Double or nothing https://t.co/BwR4SECv8I