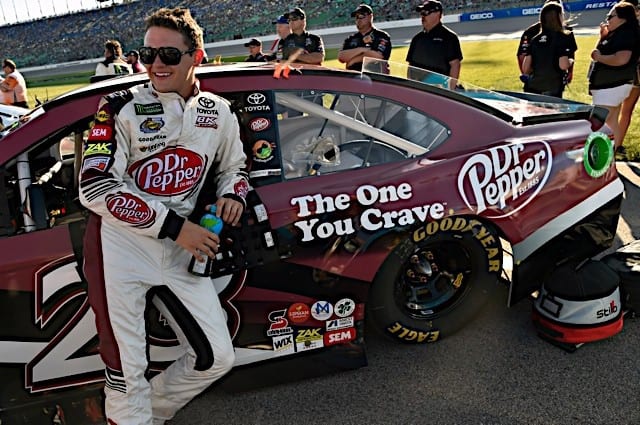 Late into the NASCAR off-season, Gray Gaulding found himself in a predicament, where he landed a ride at BK Racing. However, he knew it would be a struggle.

Running in only 15 combined NASCAR races between 2014 and 2016, Gaulding was jumping into a ride that finished 34th in owner standings, with David Ragan, a veteran of the sport at the helm.

There would obviously be growing pains for both driver and the team through the first couple months of the season. But recently, the performance has picked up.

Missing the season-opening Daytona 500 due to not having enough experience, Gaulding has competed in 12 races this season. He brought the No. 23 car home in 20th position at Talladega Superspeedway, a career-best for the 19-year-old. At Dover International Raceway this past weekend, the team finished 24th, a season-best on a non-restrictor plate track. The performance equaled Corey Lajoie, Gaulding’s teammate, as the best finish for the organization on a non-plate track in 2017, which the No. 83 team pulled off at Bristol Motor Speedway.

At Dover, Gaulding sat down with Frontstretch to discuss his season, looking forward in the second half of the season and if he belongs in the Cup Series as a teenager.

Dustin Albino, Frontstretch.com: This season you sit 36th in points, but came into the season only competing in two Cup races ever. How hard has the first three months of the season been on you?

Gray Gaulding: I think it’s been pretty good. There have been a couple places where we had some bad luck, but we’ve been able to put a few good finishes together lately. We finished 20th at Talladega, 27th at Charlotte, which every week our goal is to break into that top-28 bracket and try to get better so we can get into the top 25 on a more regular basis.

Albino: Do you look at points, or is it just about keep improving every week?

Gaulding: I really don’t care about the points, it’s just about the next race. What happened the week before is old news and I’ve just got to concentrate on the upcoming race. The bad luck hurt us in the points a little bit, but the more solid finishes we’re having lately is kind of bouncing us back and hopefully in the next few weeks we can jump up a spot or two. Mainly, it’s just week-to-week and concentrate on the next race and learn as much as I can, then take what I learned from the last race and use it for the next race.

Albino: Are you scheduled to be in the car for the remainder of the season?

Albino: Where do you think the bright spots have come this season?

Gaulding: I feel like our mile-and-a-half program has gotten a lot better. We started off the year a little bit behind, more than we would like to be. At every mile-and-a-half we’ve gotten better. We ran pretty well at Charlotte. We struggled a little bit early, but once we made adjustments the car came to life and we drove into the top 25, which is really good for us.

We have some short tracks coming later in the year that I will like to be good at. Martinsville wasn’t too bad for us, but I feel like we have to improve on our short track stuff. We’re getting there and we’re making gains.

Albino: How difficult is it to not have a teammate with experience to lean on?

Gaulding: Corey [Lajoie] has been around for a long time. We’ve raced each other for a while in K&N, even though I’m six years younger than him. He’s definitely got more experience than me and he has run in more series than me. A lot of the tracks that I haven’t been to in a Cup car, or period, he has been able to help me on those tracks because he has either been there in XFINITY or Truck or K&N. Overall, Corey has been a good help. He’s a smart driver and I feel like he and I have similar driving styles, we’re both pretty aggressive and that kind of helps.

Albino: Who has helped you the most in your rookie season?

Gaulding: That’s what is cool, they are all pretty good. Dale Earnhardt Jr. and Jimmie Johnson have been really good and I’ve been able to talk to them some. I’ve talked to Denny Hamlin and Kyle Busch a little bit. But all of those guys have been really good as far as me going to them for advice because some have been in this Cup Series as long as I have been alive. They’ve been able to go to every track, feel different changes and that’s all I’m trying to do. I’m basically a sponge. I’m trying to take as much information as I can learn and translate it to the next year and the year after that and down the road in my career. It’s been nice to go to guys and here their take on things.

Albino: Has anyone ever turned you down?

Gaulding: No, everybody in this garage is approachable. It’s almost like a brotherhood. We’re here every week together. We see each other, we’re always together for every weekend Thursday through Sunday. I’ve been able to talk to a few people and they have been pretty cool.

Albino: Was it disappointing to never have a full-time ride in other top divisions before jumping to Cup?

Gaulding: Unfortunately this sport takes funding and it takes the money to get in those right rides. I’ve been fortunate enough. Me, my dad and my manager Rusty we’ve worked really hard to get me to where I am today even off the track. It’s a lot of hard work off the track. Unfortunately, I didn’t have that one main partner to get me over the hump to get me that one ride in the XFINITY Series with a top team.

I know with the equipment that I’m in, I’m not going to go out and win, but I need to get better. The goal for us is to keep getting better. If people see that I’m getting in this car and me and my team are able to run top 25 and in the top 30 range, that will be good for not only myself, but the team as well. It’s been tough coming to the Cup Series with not much experience, but at the end of the day I feel like I can get the job done.

Albino: Did you know what you were getting yourself into when you accepted this ride into Cup?

Gaulding: No, not really. You don’t really know until you’re in there competing against these guys. The Cup Series is the best-of-the-best. It’s the top drivers that are on top of their game every single week and have been doing it for the last 10-15 years. I came into it open-minded. I’m very fortunate to be one of the best 40 in the world in the Cup Series. I feel like as a rookie, I’ve been able to do a good job of going out there and hustling the car, pushing it to its limit as hard as I can.

Albino: You’re 19 years old. Do you feel like you belong in the Cup Series at this age?

Gaulding: Yeah, I definitely do. I’m not going to sit here and say I don’t think so. I don’t think there is anybody in this garage that is going to work harder than me, wants it more than me. I want this so bad. Being here, I feel like I’m in the right place. I know I’m the youngest guy out there and I am learning.

As far as ability, I really feel like I can run with these guys and run with the best-of-the-best. I’m very confident in my ability and what I can do behind the wheel, not in a cocky way, but every time I strap the helmet on if we were in the same exact equipment as the guys around us, I can beat them. I definitely feel like the hard work at me and my team have put in to get into this sport, there is no doubt we deserve to be here.

Albino: Do you feel like you only get one shot at the Cup Series?

Gaulding: Yeah, I feel like no matter what equipment you’re in, and I might not be in the best equipment, but I’m out there making the best of my car and as a team we’re doing the best we can do. Hopefully I can get a call from one of those bigger teams that realize what I’m out here doing in this can and in this equipment. I feel like as a driver you get one shot at that, but that one ride is what I’m waiting on to go out and win races.