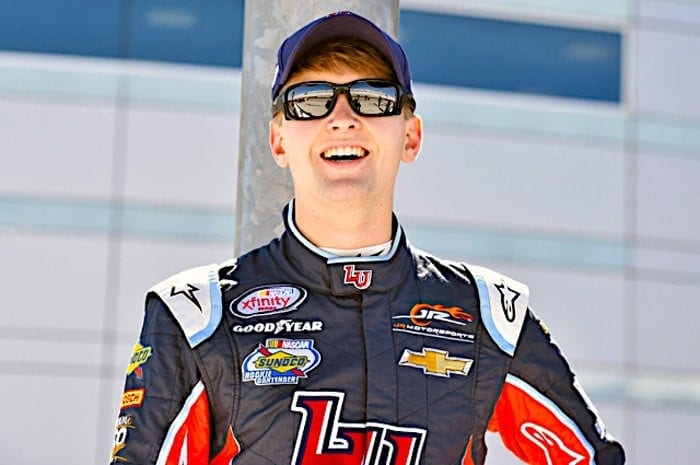 On the heels of winning seven Camping World Truck Series races in 2016, there were high expectations for William Byron making the transition to the XFINITY Series for JR Motorsports in 2017.

Through 11 races, he has not disappointed.

Sure, the No. 9 car has not yet gone to Victory Lane, but winning the Dash 4 Cash, and an additional $100,000 on Saturday at Dover International Speedway sure doesn’t hurt. It can go a long way, buy a lot of textbooks and make a 19-year-old rookie driver’s season. But it hasn’t. Byron won’t be satisfied until he picks up a checkered flag.

“We definitely want to run for some wins,” Byron told Frontstretch. “I’m really looking forward to the second half of the year, and we’re kind of at the one-third part. I’m excited for the summer. I think there are some good tracks there for us.

“I think just some our speed has been good at times. We’ve executed races well. and we’ve had good pit stops.”

Competing for JR Motosports comes with its own set of standards and expectations. Currently, Byron sits third in the championship standings, 57 points off the lead, which is held by teammate Elliott Sadler. In the middle of the Nos. 1 and 9 cars sits Justin Allgaier, another JRM driver.

Even with the pressure to perform, Byron enjoys having Earnhardt as an owner.

“He is somebody that is really personable and is able to give good feedback and advice to us,” Byron said of Earnhardt. “He keeps things pretty simple and I like that approach. It’s refreshing.”

In the first 11 races, Byron has six top-10 finishes, with a best result of fourth coming at Phoenix International Raceway, the same track that he recorded his first career pole. His worst finish of the season came at Talladega Superspeedway, which was notable because that’s where the North Carolina native got his best advice from Earnhardt.

“He’s given me some advice on Talladega on how to get runs and make the most of your passes,” he said. “He’s given me advice there and that was probably the biggest thing. Unfortunately, we didn’t get to run that race, really. We got into that big crash early, but worked our way up to sixth or seventh.”

When it comes to Earnhardt reaching out to help his drivers, the drivers must go to him. If he sees anything in their game he can help with, sure, he may go to him. But if they want advice on a particular part of their performance from a driver that has a lot of experience in the Cup Series, they must reach out.

“You have to go seek advice from him,” Byron said. “Those guys are busy. Any of the Cup guys, it’s your responsibility to go to them and ask them questions. It’s not their job to come back and help you, but they will give you advice. Jimmie [Johnson] and Chase [Elliott] have done that for me.”

Driving in the same No. 9 car that won the 2014 series championship with Chase Elliott behind the wheel, Byron believes there is a”big” following with his race team. Thus far, the rookie driver has led 19 laps and recorded a stage victory at Texas Motor Speedway. He has also posted the third most stage points in the series with 66 points. The trio of JRM drivers are the first three in terms of stage points.

Last season, Byron competed for another NASCAR veteran, Kyle Busch in the Truck Series. However, the personalities of Earnhardt and the 2015 Cup Series champion are totally different.

“Kyle was really hands on. He is very involved with KBM,” Byron said. “He’s a guy that lays it for us. He would tell us the truth of what he is seeing. Sometimes it was harsh, but it helped me a lot. Kyle helped me a lot and I’m really grateful for the support he gave me last year.

“Dale is really personable and he’s good to reach out to. Kyle is running the truck some, so I think that’s where Kyle is hands on, just when he is at the same race. The same thing with Dale, he is going to run a few races next year so that will be good to learn from him. It’s kind of a different deal with Kyle running the races.”

The XFINITY Series is heading to Pocono Raceway this weekend. In one career start at the Tricky Triangle in the Truck Series, Byron dominated leading 44 of 60 laps, en route to his fifth win of the season.