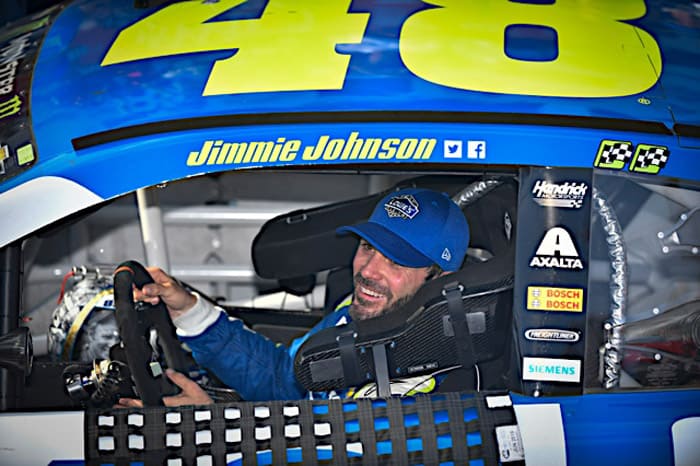 This past weekend at Dover International Speedway was a crash course in, well, crashing.  Sheet metal suppliers must have been in love with the races, if that’s what you want to call them, because for much of each event they resembled demolition derbies rather than examples of racing par excellence.

Blame it on whatever you like, or whatever the mouthpieces are saying, but last weekend was not a great example of racing.  In a way, however, that’s great.

Without the occasional stinkfest, where laps under caution come to feel like a normative concept, it’d be more difficult to enjoy when everyone is actually ripping around the track.  Expect a return to racing this weekend at Pocono – and perhaps, maybe just perhaps, we’ll all see one of those endangered species in NASCAR…green flag pit stops.

Happiness Is… Defending.  That Jimmie Johnson character won again at Dover.  That means that he’s won every race that has been held at the track since The Simpsons debuted.  Or maybe it just seems like it.  With his latest triumph, Johnson has now tied Cale Yarborough with 83 wins, while also amassing seven championships, and probably saving numerous kittens who found themselves stuck in trees.

To say that Johnson has been successful may be an insult to the definition of success, but ever since Rick Hendrick made Johnson and his crew chief Chad Knaus sit down over milk n’ cookies, they’ve turned the Cup Series into their own playground.  They’ve been challenged a few times but Kevin Harvick’s and Kyle Busch’s championship have been but mere interruptions in their chase to make the case for the greatest NASCAR duo ever.

Yet for all of Johnson’s awesomeness, he’s never quite won over the fans.  And yet, for some reason, pundits continue to write columns extolling how Johnson’s accomplishments should be embraced, enjoyed and savored.  Even our own Tom Bowles got into the act this week with his column “When Will JJ Get His Due?.”  Enough already.

For whatever it’s worth, Johnson has failed to resonate with a large portion of the fanbase, and that’s just how it is.  And it doesn’t matter.  He’ll keep winning races, and fans will still react with a harumph or collective eye-roll, and writers will react by breaking down how amazing he is.  What matters is when Johnson finally parks the No. 48 after his last ride, he’ll have etched his name in the books and will be doing so with eight, or maybe more titles.  Now can everyone just save their time and energy about this whole thing and move along and be happy?  We’ll all feel better.

It seems that Fernando Alonso’s participation in the Indy 500 has brought an ongoing spat of words between treble Formula 1 champ Lewis Hamilton and, well, the whole of IndyCar.  Hamilton’s comment that “I looked at the times and, frankly, for his first ever qualifying, for Fernando to be fifth – what does that say about Indy?” started the squabble.  Tony Kanaan responded by saying, “What are you going to say? [Hamilton] raced two cars last year and finished second so I can’t think I can say a lot about him.”

Both drivers are bringing some interesting points of view and both are, in some ways, right.  What’s wild is that we rarely see or hear drivers of different series going after each other – especially when they don’t seem to have any stakes in the game.  This kind of tiff is usually reserved for fans, so it’s kind of fun to watch.

The fact that it seems to linger with the IndyCar drivers is also fascinating as Graham Rahal, who swept the weekend races in Detroit, still felt the need to comment.

“When I saw Lewis Hamilton’s comment… it took me everything I had in my body not to say something. Legitimately, in Formula 1, over his entire career, it’s been a two-car race, four max. IndyCar racing, this is the seventh race, seventh different winner,” he said. “That doesn’t happen in other motorsports, period.”  Your turn, Mr. Hamilton.

Happiness Is… TTs.  It’s time for the obligatory mention of the lunatics riding motorcycles on the Isle of Man.  This past Sunday kicked off the weeklong Isle of Man TTs, featuring a number of races on the closed-street course that winds through countryside and towns over 37 miles.  The track being narrow is one thing but the fact that no SAFER barriers line the course demonstrates both how much skill these riders have while acknowledging that every time they climb aboard could be the last.

Crashes are not uncommon and when the things that can slow a fallen rider down are welcoming obstacles like curbs, walls, trees, and buildings it’s no surprise that death is not uncommon.  Already this year British rider Davey Stewart succumbed to injuries.  It would be great if he were the last.

So if you’ve got a second, watch live through YouTube or check it out on Velocity as they have a daily race recap show.  If these daredevils aren’t some of the most courageous motorsport competitors on earth, then it is tough to know who is.  To watch them speed through the terrain at speeds approaching 160 MPH is quite the spectacle.

Absolutely right about the Isle of Man event. No fan of motorcycles or motorcycle racing however its still an amazing event to watch.

Well said regarding Johnson. Fans don’t have to like a particular driver, there’s no rule that says they have to and while writers can also write whatever they want on the topic as well, I choose for myself whether to root for a particular driver or not AND also whether or not to read articles on the subject as well.