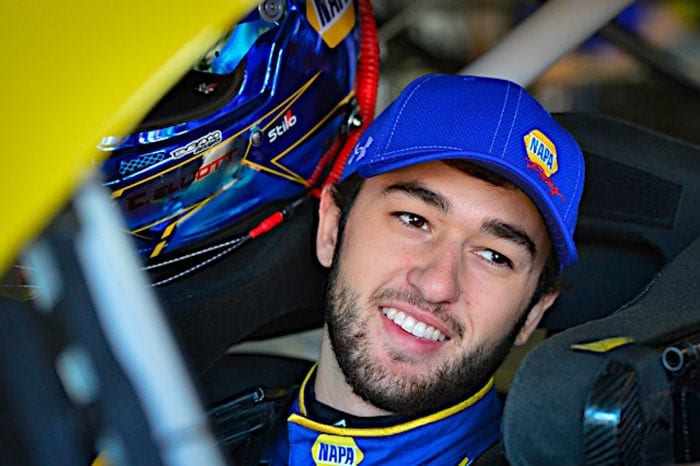 It’s actually a bit surprising that Elliott hasn’t gotten a win yet.  He’s come close quite a few times, leading multiple laps at Phoenix and Martinsville as well as in the Daytona 500. May was difficult for the 21-year-old second-generation driver, with a best finish of 24th, but June kicked off with a top five at Dover, and Elliott is driving some of the best equipment in the garage for Hendrick Motorsports.  However, HMS has been just a tick behind this year with three of its four cars lagging behind the competition.

Still, the team is one of the best in the garage, and Elliott, the 2014 XFINITY Series champion, has shown he’s got the chops to race with anyone on the track. You have to think he’ll visit Victory Lane soon, and his experience with a top team puts him at the top of the list to make that trip.

Jones is considered the top prospect for Joe Gibbs Racing, though he’s getting his first taste of Cup seat time with affiliated team Furniture Row Racing.  That’s not a bad thing by any means; FRR has been strong all year, and with Martin Truex Jr. winning at Las Vegas and Kansas, it can be argued that right now, FRR is the strongest Toyota team. While it’s taken a bit to adjust to a second car, Jones and his No. 77 team are showing flashes of the talent they have on tap.

Like Elliott, Jones, 21, already has a NASCAR national touring series title under his belt as the 2015 Truck Series champ. He’s been rock solid at Bristol, with a pair of XFINITY Series wins, but he’s also been strong on the intermediate tracks, where FRR shines as well.  As the series visits tracks for the second time this summer and fall, look for Jones to get better and better.

Blaney has come tantalizingly close to already having a win sticker or two on the Wood Brothers No. 21.  He’s got the speed and the talent to get there, especially as his teams steps up its program with an alliance with Team Penske.  He’s one of two on this list without a national NASCAR title, but he has nine wins combined in Trucks and NXS, with the most recent being just a couple of weeks ago at Charlotte, so he’s no stranger to winning.

What Blaney and his team still need is consistency.  In the last six races, Blaney has a top five (Kansas) but five finishes of 24th or worse.  Part of that is a team that’s still readjusting to full-time competition.  As any race winner will attest, the key to winning races is first to be in the position to win.  Once Blaney and Co. are able to do that week in and week out, it will only be a matter of time until they break through.

Rushed into the Cup Series at least a year early, Suarez has had the unenviable position of filling the seat for Carl Edwards, a Cup Series winner and title contender.  Early on, he didn’t look ready, but he’s gotten steadily more comfortable in the car. He’s got four top 10s this year, including two in the last three races, and we’re hitting the time of year when the Cup Series visits tracks for the second time, so expect a stronger performance in the second half.

Suarez may still be a year away from Victory Lane; he hasn’t been consistently strong enough to get than “he’s going to win soon and win often” look that some drivers get, but he does have the look of a young driver who’s doing everything right and learning what he needs to be that driver down the road.  The wins are going to some to the defending XFINITY Series champion, it’s just a matter of when.

You read that right.  McDowell is doing everything right while racing for an underfunded team.  His No. 95 Leavine Family Racing team has a technical alliance with Richard Childress Racing, and while it’s a safe bit that RCR is throwing more support at the No. 13 of Ty Dillon, McDowell has been quietly impressive this year and much of last as well. He’s finished in the top 20 the last three weeks, at tracks where a top 20 is a good day for a small team.  He won driving an RCR XFINITY car last year at Road America and he’s strong on the plate tracks.  Among the small teams, McDowell may well be the best bet to grab a surprise win at Daytona or Talladega, or even this month at Sonoma.

Maybe the intent was winning for the first time but seeing as it doesn’t say that I’m going with Kyle or Matt.