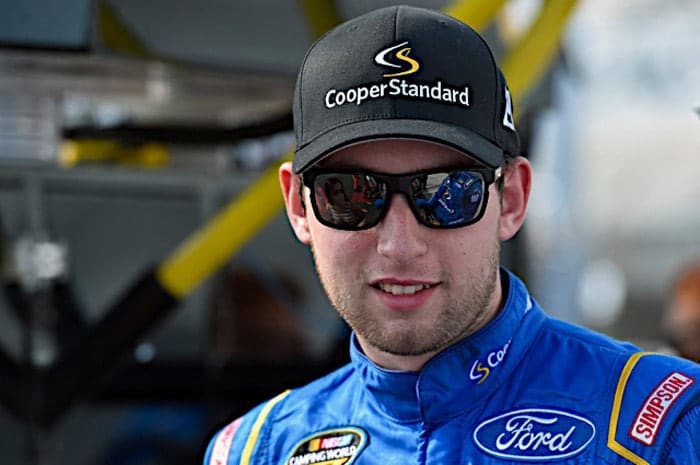 Dover started off rough and turned quite well for Chase Briscoe, who’s currently just six races into his Camping World Truck Series rookie season. After struggling a bit in practice, the 22-year-old put his No. 29 Ford on the pole for the first time at Dover.

Though he had nothing for Ryan Truex, who started second, on the initial start, Briscoe remained inside the top five for much of the race.

But then it all went sideways. A scheduled green-flag stop during an extended run ended with the jack dropping before the left front tire had been secured. The result saw the tire spinning off the truck and causing significant damage. Briscoe, however, ultimately ended up 12th when the checkered flag flew.

Crew chief Mike Hillman Jr. was called to the NASCAR hauler to discuss the incident with officials.

“I think the (air) gun was in reverse,’’ Hillman told NBC Sports. “Being in the first stall … you don’t have a chance to stop on pit road and fix it. You’re hollering ‘Stop! Stop! Stop!’ When he stops, the tire came off.

“It’s a safety thing. We’ll see what NASCAR has to say and work through it.’’

Sunday afternoon during the Cup series race, a similar incident happened with Kyle Busch’s No. 18 Toyota, though this time it was the left rear tire. As it turned out, the air gun was in reverse in this case as well, and the jack was dropped before the wheel was secured.

On Monday, NASCAR vice president of competition Scott Miller discussed both incidents during The Morning Drive on SiriusXM NASCAR Channel 90.

“It’s possible that we will [consider intent],” he said. “Certainly we will review everything that we have. From what we’ve seen so far, it wasn’t trying to go back on the race track with two lug nuts, it was obviously human error in both cases. There’s a lot of discussions internally that have to happen on how we’re going to rule on that.

“It’s fairly obvious when things keep occurring that are either competition or safety related, and you feel you need to ramp up consequences of doing said things. With wheels and hitting two to three lug nuts on the last pit stop, that’s where rules came from.”

Fast forward to penalty day on Wednesday, and the verdict came in. Hillman, along with tire changer Wesley McPherson and tire carrier Eric Pinkiert, have been suspended through July 9, which translates to the next four races.

Shortly after the announcement, BKR issued a statement.

NASCAR actually hit this penalty squarely on the head and followed its Rule Book to the letter.

This one is a clear case of black and white. Section 12.5.2.6.3.c specifically states “loss of wheel(s) due to improper installation will result in a mandatory minimum four Race suspension of the crew chief and tire changer and tire carrier of the lost wheel(s).

Honestly, it’s a tough call when you consider that neither incident was with the intention to gain a competitive advantage. Simply put, it was human error that resulted in the early jack drop that caused the wheel to come off. However, the rule that states a mandatory minimum penalty falls under the safety aspect of the rule book, and frankly, safety is something you just don’t mess with, regardless of intent.

While it seems like it’s unfair to punish the No. 29 team further after the damage sustained to a strong truck that could have been in contention for the win, it’s a case of NASCAR’s hand being forced by something that is far from a judgement call.

In a sport where many have complained about consistency in the sanctioning body’s calls, regardless of whether you think it’s “right” to further penalize the No. 29 team, the bottom line is that NASCAR made the right call on this one.

The good news for Briscoe, though, is the Truck Series is right back on track again this Friday night at Texas Motor Speedway. While the rookie has zero experience on the 1.5-mile oval, this week will be the first time the Truck Series sees the newly-repaved surface that put on a surprisingly competitive Cup race in April.

Briscoe is just one of 26 trucks currently entered as of press time. The series will hold three 55-minute practice sessions today, followed by qualifying ahead of the race on Friday.

“neither incident was with the intention to gain a competitive advantage” you say. I guess a 5 minute pit stop would be OK?
You are starting to sound like Scott Miller.

Ultimately, its the jackmen who are responsible for the miscue, yet they go unpunished. They should be named Hillary.