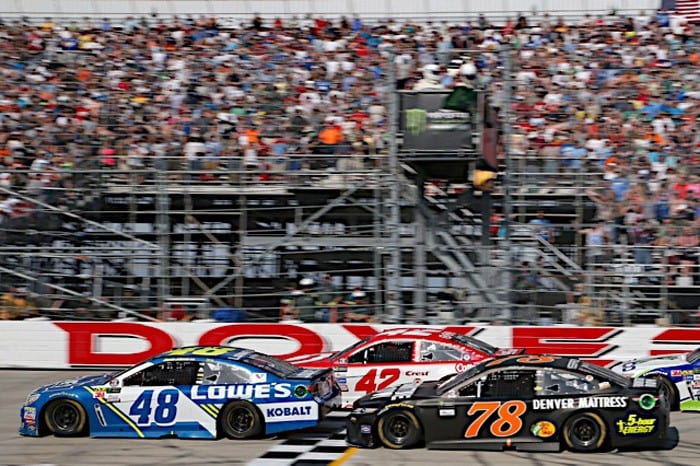 1. The teams of both Kyle Busch and Chase Briscoe received heavy penalties after Dover International Speedway, including suspensions of crew chiefs, tire carriers and tire changers after each had a wheel fall off in completion.  Did NASCAR make the right call?

Amy Henderson: Yes. The rulebook is pretty specific in this area, and NASCAR was correct in enforcing the rule as written.  You can talk about intent all you want, but it becomes a slippery slope, which will lead to the inconsistency fans don’t want to see. Does the rule go overboard? Yes, but that’s a separate question.  I do agree with a penalty and wouldn’t be against something like a fine and even maybe 10 points being docked, because leaving wheels loose is a safety issue for drivers and teams have shown they’ll cut corners in this area if allowed. But crew chiefs get fewer than four races for things that give a competitive advantage, so the penalty is out of proportion and needs to be rewritten.  But until that happens, they have to enforce the current rule regardless of circumstance.

Michael Massie: That is what it says in the rulebook, so it would have been wrong of NASCAR to not give out those penalties. That being said, that portion of the rulebook needs to change. I do not understand why NASCAR would make such a harsh penalty for a tire falling off in the first place. The car that has a tire fall off already severely suffers during the race by a loss of track position and an insane amount of damage done to the car while it is riding around the track on three tires. NASCAR should change this rule and lift these suspensions.

Bryan Gable: This was a no-win situation for everyone.  The rule was initially put in place to keep teams from purposefully leaving lug nuts loose.  However, the rule as written mandates the penalties that the Nos. 18 and 29 teams received were due to “improper installation” of wheels.  Even though these detached wheels were a matter of human error, it was still two cases of improper installation.  NASCAR made the correct ruling.  The penalties seem pretty harsh, but the competitors asked NASCAR to police lug nuts and loose wheels more forcefully.  The best thing to do going forward would be to revise this rule and its penalties during the offseason.

2. Another rule that came into question this week was the overtime line rule, when Dale Earnhardt Jr., one of the drivers who advocated for it, spoke in favor of changing it to only be in place at restrictor plate tracks.  Should NASCAR go back to the green-white-checkered?

Massie: The overtime line is the single rule in NASCAR that pisses me off the most, and I learned this week that if you hate this rule, that also means that you hate Jimmie Johnson. And I don’t. He did everything he needed to do to win the race at Dover and had such a great restart that he would have won regardless of the race staying green. The bottom line is that fans want to see the race finish under green flag conditions. They don’t care if it is called green-white-checkered or overtime or whatever, they just want a green-flag finish. In the past decade or so, NASCAR has tweaked and changed these rules but have failed to fix the fact that races can still end under caution. It does not take rocket scientists, a panel of experts or a million-dollar study to fix this problem, just make it so that races can’t end under caution. I want unlimited restarts until it ends under green. What are fans more likely to remember, a race that ends under caution or a race that goes four overtimes?

Gable:The overtime line has been a failure from the start.  Its implementation was a knee-jerk reaction by NASCAR, and it cannot prevent the type of accidents that we saw at Daytona International Speedway in July 2015.  Additionally, having the line placed on the backstretch of most tracks decreases the chance that fans will see a green-flag finish.  Going back to the green-white-checkered format would be an improvement, but what I really want to see are new rules that guarantee that every race has a green-flag finish.  If there’s a crash on the white-flag lap, simply freeze the field, have that lap not count and line them up again for another restart.  Do it as many times as you have to.  In this age of electronic scoring, NASCAR has the ability to ensure green-flag finishes, so why not make sure that the fans always get to see a battle right down to the checkered flag?

Henderson: I don’t have an issue with races ending under caution if there’s an incident on track that warrants one, including if it would be unsafe for drivers to come back around on the cool-down lap, still at a fairly high rate of speed.  The overtime line is an honest attempt to do that without having endless restarts and more crashes, because cautions do, in fact, breed more cautions.  The best solution would be one green-white-checkered attempt with no line, and if they can’t get through that, throw the yellow and end it with the field determined at the moment of caution.

3. Darrell Wallace Jr. was named as fill-in driver in the No. 43 until the injured Aric Almirola is ready to return to the seat.  What can we expect in terms of performance, and will this lead to a permanent ride for Wallace somewhere?

Gable: I think it is possible that Darrell Wallace Jr. could grab a top 10 or two, but any finishes in the front half of the field would still be good results.  Where Wallace’s career goes from here is anyone’s guess.  The unfortunate reality is that sponsorship, rather than anything he does over the next few weeks, will play a bigger role in whether or not Wallace continues to race in NASCAR.  Racing in the Cup Series, not to mention the No. 43 car, will give him a little extra exposure that could help him in his sponsorship hunt.  Wallace has proven that he should be driving in NASCAR at some level, but the chance to solidify his place in the sport might be now or never.

Henderson: If Wallace can grab a couple of top 20s in the six or eight weeks he’ll likely be in the car, he’ll be successful.  He’s a raw rookie in a Cup car, and the team is underfunded.  Almirola had some great runs with it, but he’s a veteran, and what Wallace needs to do is finish races and be as competitive as he can while learning the cars. That said, a couple of top 15s or better would certainly go a long way toward landing ride in a national series.  Wallace is absolutely talented enough to contend for wins in a stable, well-funded situation, and he’s got a great personality as well.  It’s surprising he hasn’t had more opportunity, because he’s good for the sport as a young talent who could be a contender for many years.

Massie: He will get some top 20s and maybe a few top 15s, but nothing spectacular. The thing Wallace needs to do is run all of the laps and bring the car home without a scratch. This is a do-or-die situation for Wallace, and he needs to perform or he will be out of the sport. In a perfect world, he will run well enough for Richard Petty Motorsports to expand back to two cars next year since it still technically owns two charters. That requires sponsorship, though, which is something Wallace lacks. The other possible destination for him, if Ford continues to push him, is in the No. 10 for Stewart-Haas Racing since Gene Haas is already constantly putting up his company’s money for his cars.

4. Last week we talked about the next first-time Cup winners, but how about the XFINITY and Truck series ranks?

Henderson: The two names that come to mind in XFINITY are William Byron, Cole Custer and Daniel Hemric.  All three youngsters are in good equipment and have shown plenty of ability in the Truck Series. As for that series, Ryan Truex is due, as is Ben Rhodes.  And it won’t be very long (though I’m guessing it will be 2018) before we see Todd Gilliland at the top of the pylon.

Massie: The facetious part of me wants to say that there will be no new XFINITY winners since the Cup guys are going to hog all of the wins for the rest of the years. Thankfully, there are a handful of non-companion events where the regulars will be allowed to win. Byron and Custer seem like likely candidates to get it done. In the Trucks, there will be a ton of new winners. Rhodes is overdue at this point. Noah Gragson, Truex and Chase Briscoe are all running extremely well and will likely win. And I still believe, even though he is part-time, it will not take long for Gilliland to make his way to Victory Lane.

Gable: Keep an eye on Byron and Hemric in the XFINITY Series.  Byron has not looked like the dominant force he was in the Truck Series last year, but I fully expect him to improve as the season goes on.  Hemric has done a nice job in qualifying this year and just needs a little more experience putting complete races together.  As for the Truck Series, look no further than Rhodes, who came agonizingly close to his first victory at Kansas Speedway.  Gragson is another possibility; KBM’s No. 18 truck has had an up-and-down season thus far, but we will see Gragson contend for more wins as he gets more familiar with his surroundings.

The tire rule should just be a one race suspension for the crew chief.

I never minded races ending under caution. Especially when the leader had a significant lead on second place and there are under 10 laps to go. If I remember correctly, this rule was the result of Kevin Harvick staying out on a restart at Talladega when his car was incapable of maintaining speed and taking out half the field for his own selfish benefit. They should have just suspended him for 2 races and left the rule the way it was.

I would love for NASCAR, going along with the throwback theme at Darlington, to run that race with 2003 rules (minus racing back to the caution). No Free Passes. No Wave Arounds. No Overtime Line. No Stages.
Restarts as they were back then. Lead Lap Cars on the Outside, Lapped Cars on the Inside. Single File with Under 10 to go, lead lap cars in front.