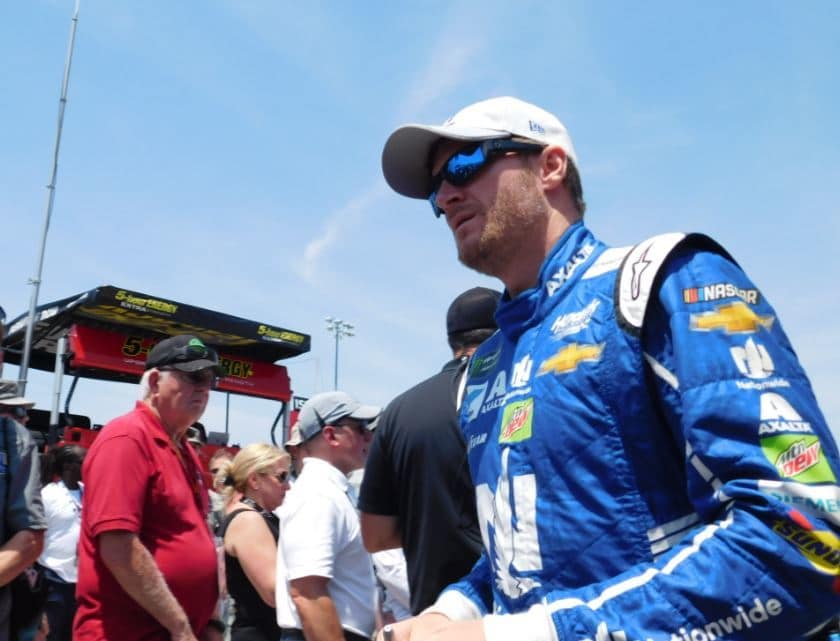 Summer in NASCAR is a time when teams can either thrive or slump under the sun, and those without wins begin to sweat a little when they look at the playoff scenario.  Teams see tracks for a second time and some find that something they need. Others coast a bit, seeing what works and making notes for the fall.

But the sun isn’t the only thing heating up this year.  Speculation is already swirling around the garage about 2018, and while nobody’s announced any big moves yet, it’s beginning to seem like just a matter of time until the first domino falls.

It’s almost Silly Season, and the 2017 version has the potential to be explosive.

NASCAR’s off-season is short, and unlike other major sports teams, who make the majority of their moves in that time, race teams are well underway in preparing for the next season by then, and most want to know who’s going to be in the driver’s seat next year well before those few crucial weeks.

With relatively few seats coming open either in cars or on the pit box, the first move in Silly Season often sets off a chain that lasts a few weeks.  The playoffs have pushed Silly Season back a few weeks from fall to summer, and this year’s version is looking like a powder keg.

With no deals done, there’s not much to go on other than speculation, but as the saying goes, where there’s smoke, there’s fire.

Last year’s version was relatively tame.  We already knew who was going to fill Tony Stewart’s seat, and the bigger teams didn’t make many lineup changes. Carl Edwards’ surprise retirement was big news, but it happened well into the off-season, and with the reigning XFINITY Series champion waiting in the wings, the aftermath was anticlimactic. Ty Dillon got his shot at the Monster Energy NASCAR Cup Series, Roush Fenway Racing and Richard Petty Motorsports downsized, but all in all, Silly Season wasn’t all that silly.

This year, though, several teams could see a shakeup.  Charters and who’s got them will play a role. Sponsors are making their decisions for next year, and that may bring changes as well.

One thing we know is coming is the naming of a driver to take over the No. 88 next year as Dale Earnhardt Jr. hangs up his helmet after this year.  It’s likely that the frontrunner is Hendrick Motorsports test driver Alex Bowman, who filled in for Earnhardt in several races last year with some outstanding results.  Hendrick XFINITY driver William Byron has been batted around in conversation as well, but it’s figured he’d get another year in NXS to gain experience before possibly taking over the No. 5 in 2019.

At least, it had been. But then came the announcement that Kasey Kahne’s two primary sponsors, Great Clips and Farmers Insurance, will leave the No. 5 team after this year, leading to speculation that Kahne won’t finish out his contract.  While Byron is still probably the top choice, there are a few veteran free agents who HMS might pursue as well. Kahne would also be looking for new digs.

Speaking of free agents, Matt Kenseth and Brad Keselowski are two drivers whose contracts could be reaching the end this year, and so far neither has made an announcement on the future.  It’s likely that Keselowski will stay at Team Penske, but Kenseth is more of a puzzle.  Paul Menard is the only Richard Childress driver without a win, and there’s always the possibility that Childress will make him the odd man out in favor of moving Dillon into the fold, but Menard brings full sponsorship, so he’s probably on solid ground.

There have been rumblings of Danica Patrick stepping aside after this season, while Stewart-Haas Racing has also not announced sponsorship for either her No. 10 or the No. 14 of Clint Bowyer for next season (or several races in this one).  The team has Cole Custer in the wings, but even if the No. 10 ride opens up, he’ll need backing.

Roush Fenway will have to decide whether to run its third car next year or sell the charter.  That was leased to JTG Daugherty Racing this year, but that can only be a one-year deal.  If RFR re-expands, Chris Buescher will likely fill the seat as he’s still under contract.  If RFR keeps its charter for Buescher, JTG Daugherty will either have to buy or lease a charter or run the second team as an open team if it continues as a two-car organization, and it’d need a driver.

Other charters that could be available are the one currently leased by the No. 72 of Cole Whitt and TriStar Motorsports.  It’s currently owned by Front Row Motorsports, which will have to expand or sell it.  The charter held by Wood Brothers Racing is owned by the No. 32 of Go FAS Racing, so it will have to either buy or find another lease next year.

Speaking of the No. 21, there’s also been talk of Penske expanding to three teams and taking Ryan Blaney into the fold.  If that comes together, that team would be looking to buy or lease a charter as well. The Wood Brothers would need a new driver if that’s the case.  The Ford camp has some in the wings, including Darrell Wallace Jr., who’s out of a ride once Aric Almirola returns to his seat.   And about that seat. RPM has said that its operation depends on sponsorship.That could mean that if there isn’t backing, the team could close its doors, making the No. 43 charter available along with their second charter (currently leased by the No. 32 team).

Confused yet?  The charter system makes what would have been a big Silly Season into a huge one.

What’s the bottom line?  Among the top teams, not one is 100 percent locked in for next year.  Hendrick Motorsports for sure will have one seat open. Two is a possibility. Joe Gibbs Racing could have one, if Kenseth hasn’t resigned, which would likely go to Erik Jones, which would then leave his seat at Furniture Row Racing vacant.  Stewart-Haas could have one.  RCR could make a minor change, or add a team for Dillon if sponsorship and a charter materialize. Penske is looking to expand, and that seems more like a matter of whether it’ll be next year.

Roush has to make a decision about its third charter.  Chip Ganassi Racing hasn’t announced anything, but Kyle Larson’s name has also been batted around for one of the Hendrick rides. Add in the mid-tier and small teams, and the landscape could look a good bit different next year.

At this point, this is all potential energy.  Nothing has moved, no spark has been ignited. It’s possible that things will simmer down and few moves will be made.  Social media certainly feeds the speculation and can make mountains out of molehills in a matter of hours.

That doesn’t mean it’s not worth keeping an ear out for, because today’s garage scuttlebutt is very often news in a few weeks.  It’s just important to note that more talk doesn’t necessarily mean more action.  This year has an undercurrent of talk already, though, which makes it feel like there could be a lot to keep up with once Silly Season begins.

You left one guy out. I have a feeling Carl Edwards will land somewhere. He isn’t retired. If he was he still wouldn’t be working for Toyota and JGR. Also when the 43 came open, Carl said he was unable to fill in, meaning Toyota wouldn’t let him. Carl will be back in a ride next year with Dave Rogers as his crew chief.

Think the issue of these teams with charters and a declining number of sponsors will be the story of the off season.
Or, at what point does this become like any other work place? That its smarter to unload the high paid veteran driver and bring in a younger guy for way less money.

A couple of things: 1) It is starting to appear that NASCAR settling on 36 charters might have been 6 too many. 2) There are very few sponsors that can afford the $15M to $20M sponsorships needed to fund a major team, looking to come in the sport anymore.

The whole thing could implode this year. I read rumors the 5 could be shut down and also the 10 if sponsors aren’t found. That would make these charters worth 0. It might be a good thing in the long run for the sport. The sponsorship isn’t there anymore to sustain $30+ million per car budgets, and a lot of that cost appears to be the fleets of engineers that work on these cars now. That’s on the team owners. No NASCAR rule forces billionaire owners to fork over their own cash to hire people out of MIT for six-figures a year. It’s their own competitive spirit. I hate to see people lose their jobs, but maybe the sheer force of the market will force the owners to right size their operations for the sponsorship environment.

well said. Remember that as long as they can find the people with the money escalating costs plays into some peoples hands. Thins out the competitors who can keep up.