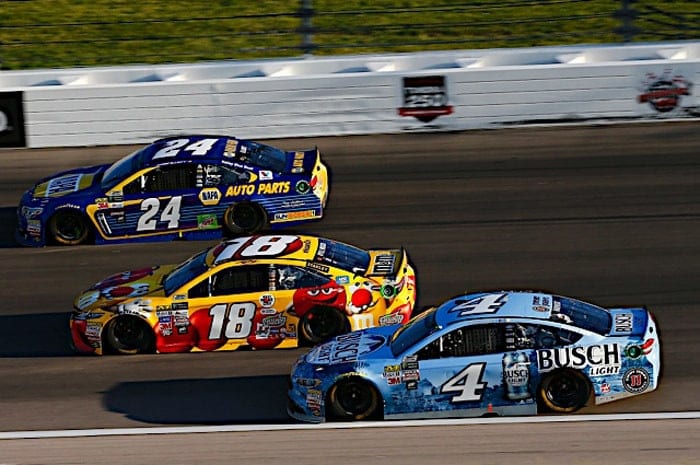 Does the chase for the 2017 Monster Energy NASCAR Cup Series championship seem… a little wide open to you right now?

Let’s look at the facts: the Cup Series is 13 races into its 2017 season. Martin Truex Jr. leads the standings by nine over Kyle Larson. Truex has two wins to his credit in 2017, while Larson has one.

Truex also has five top fives and nine top 10s to, matched in the latter category only by Brad Keselowski.

Not that the latter stat is particularly crazy. Though by race 13 last year the series had eight different winners, years prior were a different story. You had nine at this point in 2015, 10 in 2014, nine in 2012. We’re not talking anything revolutionary here.

Top 10s? A little different. Truex and Keselowski leading the series with nine top-10 finishes through 13 races, marking 2017 the first time in four years that no driver in the series has broken into double digits in top 10s through this point in the season.

In 2016, both Kurt Busch and Kevin Harvick had already accomplished the feat before the 14th race. In fact, Busch already had 11 top 10s by this point last year.

The year before, Harvick and Truex were tearing up the series with 12 each, while in 2014, then-points leader Matt Kenseth had accrued 10.

Now, take a look at 2013. As a refresher, that’s the year in which Jimmie Johnson emerged with his sixth series championship, winning six races in the process. Kenseth won more, ending up in victory lane seven times before his eventual second-place standings finish.

After the 13th race of 2013 (which was also held at Dover), Johnson sat atop the standings. But he only had two race wins to his credit by then, along with six top fives and eight top 10s. That top 10 stat was matched by two others — Dale Earnhardt Jr. and Keselowski — but exceeded by no one.

Meanwhile, by that point, 33 different drivers — yeah, 33 — had scored at least one top-10 finish. That’s a hefty bump over this year’s roster, which has 29, though bear in mind that 2013 still included 43 drivers a race and did not have the 36-team charter system in place. To compare, 2016, the first season with a charter system, had 27 different top-10 finishers by now.

What one can take from this is that it’s another illustration of what a crapshoot this season has really been. We’re not sitting here each and every week talking about the same handful of drivers and teams pacing the field, as with certain seasons. There isn’t a crystal clear frontrunner or two who seems unstoppable a third of the way through the season, like Harvick and Truex were in 2015.

Instead, yeah, we can talk about Truex and Larson as the leaders, but only in the sense that they’re leading the point standings heading into this weekend’s event at Pocono Raceway. Both are ahead of their peers, but they don’t seem head-and-shoulders above. Nor does Johnson, despite his three wins in 2017; thank three finishes below 20th place for that.

That’s helped by surprise winners, too. Ricky Stenhouse Jr. and Austin Dillon are first-time winners this season, and people apparently consider Ryan Newman a bit of a surprise in victory lane, too (I’m not as sold, but eh, to each their own). Shoot, that first-timers club could grow by the end of the season with the way Ryan Blaney and Chase Elliott have been running, along with rookies Erik Jones and Daniel Suarez.

Chances are someone will break into the 10 top 10s category this weekend. Truex and Keselowski, after all, have strong past results at Pocono in their own right, each with a win to their credit along with multiple top fives and top 10s. Really, it’d be more surprising if at least one of them didn’t end up near the front when the checkered flag flies.

But even after then, we’ll still be talking about this incarnation of the Cup Series: the year no one could really get ahead of his or her peers.