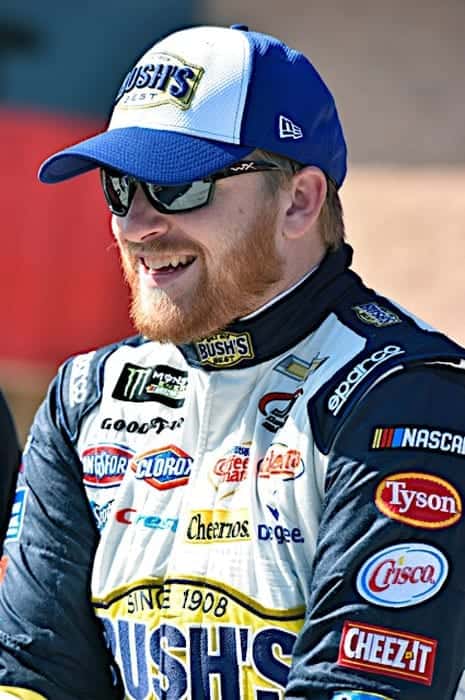 As the next generation of young, talented drivers have cycled into the sport, others have been replaced. In recent years, there has been a crop of young phenomenons that have taken the Cup Series by storm.

Kyle Larson, Chase Elliott, Austin Dillon and Ryan Blaney to name a few. But one name that is often forgot about is Chris Buescher, who got his first-career win before all of those drivers, also coming in his rookie season at Pocono Raceway last year.

Sure, Buscher’s triumph came due to  rain and fog, but the victory secured him a spot into the playoffs, joining Elliott as the only rookie to have a shot at the championship, and the first rookie since Denny Hamlin to have that opportunity, which came in 2006.

Buescher, 24, is aware that the other young talent of the sport is often talked about more than the Texas native.

“To a certain extent, maybe,” Buesher said on if he is overlooked. “I’m the same age as a handful of them. Me and Ty (Dillon) ran ARCA when we were the same age; Austin being a little bit older. And then we’ve had the movement of these other kids, way younger, coming in and participating. And so, I’m part of it. And it’s nice to be there. And it’s going to remain very challenging as the years go on.

“And I’m not getting any younger and it seems like the younger kids keep showing up and I think you look at the feeder series with ARCA and the Truck Series and K&N and XFINITY, you look at how well some of these kids are doing at the young ages they are, it’s only a matter of time before they find themselves in a competitive Cup ride and are able to be part of that same talk. At some point, it’s going to become the normal. It won’t be a movement, it will just be the field.”

Through 13 races, Buescher sits 26th in the championship standings in his first season with JTG Daugherty Racing. Currently, he is 142 markers behind Matt Kenseth, who has nailed down the final playoff position. However, he is 18 points ahead of veteran teammate AJ Allmendinger.

In a podcast earlier this week. Dale Earnhardt Jr., NASCAR’s Most Popular Driver named Buescher as one of the drivers fans should cheer on following his retirement at the end of the season.

“If you want to pick a guy that I think is just as talented as these guys but you want to work your way up with him — Chris Buescher,” Earnhardt said during the podcast. “I think that Chris did an amazing job in the XFINITY Series — outran our cars with the Roush stuff, which nothing against the Roush cars, but I thought he did an amazing job. I think he really does a good job in the car he’s in now, it’s a brand new team, it’s not one of the more higher-funded operations and I think he gets quite a bit out of that race car … what I’m trying to do here is set you up with a guy that I think’s going to make it and you can go on that ride with him.”

Buescher was thankful to hear that Earnhardt had high praise for the 2015 XFINITY Series champion.

“When he talks, our fans listen,” Buescher said of Earnhardt. “That’s pretty awesome to be talked about in that manner. I think it says like a ‘dark horse’, right? And so that kind of sums it all up, right? It’s not quite the most obvious, but it is an opportunity for us to be able to go out there and make a name and gain a fan following through the years as hopefully a really long tenure in the Monster Energy NASCAR Cup Series. We’ve going to keep working on that and get to the point where hopefully we get talked about as more mainstream in the fan vote going forward.”

It might take another Hail Mary victory to lock the second-year driver into the playoffs in as many years, but Buescher has proven himself to some of the top guys in NASCAR.