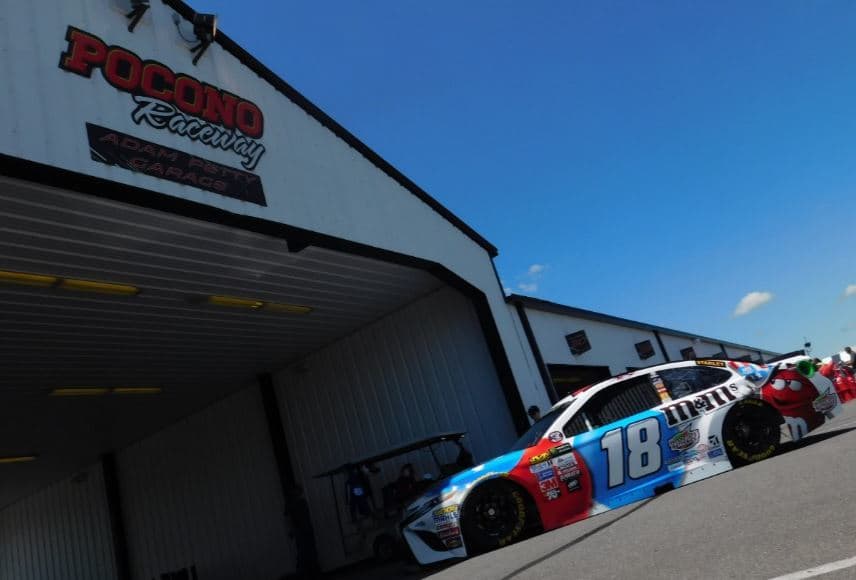 For the second consecutive week, car No. 18 will lead the Monster Energy NASCAR Cup Series field to the green flag on Sunday afternoon.

Kyle Busch took over Pocono Raceway, clocking in a time of 50.237 seconds, giving the Joe Gibbs Racing driver his 21st career pole in NASCAR’s premier division. Busch outran reigning Pocono 400 winner Martin Truex Jr., who was .171 seconds behind his Toyota counterpart in the final round of knockout qualifying.

“We wanted to take advantage of some clouds when they were present,” Busch said in a press conference. “I didn’t expect to post that big of a lap time, but it did.”

Busch is racing without crew chief Adam Stevens, who was suspended for four races after a tire fell off the No. 18 car at Dover International Speedway. Filling in for Stevens is Ben Beshore, a race engineer for Joe Gibbs Racing, who is a Pennsylvania native and will make his debut atop the pit box come Sunday’s race.

“I think it shows the way Adam Stevens prepares his team, his cars and the work he puts in at the shop with all of the guys,” Busch said. “It’s the way that this whole team is lined up. To come out here and qualify first gives us good pit selection for Sunday and the track position to start.

“As we saw last week, we definitely missed the Eight Ball on that one. We messed up early and screwed it up early in the race. We got ourselves down and out almost. We were able to rebound and finish OK. It was just a bad weekend for us and we want to change that here this weekend.”

After practicing inside the top 20, Darrell Wallace Jr. will start 16th as he makes his Cup Series debut.

“We need to just get through practice tomorrow,” Wallace said on pit road after his qualifying run. “We need to change our balance and get our Smithfield Ford better. Sunday is just about running a clean race and not making anybody mad. I’m going to try to gain respect and earn respect.”

Dale Earnhardt Jr., who experienced engine issues on Friday during practice, will start 28th for Sunday’s race. He made one lap during Friday’s qualifying session as the

Click here for the starting lineup for the Pocono 400 at Pocono Raceway.

The top three are Toys. Brian is celebrating somewhere close to his bank. I guess Kyle didn’t toss the mic this time.

LOL, anybody who doesn’t see the favoritism of the TOYS cars is nuts. Brian at considerable expense to other teams a few years ago lowered the HP because the little TOYS were going BOOM all the time and could not keep up with the big boys! If that isn’t obvious, I don’t know what is!