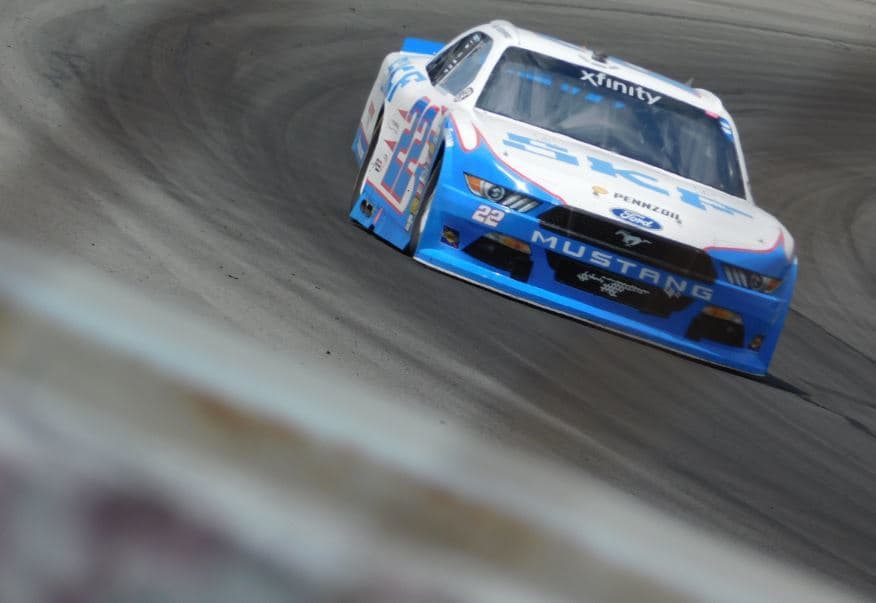 Brad Keselowski was hard-charging in the final 16 laps of Saturday’s Pocono Green 250 at Pocono Raceway.

After receiving the bump-and-run by Elliott Sadler on the race’s final restart, Keselowski fell back to 12th before charging back up to second with two laps to go.

Then, after Kyle Larson ran a little wide in Turn 1 on the final lap, Keselowski dipped low and completed the pass. It was the first XFINITY Series win of 2017 for Keselowski and the 35th of his career.

“On the restart, I got a good push, but the push didn’t stop,” Keseowski said of the Sadler contact. “All of a sudden I found myself in the third lane in Turn 1, which is not a good place. That sent us to the back and I thought there was no way we could pass all these cars in 15 laps.”

The victory also snaps a winless streak for the No. 22 Team Penske XFINITY program, which hasn’t won since Texas in the fall of 2015.

“I got the [Nos.] 7 and 42 about a half-dozen of laps. I was just clawing to get by them. The 7 got loose and that got me to the 42. He was doing a good job of holding a line to get the air off my car. I tried getting him loose and it worked off Turn 1. I just inched in front of him at the right time.

“Heck of a battle, heck of a finish. I don’t think it gets any better than that.”

After Larson ran wide in Turn 1, Justin Allgaier sneaked into second, good enough to put him into the point lead for the first time of 2017 after 12 races.

“We’ve had a steep battle in front of us,” Allgaier said of 2017. “We have to do the things we’ve done every week to gain these points. The end of the regular-season bonus is huge.”

Larson came out of nowhere to grab the race lead on the final restart. Leading 15 laps, the No. 42 pushed just a little too hard when it counted.

“Brad was about a half-second a lap faster at the end,” Larson said. “I figured he would get back up to us.”

Though Keselowski eventually bounced back to win, the contact between Keselowski and Sadler grabbed the attention of many as they raced through Turn 1. Sadler confirmed the contact was not intentional.

Most of the 100-lap event saw Keselowski out front and orderly racing behind. With only one caution for on-track incident (Brandon Jones on Lap 80), pit strategy turned out the be the day’s biggest factor.

Allgaier grabbed the race lead when he, Brendan Gaughan and a group of others stayed out to stretch fuel. Cole Custer also led his first laps of 2017, 14, en route to a seventh-place finish.

Starting from pole, Kyle Benjamin led the opening 21 laps in his No. 20 Joe Gibbs Racing Toyota. Leading an additional seven, Benjamin fell to 16th after contact with Keselowski in the final laps. The second-time series racer finished 16th.

“I learned a lot. A lot of aero-balance stuff,” Benjamin said after battling for the lead with Keselowski throughout the first stage. “Getting behind Brad, it was really cool. A lot of fun to compete with him. We had a great car, we just got some damage on the last restart and couldn’t compete.”

.@Elliott_Sadler with the bump and run! He takes over the lead with 16 to go. pic.twitter.com/nK4pm69lrk

Battle back: ✔️
Last-lap pass for the win: ✔️

Time to burn it down! pic.twitter.com/ICXmV1HgQl