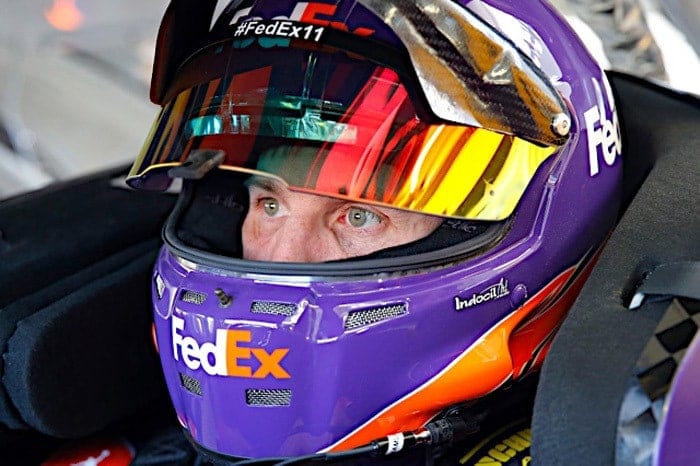 Thirteen races have come and gone in the 2017 Monster Energy NASCAR Cup Series and Joe Gibbs Racing has yet to lock one of its four drivers into the playoffs with a victory. Searching for speed is something that the team struggled with early into the season.

At this point last season, all four drivers were locked into the playoffs, picking up a series-high seven victories in the first 13 events. Overall, JGR was triumphant 11 times in the regular season, with Carl Edwards picking up the organization’s only victory in the final 10 races, advancing the No. 19 team to the Championship 4.

With the lower aerodynamic package with other racing variables, statistically it has hurt JGR. Between its four drivers, the team has picked up 10 top-five finishes, Kyle Busch scoring half of those results, with a pair of second-place finishes at Martinsville Speedway and Charlotte Motor Speedway. Matt Kenseth has picked up three top 5s, and is sitting on the playoff bubble. Daniel Suarez has four top-10 finishes, coming off a career-best sixth at Dover International Speedway last weekend.

Denny Hamlin, last year’s Daytona 500 champion has a best finish of third at Richmond International Raceway, coming in late April. The No. 11 team has led 150 circuits, 59 of them coming at his home race track in central Virginia.

“It’s not really been up and down, it’s been a little down with steady inclines up,” Hamlin told Frontstretch at Pocono Raceway, a track in which he has gone to Victory Lane four times, including sweeping both events in his rookie season. “We’ve been getting better every single week. I think we’re going to put ourselves in a position to win, hopefully in the next couple of weeks and get our playoff spot.”

Hamlin has six top-10 finishes through 13 races, the same amount he had at this time last season. Overall, the No. 11 team sits two spots higher in the championship standings, as they are currently ranked ninth.

However, with the new stage racing that was introduced to the sport at Daytona, Hamlin has 68 total stage points, 10th highest in the Cup Series. He has won a pair of stages, coming at Talladega Superspeedway, in which he was out front for 43 laps, and most recently winning Stage 3 of the Coca-Cola 600.

“It gives me confidence that we are still in a good points position, though we aren’t one of the fastest six or seven cars,” Hamlin said. “Once we get to the point where we are one of the fastest cars, then, we’re hopefully going to capitalize and get some bonus points for the playoffs. That’s really what the regular season is about—making sure you’re in a good spot seeding wise going into the playoffs because those points carry over.”

For Hamlin, he’s not all too surprised that he has gotten off to a bit of a sluggish start.

“For whatever reason throughout my career, it’s always taken a little bit more time to get in a rhythm and get the performance up,” he said. “It’s usually in the early summer months where we begin to perform well. I don’t know if it’s the race tracks or if its me that takes a while to get through the aerodynamic changes that the cars have during the off-season. Usually by playoff time, we are contending for wins and that is what counts.”

Of Hamlin’s 29 career Cup Series checkered flags, 16 of them have come between June and September. In the next month, he was victories at Pocono, Michigan International Speedway and Daytona. Last season, he finished second after being bumped out of the way by Tony Stewart on the final corner of the last lap.

But with JGR not going experiencing the thrill of victory thus far in 2017, it’s only a matter of time before one of the four drivers finds themselves in the playoffs.

“I’m surprised, but it’s coming pretty soon I believe,” he said. “We’re starting to get quite a bit better all around on all types of different race tracks. I would say it’s not too far around the corner and once we win one we could very well win the next three.”

Out of the four drivers on the team, three of them are experiencing winless streaks of at least 22 races, which Hamlin last won at the cutoff race to the playoffs last season. Busch’s last triumph came at the Brickyard 400, when he dominated, leading 149 of 170 laps. Kenseth last went to Victory Lane at New Hampshire Motor Speedway, 31 races ago.

It’s become motivating for Hamlin to put Coach Joe Gibbs back to the Winner’s Circle, but it isn’t the end all-be all, if he’s not the first one back.

“I don’t put any more [pressure] on myself than what any of the drivers do,” Hamlin said. “We all want to be the first one to get to Victory Lane, but it can only be one of us. I feel like at any given track, one of our cars can win.”