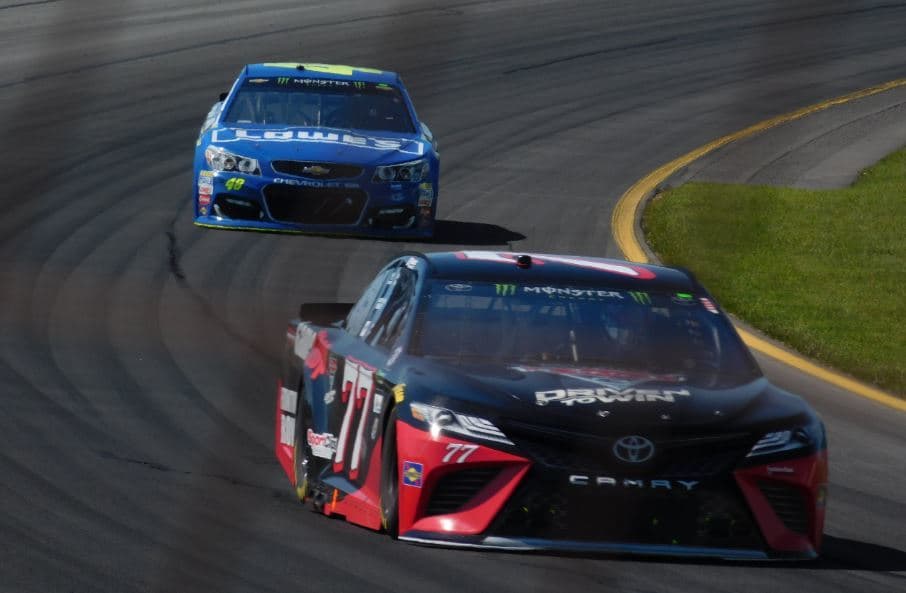 His No. 77 Toyota drove to the front of the field during Sunday’s Axalta Pocono 400, setting the pace for 20 of the 160 laps en route to a third-place result, the best of his 17 starts in NASCAR’s premier division.

“It was neat to see my number up top on the pylon,” Jones said. “Hopefully, this is a sign of things to come and it’s a turning point for us. Our luck is turning around and we’ve gotten some good finishes here over the next few races and close out these races better.”

Jones took advantage of pit strategy early in the race, bringing his racecar to the front of the field for the first time during green flag competition in his young career.

Thanks to stage racing, Jones’ crew chief Chris Gayle opted to keep him out until Lap 34, when he finally came into pit road for four fresh tires and gasoline.

I have to ask myself, when thinking of 77 hashtags early in the season, was #Mu77et on my radar? I think not!

Though the move took the No. 77 team out of contention for points in Stage 1, they positioned themselves at the top of the chart come Stage 2. Jones stayed out in between stages, retaking the lead and holding off Kyle Busch for three laps before the No. 18 car, which led a race-high 100 laps, took over on Lap 60.

“It’s just more gratifying when you stick with it and keep doing the same things week-in and week-out,” Jones said. “Sometimes, you hope it’s going to come back around. It’s nice to get the finish we deserve.

“I’m just happy that we finally get the finish that we deserve. We ran up in the top five most of the day, had a good pit strategy to it and it all worked out. The last restart played well into our hands. We got it into third and knew we had to hold those guys off. It’s pretty exciting and I’m happy we had a fast racecar. ”

Now that Jones, the 2015 Camping World Truck Series champion, has proved to himself that he can finish in the top five, he believes the confidence is there to keep the momentum going.

Said Blaney, “It’s just nice to know we can race up there and be in contention for the win.”