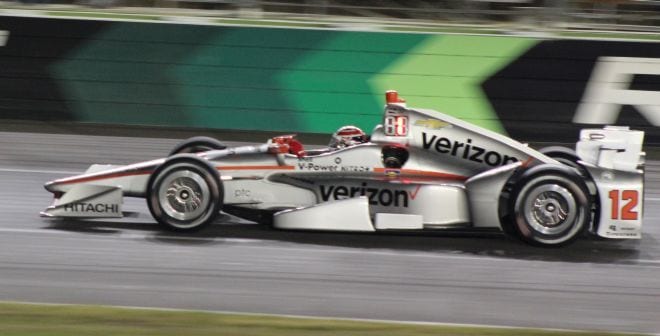 In a boom-or-bust year for Will Power, Texas Motor Speedway offered a boom. He was able to power through a wild, wreck-filled IndyCar race to score his second victory of the season and assert himself in the championship race.

“I’m so stoked to win in my second home, where my wife (Liz) is from, Texas,” Power said in Victory Lane. “All the family is here. It just feels awesome.”

The racing at TMS offered a pack-style, Talladega-ish mentality that saw almost all drivers clung together in a large draft for a majority of the event. But for most of it, Power was able to stay out front. His strongest challenge came in the closing stages as he engaged in an intense side-by-side battle with Scott Dixon for several laps.

But Power held his ground, earning the first-place trophy.

“Shows you how good that Chevy engine is, man, it was super fast tonight,” he said. “It was very intense. I could see (Scott) Dixon was able to pass me at the start/finish line. So I was starting to think about what I was going to do there at the end.”

Dixon never got the chance to make that final move. A late charge by Indy 500 winner Takuma Sato, trying to pop to the inside of Dixon went from exciting to erroneous in a heartbeat. Getting one of his wheels stuck in the grass, Sato lost control and contact ensued which took both men out along with Max Chilton.

The wreck plus the victory by Power closed the gap between the rivals to 40 points in the championship standings. Power sits fifth while Dixon holds a 13-point lead over Team Penske driver Simon Pagenaud.

The contact moved Tony Kanaan up to a second-place finish, an unlikely ending for him in a race that could not get back under green-flag conditions. It was a solid run that came at a cost for the driver of the No. 10. He was penalized with a 20-second stop and hold for avoidable contact and blocking with just under 100 laps remaining. Kanaan’s moves were blamed for two accidents, one involving Alexander Rossi and a second which took out a half-dozen cars.

The race was slowed by nine cautions and a red flag period that lasted just over 30 minutes. Just eight cars completed the race, six of which finished on the lead lap. Tire conditions were blamed along with chassis and new pavement that made it nearly impossible for the cars to separate from each other at TMS.

The first and second cautions saw the single cars of Rossi and Helio Castroneves knocked out of the race. The third yellow came for Ed Carpenter, who clipped the grass and spun down the frontstretch but saved the car from any damage.

But the fifth yellow, the one that left several competitors angry at Kanaan was the most seriuous of all. Several cars were involved in a turn 4 melee that resulted in the field being brought down pit road for a red flag period to clean up the mess.

James Hinchcliffe, along with car owner Dale Coyne were critical of Kanaan, claiming his aggressive driving caused three-wide racing and eventual contact that wiped out a third of the field.

Kanaan’s car owner, Chip Ganassi, stuck up for his driver by claiming Hinchcliffe was trying to “wreck all night.” But the Canadian would have none of it, snapping back at Ganassi in response.

“That’s adorable,” he said. “Tony turned right into a left-hand corner, so that’s a shame. And he got away with it. He doesn’t normally race like that… I don’t know what happened.”

When the yellow came back out after 30 minutes, 42 seconds under the red flag, INDYCAR told teams they would be required to change tires after 30 green-flag laps for the remainder of the race.

Once the green flag flew again, another four yellows slowed the field before the final caution flew for the Dixon-Sato-Chilton wreck with just six laps remaining.

Polesitter Charlie Kimball completed just 41 laps before an oil leak sidelined him and sent the No. 83 machine to the garage. He was the only one of the retirees to suffer mechanical-related issues. Conor Daly finished seventh, one lap down, while JR Hildebrand ended the race in 12th, 33 laps behind the leaders.

The IndyCar Series now heads to Road America in two weeks for the KOHLER Grand Prix.

Another Texas Death Match. Thank God no one was hurt bad.
If you are a media darling, you get a pass. If you are young, brave and talented you get the blame.