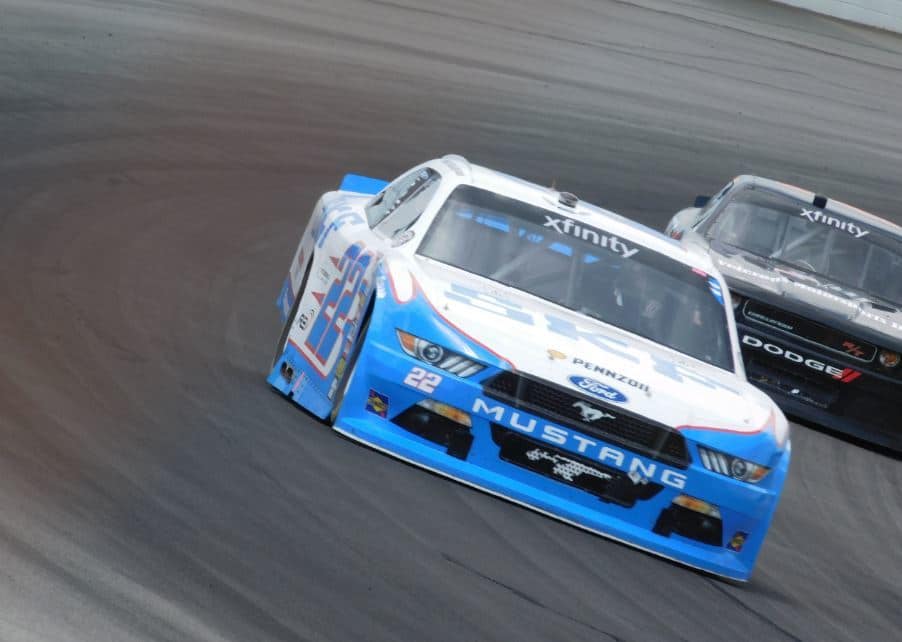 Monster Energy NASCAR Cup Series: Pocono, 2017 Deliver Another First-Time Winner – What a popular streak for both the sport and a racetrack to be on in 2017.

After Chris Buescher’s fog-shortened victory at Pocono Raceway last August, many thought a win like that would never come again. In part, they were wrong, as Ryan Blaney scored a second straight first-time winner at Pocono, passing Kyle Busch with fresher tires.

Though Wood Brothers Racing is quite even with Team Penske and other top teams, it is still the same team that first raced Monster Energy NASCAR Cup Series in 1953 with Glen Wood behind the wheel. It’s the same number, the same scheme and had the same exciting fan base screaming when it took the lead.

The driver, however, was much different. It was almost a deja vu to only two weeks ago when Austin Dillon grabbed his first win in the famed No. 3. That win was also aided by strategy that put his Chevrolet to the point.

XFINITY Series: Cup Dominance Takes Over Pocono – Even when it looked like an XFINITY Series regular could win another race, a Cup Series regular stole it — as per usual. XFINITY Series championship leader Justin Allgaier came on strong late in the going during the Pocono Green 250. But Brad Keselowski decided to rain on his parade, taking advantage of an over-driving Kyle Larson to earn his first win in the division since November 2015.

The victory marks another sad day for the XFINITY Series, taking away from a moment that a talented driver should have had in the spotlight. Instead, a proven champion gets a little extra publicity because he won in NASCAR’s form of Triple-A.  – Joseph Wolkin

Camping World Truck Series: Chase Briscoe Inches Closer to First Career Win – When Timothy Peters and Austin Wayne Self got together at the end of the Winstaronlinegaming.com 400 at Texas Motor Speedway Friday night, the leaders had just crossed the start / finish line, taking the white flag. For Chase Briscoe, who was just barely behind winner Christopher Bell at the time the caution flag flew, it meant dashed hopes for snagging his first career win.

In the final 10-15 laps, Briscoe and Bell had engaged in a very tight battle that would have been contested to the very end, had the race gone green. Instead, the field rolled around the track one last time at pace car speeds, Bell was credited with his second victory of the season and Briscoe saw his first career win slip right through his fingers.

“I think that was as close as we could have gotten to winning and not be standing in Victory Lane,” Briscoe said. “I honestly didn’t know if we had the win or not when the yellow came out, it was that close. It was really fun racing with Christopher Bell. He’s one of my best friends, so it was fun to put on a show with him. Not getting the win tonight is disappointing, but we can’t be disappointed in how our Cooper Standard Ford F-150 ran tonight.

“Now we just need to be so far ahead at the end of the next race that there’s no questioning whether we are the winner.”

And that’s exactly the direction the No. 29 team is headed. In the first of a four-race suspension for crew chief Mike Hillman Jr., Briscoe led seven laps and nearly took the victory. Next weekend, the series heads to Gateway Motorsports Park, which is where Bell scored his only win during his rookie campaign last year. – Beth Lunkenheimer

IndyCar Series: Will Power Cuts in Scott Dixon’s Point Lead –  Saturday night’s IndyCar Series race at Texas Motor Speedway saw just eight of the 22 drivers that started the race run to the end, thanks to a plethora of cautions and quite a bit of carnage along the way. When the checkered flag flew, it was Will Power, who led a race-high 180 laps, that emerged victorious.

After starting the season with three straight finishes outside the top 10, the 2014 series champion found himself in quite the hole in the championship standings. A pair of top-two finishes, including a win, allowed Power to climb the standings a little before a crash in the Indy 500 and an 18th in the first of two races in Detroit dropped him once again.

The win at Texas, combined with Dixon’s late-race DNF allowed Power to gain 30 points on the leader, though he still sits fifth in the standings, 40 markers out of first. The series heads to Road America, where Power visited Victory Lane after leading 46 of 50 laps last season, in two weeks for its next event. – Beth Lunkenheimer

Sports Cars: The Biggest Week of the Year is Here – This upcoming weekend is the 24 Hours of Le Mans, the most important sports car race of the year.  60 teams will take on the 8.469-mile Circuit de la Sarthe in what will likely be a very competitive race.

IMSA teams are well-represented in the race. Five GT Le Mans teams will compete in the GTE-Pro class.  Corvette Racing is back for another assault with their regular drivers from the IMSA WeatherTech SportsCar Championship.  Antonio Garcia and Jan Magnussen will share the No. 63 with Jordan Taylor.  Meanwhile, the full-time endurance lineup of Marcel Fässler, Oliver Gavin and Tommy Milner will share the No. 64.  The IMSA Ford GTs are back as well.  Joey Hand and Dirk Müller are in the No. 68 with Tony Kanaan replacing the injured Sébastien Bourdais, while Ryan Briscoe, Scott Dixon and Richard Westbrook are the No. 69.  Risi Competizione’s Ferrari is present as well.  Regulars Giancarlo Fisichella and Toni Vilander will be joined by Pierre Kaffer.

Outside of GTE-Pro, Keating Motorsports is fielding the lone Riley Mk. 30-Gibson in the LMP2 class.  GT Daytona teammates Jeroen Bleekemolen and Ben Keating will share the car with Ricky Taylor.

GTE-Am has a number of IMSA-infused lineups.  Scuderia Corsa earned two automatic entries by virtue of winning the GT Daytona championship and winning the GTE-Am class at Le Mans.  The No. 62 Ferrari will feature defending class winners Townsend Bell and Bill Sweedler, along with Cooper MacNeil in a WeatherTech-sponsored entry.

The second Scuderia Corsa entry features Alessandro Balzan and Christina Nielsen in the No. 65 Ferrari.  They will be joined by Turner Motorsport regular Bret Curtis.  Curtis was going to race a Porsche at Le Mans a couple of years ago, but got hurt in a practice crash, forcing Bleekemolen and MacNeil to move up to GTE-Pro and race as a duo.

Public scrutineering will be held on Monday and Tuesday in Le Mans.  On-track activities begin on Wednesday morning.  The race itself will start at 9 a.m. EDT Saturday and air on FOX Sports 1, FOX Sports 2 and FOX Sports GO. – Phil Allaway

NHRA: Greetings From Englishtown, New Jersey – NHRA made its second stop on the northeastern tour this weekend for the NHRA Summernationals from Englishtown, New Jersey. Jersey native Top Fuel driver Antron Brown was hoping to come away with the hometown win but was denied by Steve Torrence. Fellow local boy, New Yorker Vincent Nobile, also had high hopes but Greg Anderson nipped him for the Pro Stock win.

Torrence and team have been making some noise lately, going to four finals and winning two so far this season. Make that five finals and three wins, with Torrence’s 3.857 second, 320.28 mph run good enough on a hot and slick race track to beat Brown’s 3.932 second, 306.74 mph pass.

In Funny Car, Fast Jack Beckman had to take on teammate Ron Capps in the finals. Give it to Fast Jack with a 4.100, 312.42 mph run to beat Capps who ran 4.143 seconds at 299.66 mph. Might not look very fast considering the 3.80-second run put down by fellow DSR driver Matt Hagan last month, but in the New Jersey heat, sometimes you have to slow down to go fast, or go at all on a slick race track.

Beckman is also working with essentially a whole different team this season after some big changes, especially the departure of his crew chief from last year, Jimmy Prock.

“It was an odd race weekend. It was a very, very hot racetrack. It became a crapshoot in a lot of races down there in a pedal fest,” said Beckman. “We dodged a huge bullet when Courtney red lit against us in the semis, but we’re the ones holding the trophy. When I go down there and stand next to that Infinite Hero Charger with our seven crew guys and three crew chiefs, they’re going to realize they were the best today. And we needed to get that one so they know we can do this.

“The first one is always the toughest one,” Beckman continued. “It’s 25 Funny car wins for me, plus two more in Super Comp, but it’s one for this iteration of the Infinite Hero team.”

Pro Stock Motorcycle returned to action in Englishtown and it was reigning champion Jerry Savoie taking the win with a run of 6.918 seconds at 192.85 mph to best Hector Arana, Jr.’s 6.862 seconds at 195.62 on a holeshot.

Formula 1: Lewis Hamilton Cruises in Canada – There must be something about the Circuit Gilles Villeneuve and Lewis Hamilton because the Mercedes driver won for the sixth time at the track on Sunday, capping a weekend where he made a statement of returning to form.  Hamilton also won the pole for the race, tying Ayrton Senna for second all time with 65 and was presented with a Senna had previously worn.

Ferrari attempted to play a different pit-stop strategy by using a two-stop strategy but the time lost doing so, and first lap wing damage to Vettel comprised these efforts, putting both drivers off the podium and allowing Hamilton to close the driver’s title standing.  Mercedes taking the top two spots also allowed the Silver Arrows to earn valuable constructor’s points, holding down first overall.

While Hamilton may have cruised, the battle between the Force India duo of Sergio Perez and Esteban Ocon showed itself to be one of the highlights as the teammates battled for the final 30 laps.  That Vettel joined the fray just made the racing that much more interesting and surely will lead to some team discussions for FI.  Huston Ladner