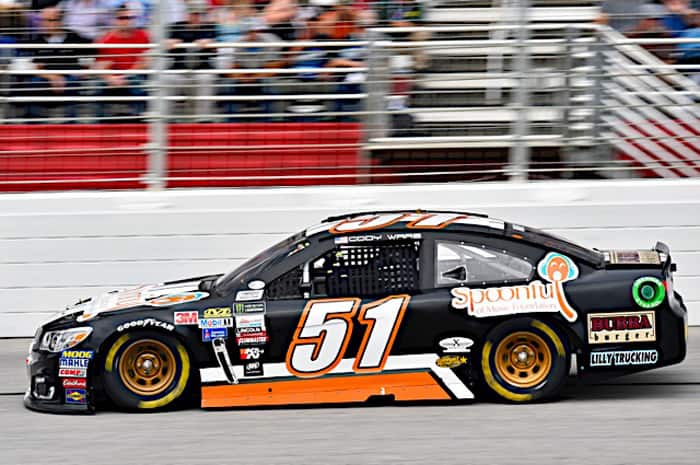 This past Sunday, 35 laps into the Axalta Pocono 400, Cody Ware pulled his No. 51 Chevrolet into the garage. The official diagnosis: a DNF due to a vibration, resulting in a 39th-place result.

Unfortunately we had a fuel pump go bad that ended our day early. We want to thank all our sponsors for their support!

But about an hour or so later, a NASCAR official announced to the media that Ware had been treated and released from the infield care center.

That’s because one reason Ware took his Rick Ware Racing machine off the 2.5-mile track is due to an issue he had been suffering with since the previous week at Dover International Speedway. In that race, he pulled off the track after completing 283 of 406 laps due to back pain.

“One of the things that happened is I was dealing with some back pain from the previous race at Dover,” Ware tells Frontstretch. “I’ve been going back and forth about it with the people at NASCAR about getting some things treated. I’m still in the process of that right now. I have to make sure I’m healthy and safe before we have more issues in the future.”

Ware, 21, said he is now being seen by Dr. Jerry Petty from Carolina Neurosurgery & Spine Associates. Dr. Petty previously worked with Dale Earnhardt Jr. and Denny Hamlin, along with other NASCAR drivers who have experienced back and concussion issues.

“I’m just having some back problems,” Ware continued. “With me being a tall guy in racing, especially with not having all the luxuries of a big team, you experience a wear and tear with your body. We’re in the process of finding out what we can and making an improvement moving forward. Obviously, I’m still young and safety is the No. 1 priority.

“I’m still working on the findings with the doctors and Dr. Petty and a lot of the guys at NASCAR have been taking good care of me. Once we get more information, we’ll keep everyone up to date.”

Ware has made three starts in NASCAR’s premier division in 2017, earning a best finish of 35th at Dover. In addition to running the Monster Energy NASCAR Cup Series race at the Monster Mile, he ran 190 of 200 laps in the Camping World Truck Series contest that Friday, finishing 18th.

Ware did not state what could have caused the injury or what his prognosis is.

“Especially as young as I am, I have a long life ahead of me,” Ware said. “I love racing, but I can’t let it ruin my body forever.”

As of Wednesday afternoon, the driver of the No. 51 car for Michigan International Speedway is listed as TBA. However, Timmy Hill has attempted 11 races and qualified for nine with Rick Ware Racing.

Ware later posted on Facebook, saying, “This morning I got an MRI done and the results show that I have some compression and discs issues in my lower back. I have been in contact with both the neurosurgeons and NASCAR and we have come to a decision to sit out until I can heal.

“This is one of the struggles of a small team. Not having a proper seat compounded this problem for me. I won’t be back in a car until my back is healed and I have a proper seat to use.”