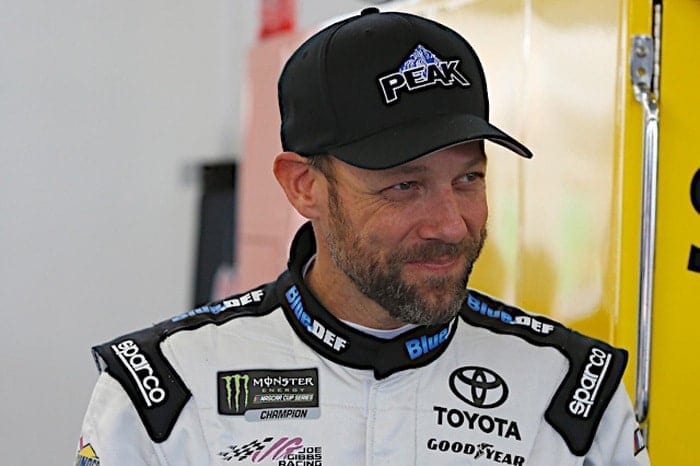 Did You Notice? … We are getting closer to the possibility NASCAR will end up with 17 winners this season? After Ryan Blaney broke through at Pocono, the third first-time winner this season, there’s a growing list of upstarts pushing into the playoffs. 10 different names (and nine potential playoff spots) have been snagged in the first 14 races.

Blaney and Ricky Stenhouse Jr., two of those three guys will be making their first postseason appearance. The third, Austin Dillon, is a bit of an upset after the way his No. 3 Chevrolet has run most of the year. He sits 20th in points, outside the top 16 along with fellow Richard Childress Racing teammate Ryan Newman.

Their names on the winner’s list just 14 races in mean a lot of drivers are still missing out. Consider these eight veterans still on the outside of Victory Lane looking in who could push the playoff eligible winners to 17.

Joey Logano: He’s a tricky one. Logano’s Richmond victory was encumbered, which means he hasn’t yet clinched a spot in the playoffs. The No. 22 Ford has tumbled down the standings since then, posting five finishes outside the top 20 and sitting just three points above the cutoff line.

But Logano, who’s won 14 times in the last three seasons, has high hopes to bounce back before September. He’s the defending champ at Michigan this weekend, a race he dominated last June. At Watkins Glen, he’s got a 1.5 average finish his last two starts.

And his teammates? Brad Keselowski’s won multiple times. Blaney just hit the bulls-eye Sunday. So chances are high this Team Penske outfit will get it together.

Kyle Busch: Just one year removed from dominating the sport, putting all four of its drivers in the Chase round of eight, Joe Gibbs Racing has yet to win. Busch has been knocking on the door, though winning the pole two straight races only to come up short.

So far this season, he’s led 703 laps, the most of any driver not named Martin Truex Jr. It’s hard to shut someone out of Victory Lane with that type of total. As much as Busch’s post-race antics have been debated, you have to admit no matter what side you’re on he’s gone through an unusual share of rough luck.

Matt Kenseth: Kenseth, the 2003 Cup Series champ, has gone on to make 12 playoff appearances in 13 tries. Despite a rough start to the year, there’s nothing to believe he won’t make it 13 for 14. Just three points outside the cutoff, he’s earned four straight top-12 finishes and reestablished the consistency that made him a champion in this sport. He has 14 wins in four years with Joe Gibbs Racing and is unlikely to put a zero on the board.

Keep in mind Kenseth also led 164 laps at Richmond earlier this year. He’ll be a favorite in the season finale if he’s still winless by then.

Denny Hamlin: Hamlin, yet another winless JGR veteran, has an impressive record he needs to protect. Since 2006, his rookie season, he’s won at least once every year in the Cup Series. It’s the second-best active streak behind seven-time series champ Jimmie Johnson.

A few years ago, it took until Homestead to put Hamlin’s No. 11 on the board. History says it shouldn’t take that long this time. He was the sport’s best road racer in 2016, earning a 1.5 average finish at Sonoma and Watkins Glen, and should be stout at both facilities again. Don’t count him out at places like Bristol and Darlington, too.

Kevin Harvick: Harvick, who came up just short at Pocono, has flashed consistent speed all season. With seven top-10 finishes in eight races, it’s only a matter of time. My bet is he’ll cash in on an intermediate like Michigan, the cookie-cutter tracks Stewart-Haas Racing has shined on in recent years or perhaps even Indianapolis. Ford’s newest four-car acquisition is not going to go the rest of the regular season winning only February’s Daytona 500….

Clint Bowyer: While we’re at it with SHR, why not Bowyer? He’s driving the same No. 14 Chevrolet Tony Stewart won with at Sonoma last year. Winless since the middle of 2012, he’s desperate to break the drought and sits a solid 10th in points.

Keep an eye on him at Loudon in particular. Bowyer has two wins there and was always a strong contender in his days with RCR and Michael Waltrip Racing.

Chase Elliott: With rival Blaney breaking through you’ve got to think Elliott is anxious to follow. Keep in mind Jeff Gordon, the man he replaced, broke through in his second full season.

Elliott has shaken off the sophomore slump as of late, posting two straight top-10 finishes and now heads to a Michigan track where he’s been runner-up twice. At some point, you stop stubbing your toe and start living up to expectations.

It won’t be long. And once one comes, just like Blaney, a whole flood of victories is going to follow.

Dale Earnhardt Jr.: Sure, Earnhardt hit a low point this weekend at Pocono. He blew not one, but two engines by shifting down from third to second gear. Admitting fault, the confidence of NASCAR’s Most Popular Driver when he spoke appeared to be at a serious low.

But remember Tony Stewart and Jeff Gordon, men who broke through during their retirement seasons. One was out to lunch most of the year; the other needed consistency to make the playoffs. But by the time the season was done, they had each summoned up one last Herculean effort to make Victory Lane.

Who’s going to bet against Earnhardt at Daytona? Remember July 2001? This time doesn’t have quite the same dramatic theatrics on the line but Earnhardt will have plenty of horsepower under the hood.

There you go. Eight drivers, 17 winners and suddenly there’s an odd man out for a playoff spot after Richmond. And keep in mind how many we didn’t mention. There’s Jamie McMurray, always a threat to win on the plate tracks and perhaps a place like Bristol. You’ve got Kasey Kahne driving for Hendrick Motorsports and fighting for his career. Then, there’s the outstanding rookie trio of Erik Jones, Daniel Suarez and Ty Dillon, each of whom have shown they’re plenty capable of pulling an upset.

And what about a Daytona surprise? David Ragan, anyone? AJ Allmendinger at Sonoma? As the sport’s transition toward new faces continues it’s refreshing to see such a long list.

Regarding the last Quick hit did you notice…
NASCAR itself is the likely culprit in any manufacturer choosing to not enter the sport.
Reason is simple NASCAR in it’s short-sighted, ADD appearing, decision making has made it all but impossible to allow new teams much less manufacturer’s into the sport. Who currently racing would be changing over?
Also if anyone was smart, like Monster Energy and not the TV people, they would see a potentially sinking ship and ask WHY would we want to get on board and spend likely 100+ million dollars to develop and enter into this?
It does not make any sense for another manufacturer to enter regardless of current car counts.

Maybe Michael Waltrip would be willing to start a team. It worked out so well with Toyota.

But you make a good point. The unintended consequences of the charters is that there is another significant barrier to entry (as if starting a program/team from scratch isn’t precarious enough).

IF there were more than 16 eligible, Brian would change the rules depending on who would miss out. Because he can. After all, his “rules” are written in vanishing ink.

I can’t get that worked up over Danica in this situation. Some of these autograph seekers are “pigs”. They run around the track and garage area with portfolio’s full of hero cards and backpacks full of diecasts. I had tickets for an autograph session at Darlington last year and the ticket stated “one item per person”, but you still had people in line with bags full of stuff. A line that should have moved fairly quickly took forever. NASCAR has the most access to the stars of any sport, and some people abuse it.