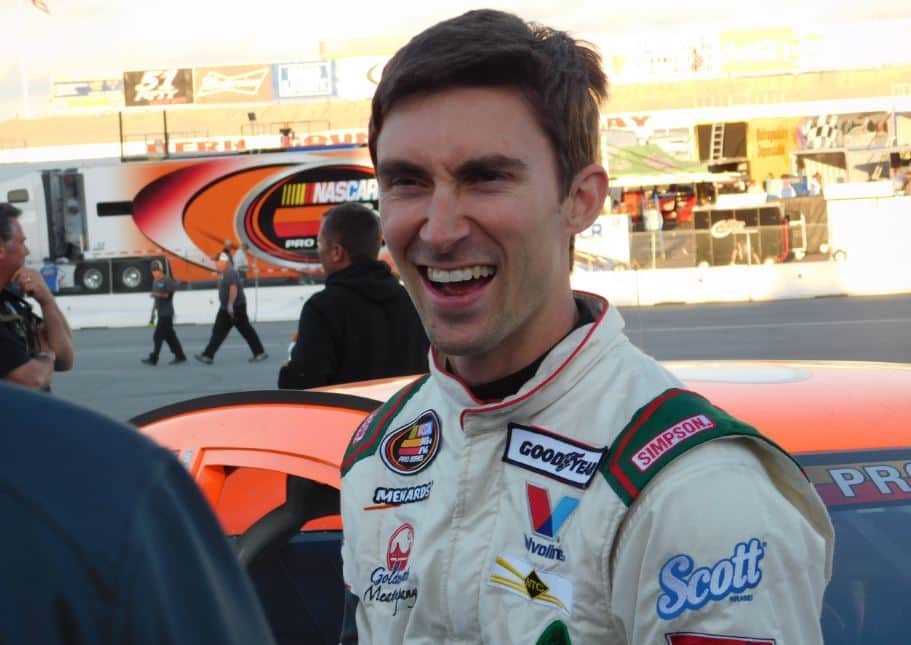 Before the 2016 season finale for the ARCA Racing Series last fall, Michael Self was a name struggling for relevancy.

Competing full time in the NASCAR K&N Pro Series West from 2010 to 2013, winning six times, Self picked up a seven-race XFINITY Series deal with JD Motorsports in 2015. After that, Self was on the sidelines, hard at work to get back on the racetrack.

Just in time for the ARCA finale at Kansas Speedway, Self and family picked up Sinclair Oil Corporation, who Self brought to a third-place finish in their first racing deal. For Daytona in February, Sinclair returned with Self before expanding to an eight-race partnership that includes both ARCA and K&N West racing.

Before finishing third at Pocono Raceway in his No. 28 Chevrolet, Frontstretch sat down with Self to discuss his new sponsor, the importance of brining new sponsors into NASCAR and why he chooses to keep his hopes “realistic.”

Zach Catanzareti, Frontstretch.com: How is the 2017 season going for you? You’ve picked up sponsor Sinclair Oil and have been back at the track.

Michael Self: The Sinclair thing has been absolutely awesome. That’s something that me, my dad, fiancée were able to put together, just the three of us basically by cold-calling them. We put the sponsorship together the old-fashioned way, worked on that for about a year before we got them on the car in Kansas. Everything we have done with them since has been really, really exciting and a lot of fun.

This is their first venture into motor sports so it’s a new experience for them and their customers. Everyone seems to love the way the car looks, we get great fan feedback so that makes it fun. It’s really what I come looking forward to at the track now. I love driving but working and representing Sinclair is the pride of me being here every weekend.

Catanzareti: Did Sinclair bring you back into racing?

Self: I was all but done [in my career]. I haven’t raced anything consistent for the last four years; 2013 was the last time I raced full time. I didn’t race anything in 2016 except for that one ARCA race. Fortunately, things went really well, had a good result and things went well for Sinclair. So, they gave me an opportunity to do five more of these races this year, then I got he opportunity out west to run the K&N West deal with the Sunrise Ford team.
Out of nowhere, I went from racing nothing to what is going to be a 19-race schedule this year. And it all comes from Sinclair giving me the opportunity at Kansas, staying on board, and giving me the chance to stay relevant.

Catanzareti: What was that time like out of the car?

Self: At first, it was hard. There was a time I went through I thought it was the end of the world if I wasn’t driving a racecar. It was all I ever done or thought about doing. I was one of those kids who graduated high school, thought I was going to be a racecar driver so I went and focused on racing.

Then 2013 came around and there was nothing left. It was really, really hard to grasp that. Because it was so hard, I went out on my own to figure out how I could do it again. I went on my own to learn marketing, sponsorship and putting sponsorship deals together on my own. I learned all through trial-and-error.

It’s tough to say, but maybe being out of the car for a little while was a good thing. It inspired me to go back to school, I’m working on getting my Business Administration degree. I’ve got a big passion for marketing and so much more for what all it takes to be a racecar driver and to get to race every weekend. I never would’ve had that if I didn’t have to spend time outside the car.

Catanzareti: How did you learn the importance of sponsorship in this process?

Self: If it weren’t for Sinclair, I wouldn’t be here right now. If I want to drive, sponsorship is going to be everywhere. When you’re sitting outside the car watching people race, you know you can still go out and do it physically on track, but nobody cares about that more than you do. Once I realized that, that fueled me to get out and searching for sponsors on my own. Again, realizing nobody was going to work on my behalf to put sponsorship together, it gave me so much more motivation to go out and do it myself.

Catanzareti: What is your opinion on young drivers coming up? Some have not struggled like you have, they’re 17, 18 years old and already in Trucks.

Self: My dad was able to fund my racing until 2013 through my last year in K&N. Last year, I had a little help from my team owner. I would be a hypocrite if I said that it’s not good to be self-funded. There are a lot of kids, 99 percent of the kids out here are, and you’re going to have to be at some point. It’s going to be near impossible to get a sponsor without any results or on-track stuff to talk about.

You have to start somewhere, but my problem with it is when you’re paying your way to run Trucks or XFINITY or national NASCAR series. This is a marketing tool, and it’s a good one if used correctly, and by bringing your own money in and not supporting sponsors or giving sponsors free space on the car because you’re funding it out of your pocket… well, you’re taking away a sponsorship portion of it, the part that makes this a business opportunity for people. And that hurts, in my opinion.

Sponsors thrive off other sponsors, business-to-business opportunities, meeting each other in the garage, coming up with ideas. That’s how NASCAR worked all through the 2000s. It’s important that is still works.

We need legitimate sponsors to keep this world going and to keep racing going. There is going to come a time where everyone is going to be funding it out of their own pocket — first off, that is not sustainable for a tremendous amount of time. Second off, it’s just going to wear out. You can’t have something where there are no sponsors left.

Catanzareti: Talent got you in the sport in past, now you have to learn marketing to stay. Is that a good change when it comes to broadening your skills as not only a driver but a person?

Self: For me, for sure. It has changed my life because I have had to go out and figure out how to get sponsors and how to keep them. It’s improved every aspect of my life off and on the track and made me realize how hard we have to work for this.

I think it’s very important for kids to understand… the reality of this should not be that your parents can pay your way through the entire time. This is not realistic. Frankly, I feel like you have to learn those skills, that is what is going to help the sport as a whole grow. it may sound kind of harsh, but it is what I believe.

I think NASCAR has the opportunity to be the best sports marketing venue. I really do. I think the exposure still has a potential to be big. We just need to all realize that and re-capture it.

There was a time where talent would get you right in and the teams had great marketing success. But the price has gotten higher, people don’t have as much to spend on marketing dollars these days. Who are they going to take: this kid over here who may have won 10 of his 20 races last year or this kid who has run all that great but who can bring the check? Well, it’s a business. And at the end of the day, you’re not going to lose money running your business.

Catanzareti: You’re back in the K&N West Series with Sunrise Ford. It’s been years since your last season, that Todd Gilliland kid is kicking tail but how have you been?

Self: It’s fun. It’s different going back to the short tracks, a lot of tracks I’ve been at before, but I haven’t bene on a short track in four years. It’s been difficult to reacclimated to that. Gilliland, he is a great driver, he has great equipment, those kids are fast. After missing the first race of the year, we’ve rebounded to 10th in points and we’ve been able to run top five every race. Definitely made progress on it.

We’ve been able to work it where all the ARCA races I run wont conflict. This is going to be the tightest one with me having to fly to Colorado tomorrow morning. But we’ll finish out the West season. As far as ARCA goes, we’ll be at Iowa, Lucas Oil Raceway Park and Kansas.

Catanzareti: Is your goal to get back in NASCAR with one day to get into Cup?

Self: Not really, surprisingly. It’s for a bunch of different reasons. Don’t get me wrong, I wouldn’t turn down the opportunity. I would love the opportunity to race at that level. But for me, I try to keep my goals realistic. My goal is to take Sinclair to the level it benefits them most as a business partner.

I would love to be like a Matt Crafton and go race Trucks and make a living off the Truck Series — I love the Truck Series, it’s my favorite thing to watch. If you were to ask me what my goal was, [Cup] would be a dream, but my goal is to go weekend by weekend and perform the best I can.

Catanzareti: Is your way the right way to do it?

Self: It’s my approach. I’ve gone a lot of years outside the racecar and I know the in’s and out’s of this sport and the politics of this industry. I try to keep my expectations realistic.

(Below is a video capture of our conversation with Michael Self)