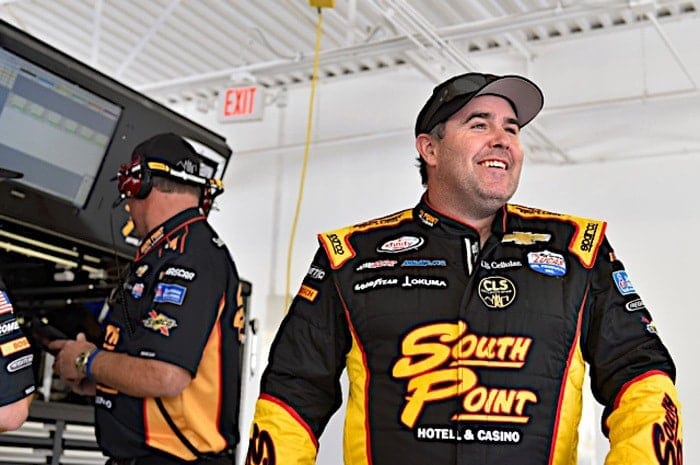 Brendan Gaughan has spent more days in NASCAR than he has ahead of him, but at 41 years old, the Las Vegas native is still ultra-competitive.

This season is Gaughan’s fourth-consecutive competing for Richard Childress Racing. Through 12 events, it’s been a bit of a up-and-down roller coaster season.

Coming off a sixth-place effort at Pocono Raceway, Gaughan moved up a pair of positions in the championship standings to 13th, 28 points behind Dakoda Armstrong for the final playoff position. With Darrell Wallace Jr. dropping out, he will essentially move up to 12th, and into the playoffs.

However, Gaughan’s sixth-place effort is just the third top-10 finish of 2017 for the No. 62 team, and he’s posting an average result of 22.2. Five finishes of 30th or worse include three consecutive DNFs at Bristol Motor Speedway, Richmond International Speedway and Talladega Superspeedway.

“It’s sucked,” Gaughan told Frontstretch of his 2017 season. “We started off good in Daytona. Everything went great. From there, the proverbial wheels fell off. “The only solace we take is that every week we have been fast.

“It’s not like we are running 20th and stuff is happening to us and everyone is pulling their hair out and are going ‘man, we suck.’ We have run in the top 10 every week, but a lot of things have happened to us. The team can stay positive knowing that we’re fast. We just have to get rid of some of the bad luck and grumblings and we will be just fine.”

Outside of Gaughan’s three top-10 finishes, the No. 62 car has just three other finishes inside the top 20. However, his teammate Brandon Jones has also struggled this year, sitting 17th in points, 63 markers back of the cutoff.

But Gaughan is confident that the team will turn it around.

As well as running the the same four full-time teams as last season, Richard Childress Racing has added rookie Daniel Hemric to the mix. Arguably, he has been one of the biggest bright spots for the organization, sitting fifth in the standings, with three front row starts.

Adding a fifth team has created more challenges to the XFINITY Series organization, but not taken away from Gaughan’s team. For the fourth straight season, he’s working with crew chief Shane Wilson, with whom he won a pair of races in 2014 at Road America and Kentucky Speedway.

“It didn’t do anything, really,” Gaughan said of introducing a fifth team. “We have the same guys. They changed the way they do some of the stuff with the procedures of how cars get to us, but this team is run so well. The organizational structure of the team is run so well that it didn’t really hurt anything.”

RCR is the only organization in the XFINITY Series that is home to five teams. Austin Dillon, Paul Menard and Ben Kennedy are sharing seat time in the No. 2 car, as Ty Dillon is competing in 27 races this season in the No. 3 car while he continues making the transition to the Cup Series.

Some would think it’s too much to ask for a team to have five full-time cars, even RCR, which won the 2012 XFINITY Series title with the older Dillon. But with Hall of Famer Richard Childress leading the helm, it’s been an adjustment period, but nothing drastic.

“It would be too much for most places if you didn’t have a structural organizational effort in place,” Gaughan said. “This place has that in place. I’ve run my (No.) 62 car and then one would wreck and a couple weeks later, I would end up with a car Austin (Dillon) drove two months ago. That’s how they run their cars, it’s organizational. We’ve wrecked a bunch on the 62, we’ve had a bad year. But all they have done is been able to pull cars from the pool of vehicles that we have for all five teams and we have more people designated to build XFINITY racecars.”

The data and technology between the Cup and XFINITY Series’ is split down the middle and everything is shared at RCR. There is no way for one team to have a big advantage on the rest of the organization, but it’s all about learning from each other.

“I’ve never been the guy that’s going to be in your face saying ‘come here, look at me, listen to this,’” Gaughan said of the young guns at RCR. “When they need me, I’m always there. And when they need me they come and ask me questions.

“In the meetings, they ask questions on how something happened. But hell, it’s hard for me to give them feedback when Daniel (Hemric) is faster than me in practice. What’s he want to ask me for?”

As the summer months hit, typically this is where Gaughan heats up. Last season, seven of his career-high 16 top-10 finishes came between Memorial Day and Labor Day weekends, with a best result of second coming at Road America.