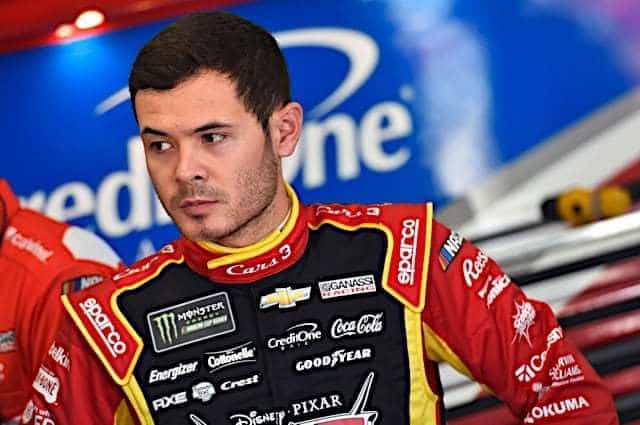 The Monster Energy NASCAR Cup Series is at Michigan International Speedway this Sunday afternoon for the FireKeepers Casino 400.

This week’s fantasy forecast is backed by DraftKings, the No. 1 platform for daily fantasy sports. You can jump in on all of the daily fantasy NASCAR action at Michigan this weekend by signing up here for a free entry into one of this weekend’s contests. All you have to do is make a $5 deposit to get started!

Larson led first practice with a time of 35.857 seconds, averaging a speed of 200.798 mph. Later Friday afternoon, he picked up his third career pole at the track where he sealed his first career Monster Cup Series win last season. In that race, Kyle led 41 laps. In the following race at Michigan late last season, Larson finished third.

Kyle is on pace to set career highs in every category this season, but he has already reached, and will shatter his laps led number this season. Through 14 races, Larson has led 616 laps, nearly doubling his total from all of 2016. With his front row starting position on Sunday, Larson is a heavy favorite to lead the most laps, and has great potential to dominate the DraftKings contests.

He won the second stage of last weekend’s race, and finished in seventh. That seventh place finish was Larson’s ninth top-10 through 14 races. He is as hot as they come right now, and has shown no signs of slowing down. Don’t hesitate adding him to your lineup because of his price, he will be well worth it at Michigan.

Prior to his one year stint with HScott Motorsports in 2016 that resulted in finishes of 23rd and 40th, Bowyer had nine top-10 finishes in 10 races at Michigan. In all nine of the races in which he did finish within the top 10, he finished with positive position differential points on DraftKings. While a third place starting spot on Sunday will make it tough to continue that trend, there is more potential to add points in other areas, such as laps led, and fastest laps.

Bowyer is priced at a ridiculously low price of $6,800 on DraftKings. This comes as a surprise considering his success at the track over his career and the fact that he is averaging a 13th place finish through 14 races this year. It may be because of his lack of a top 10 finish in the past three races, but Clint is still sitting comfortably at 10th in point standings.

Bowyer is in a fast car this weekend, and is racing for a fast team. He is a steal with his price when compared to any other driver with similar success. Clint should be owned in 100% of DraftKings contests. 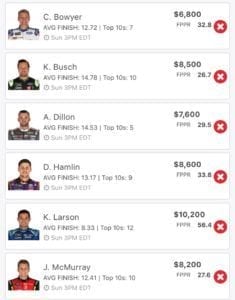