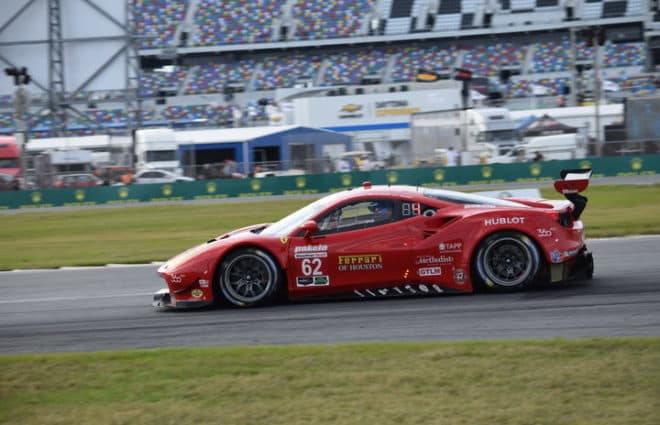 Last year, Risi Competizione finished second in GTE-Pro at Le Mans but was every bit as fast as the class winners.  In 2017, we’ll never know if that is true or not since the day ended for the team prior to the one-quarter mark.

Pierre Kaffer, driving the No. 82 Ferrari 488 GTE (the car as raced at Daytona in January is pictured above) was coming up to the first chicane on the Mulsanne Straight.  Suddenly, the faster LMP2 No. 28 ORECA 07-Gibson driven by TDS Racing’s Matthieu Vaxiviere attempted to pass.  Once he was inside of Kaffer, Vaxiviere swept up in front of Kaffer in order to position himself for the first chicane, ignoring the Ferrari’s presence.  It ended badly for the Risi Competizione Ferrari.

While Vaxiviere drove away with no damage, Kaffer went hard in the wall, heavily damaging the Ferrari.  Kaffer was OK, but he was unable to restart the car.  As a result, Risi Competizione has retired from the 24 Hours of Le Mans race.

Heavy damage was done to the Armco barrier as a result of the crash. A “Slow Zone” was instituted so that track crews could bring heavy equipment to the scene in order for the wall to be repaired.

Phil Allaway has three primary roles at Frontstretch. He's the manager of the site's FREE e-mail newsletter that publishes Monday-Friday and occasionally on weekends. He keeps TV broadcasters honest with weekly editions of Couch Potato Tuesday and serves as the site's Sports Car racing editor. Outside of Frontstretch, Phil is the press officer for Lebanon Valley Speedway in West Lebanon, N.Y. He covers all the action on the high-banked dirt track from regular DIRTcar Modified racing to occasional visits from touring series such as Tony Stewart's Arctic Cat All Star Circuit of Champions.
Previous Brad Keselowski Fastest in Michigan Happy Hour, AJ Allmendinger Crashes
Next Denny Hamlin Beats William Byron in Michigan XFINITY Series Photo Finish 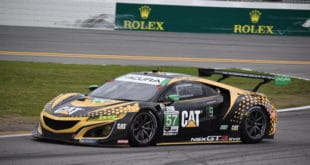 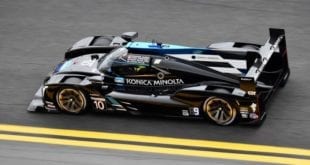 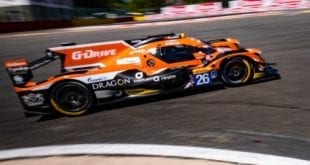