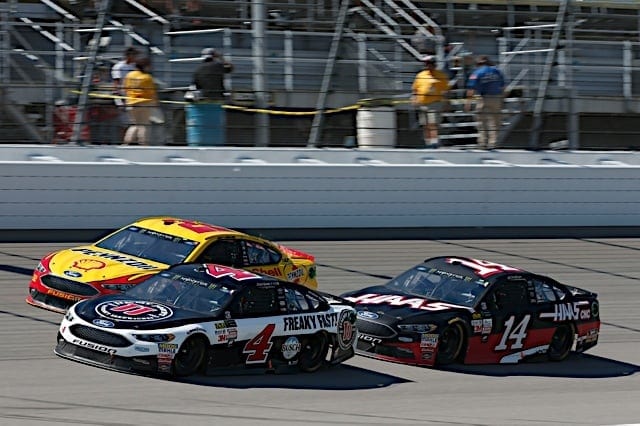 Kyle Larson is a master at restarts. It’s something that Jeff Gordon always pondered during the late stages of his career, but one of NASCAR’s next potential superstars has restarts down to a science.

The  No. 42 car did its best job to depict the likes of Lightning McQueen from Cars 3, which was slapped on the rear-end of Larson’s machine at Michigan International Speedway. Whether Larson had to make passes on the high or low side, he did so with ease, leading 96 laps on the day to bring home career win No. 3 with Chip Ganassi Racing.

What … was the deal with that final debris caution?

You would think, considering stage breaks NASCAR would be done calling debris cautions except in the case of extreme circumstances. Prime example: a giant garbage bag rolling down the frontstretch in the early laps at Michigan. It was a bag so big it looked like it could wrap itself around a car and throw it away.

But the debris caution with 21 laps left, well, that seemed a bit unnecessary. Sure, Kyle Busch probably wouldn’t have made it on fuel but that took a potential victory away from the No. 18 Toyota. The outcome of the race, setting up to be a fuel mileage finish was altered by a piece of, well, something that wasn’t shown all that well on your television screens.

In NASCAR’s defense, it’s the first time a race has had two debris cautions since Richmond International Raceway all the way back in late April. But with the race winding down, the level of safety concern should be sky high in order for you to knowingly change the outcome of a race.

One could argue you could call a debris caution anytime, anyplace over 400 miles. There’s that much trash on the track at all times. So keep them to a minimum and, for the love of God show every fan within a 5,000-mile radius what the debris is when the caution waves. You can’t have a conspiracy theory if you can actually see what you’re actually calling the yellow flag for.

Where … did the pole-sitter wind up?

Just where he started — first. It’s that plain and simple.

Larson earned his second pole of the year this weekend. Once again, he showed how strong he can be on the 2-mile racetracks. On Sunday, he led 96 laps, more than double the amount he led last August when he went to Victory Lane for the first time in his Cup career.

After he won from the pole at Auto Club Speedway earlier this year, the triumph is an extra boost for Larson entering the playoffs. Through 15 starts this year, he has 712 laps led, more than his previous three-plus seasons in Cup competition of 548 circuits out front.

When … will Chase Elliott cash in on Victory Lane?

Soon. After Sunday’s runner-up finish at Michigan, Elliott now has a three-race history of being the bridesmaid in the Irish Hills. Runs of second, second, and second beg the question of just how much longer until he finishes first.

“We had a couple of opportunities to get the lead,” he said. “Unfortunately, it just didn’t work out. But we’ll move on.”

The next chance Elliott might get at Victory Lane? It literally might be this racetrack in August.

Looking ahead, between now and then Daytona’s restrictor plate race in July is Elliott’s best chance. He led 39 laps there in February, contending most of the day after winning the pole for the Daytona 500.

But you have to think with Dale Earnhardt Jr.’s struggles Hendrick Motorsports will be pulling out all the stops for the No. 88. And outside of Daytona? Elliott was 31st in his only start at Kentucky, struggled mightily at Loudon and was oh, about average last year in the Brickyard 400.

So unless there’s another summer surprise in Pocono, expect Elliott’s next major chance to come here. While it’s been a frustrating few months for Gordon’s replacement, there’s no doubt he’s getting close. A better restart against Kyle Larson on the inside would have won him the race.

Why … was Michigan’s inside line so awful on restarts?

Outside of Martinsville, you’d be hard-pressed to find a race where one line made such a difference on restarts. Martin Truex Jr. started on the inside multiple times late in the race and dropped like a rock. Elliott slipped, not once but twice, while Ryan Blaney‘s slip-up ended with Danica Patrick wrecking on the backstretch.

“Just stinks when you have to race like that,” Truex said, who watched his track position evaporate in the final laps. “You just get in a bad spot and there’s nothing you can do about it. Just wrong line on the restart every single time all day long and couldn’t use the best car to win.”

It seemed no matter where you were, the inside line gave you an anchor to deal with heading into Turn 1.

“Guys can pin you down, get you free,” Erik Jones said after his 13th-place finish. “[Makes it] really hard to get some good momentum off of Turn 2 and you get kind of freight trained by the top.”

“On the bottom,” Larson added, “They have the option of kind of pulling out and trying to hang you three‑wide or whatever. I think the outside is good ’cause the guy behind you pretty much stays in line.”

It was Larson who bucked the trend, using the inside line and a perfect push from Blaney to grab a lead he would never relinquish on a late restart. But other than that? It was game over for virtually anyone who would try a slick move.

How … did Joe Gibbs Racing blow an opportunity to win?

While Patrick had her share of bad luck at Michigan it was Joe Gibbs Racing who continued to be snakebit. Each and every one of their cars watched an opportunity slip through their fingers.

You had Denny Hamlin, on the inside of the front row for the final restart only to get bit by that bottom groove. There was Matt Kenseth, second for much of the second stage only to shoot himself in the foot by overshooting his pit stall twice. Add in Kyle Busch’s awful restart from the lead, following a debris caution with 21 laps remaining and a strong day for his No. 18 Toyota turned to seventh.

Oh, to add insult to injury rookie Daniel Suarez was an innocent victim of the day’s big wreck. So if you’re counting at home that’s 15 races, zero wins for a team that went seven-for-12 to start the 2016 season.

Only saw Las 15 laps. Next wed snoozing for sure. Guess the big question will be if Jr misses a shift on road course.

I just realized, next week is last fox broadcast. No more Waltrip bros for the most part. Guess Mikey got tired of hunting for drivers fir grid walk at from if field, so he started at rear,and those guys won’t run from him cause they’ll get tv time for their sponsors.

I missed the race, and as much as i don’t mind missing them, i still do want to watch them more than i don’t – so I guess i’m still invested.

What i still haven’t made any effort to understand is the points program, as they’ll jam it down my throat when it matters leading into the chase (yes…i still call it the chase)

Ok – enough rambles from me.

I only watched the very end of the race since most of the time IMO Michigan has produced more snoozers than exciting races so why bother.

I was happy that Larson won, just as I was happy that Blaney won last week. The stage racing & points system does absolutely nothing to pique my interest in NASCAR going forward. However having new faces in VL might at least encourage me to tune in for the end of each race.

Caw-shins, smh – the first one (plastic bag) ….& the comp caution …& the 2 staged breaks …not to mention the last one! They’re ALL bogus! ALL of them! Great example of how to systemically RUIN a motorsports event & a great example of why Nascar can not compete with categories that host integral motorsports.
I watched nearly ALL of the 24hr of Lemans & ALL of both R11 & R12 of the AV8 Supercars from Darwin. THAT is motorsports – Nascar is much of an exhibition anymore, in the Monster-Truck or Drifting vane.

…oh & you better believe every driver up & down the pit road is reviewing Larson’s restarts.
Side drafting is nothing new. Since Gen 6 it’s been emphasized. Most of the Cuppers are proficient manipulators of it. But I struggle to recall a better exemplification of it being exploited so deftly on a restart, than with 2 – 3 of KyLar’s late MIS restarts. Especially the first late one (42 vs 18), where KyLar owned KyBu. & that was from the inside lane where NO ONE prevailed all day, yet KyLar did when it most mattered. Text book stuff that will be studied & emulated by drivers, young & old, for years to come.

Larson was on four tires and Busch was on two. Larson got a push from behind, Busch did not. Not a lot “owning” done by Larson on that one.

Racing will never be really exciting again untill that turf dozer of is taken off the cars. NASCAR would do itself a favor if they would get a mid to late 80s car, put it in the windtunnel and go with those numbers. That and make the flag(person) the starter of the race, eliminating the gamesmanship on restarts.