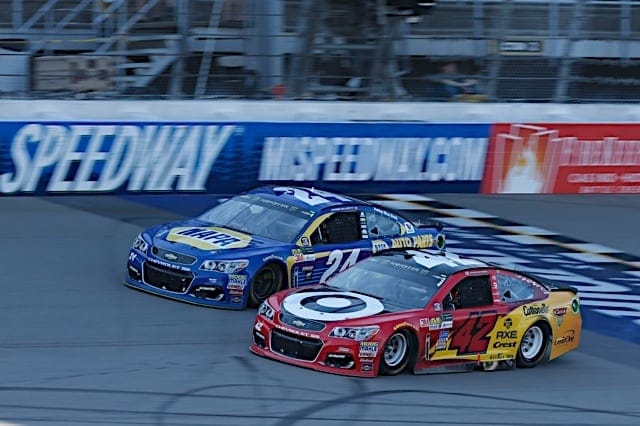 Race strategy could be more important in 2017 than it has ever been in NASCAR.  The implementation of stage racing has created opportunities for crew chiefs to get creative with pit stop decisions and overall plans for each race.

Up to this point, the significance of strategy has been most apparent in the early stages of the race.

However, Sunday’s race at Michigan International Speedway served as a reminder that pit strategies can still be very influential to the final finishing order, especially once the caution flags started flying at a rapid pace.  By the time race winner Kyle Larson took the checkered flag, the field shuffled so many times that many of the drivers who finished on the lead lap bounced from the back of the pack to the front more than once.

In the first place, the race included an unusually long list of drivers who had to start at the back of the field.  That group included several possible contenders: Jimmie Johnson, Kevin Harvick, Kurt Busch and Daniel Suarez.

An early caution for debris afforded the drivers at the back an opportunity to pit for fresh tires without losing much track position.  Yet only Johnson was able to crack the top 10 by the end of Stage 1.  Harvick and Busch both collected points in Stage 2, but their climb through the field showed how important track position would be.

Meanwhile, Larson and Martin Truex Jr., who made up the race’s front row, had an easy path to collecting stage points. Kyle Busch, Matt Kenseth, and Clint Bowyer were all fixtures in the top 10 during the first half of the race.

Over the course of a few long green-flag runs, the strategy of the leaders came down to protecting their track position, and most of them were successful at that.

Stage racing at Michigan may have provided some opportunities for alternate pit strategies, but clean air and track position were too important for anyone to deviate too much from their plans.

All of that changed in the final 50 laps.  The caution for Ryan Sieg’s spin created the perfect storm for crew chiefs to roll the dice.  Track position was still a big deal, but pit stops with 48 laps to go made fuel a concern for everyone.  Throw in the added advantage of restarting in the high lane, and it became clear that Sunday’s race would be won or lost on pit road and during restarts.

For Larson, the key was taking two tires during the caution for Sieg’s spin.  The move was risky because Larson had struggled following a two tire stop earlier in the race.  It was also likely that the No. 42 car had less fuel than many of his competitors.

But the move ultimately paid off for two reasons.  Larson gained valuable track position, which kept him in front of the field and out of the restart chaos in the closing laps.

Secondly, Larson was not alone.  Kyle Busch used the same strategy, as did several other drivers who had not been near the front for most of the afternoon: Jamie McMurray, Ryan Blaney, Dale Earnhardt Jr., Erik Jones, Ricky Stenhouse Jr. and Trevor Bayne to name a few.  These other drivers gave Larson a buffer back to the racers who took four tires.

The combination of four tires and worse track position sealed the fate of more than a few contenders.  Truex may have had the fastest car in the Irish Hills, but he struggled so badly on late restarts that he was unable to challenge Larson.  Kenseth and Johnson got mired back in traffic and never fully recovered.

Bowyer’s day turned out worst of all after he smacked the wall on Lap 187.  The No. 14 team had a solid day going, but Bowyer’s 26th-place finish dropped him below the playoff cut line.  Harvick, also on the four-tire strategy, received damage in a late-race melee that forced him to make an extra pit stop during the ensuing caution.

However, not everyone on the two-tire strategy wound up with a good finish either.  A rough restart for Blaney resulted in a cut tire that triggered the crash that damaged Harvick and wiped out Danica Patrick.  Jones, Stenhouse and Bayne all struggled to hold their track position, and only the No. 17 came out with a top 10.

On the other hand, Joey Logano, Denny Hamlin and Chase Elliott all fought their way forward in the closing laps to secure top five finishes.  None of those three drivers spent much total time in the top five, but they all ended the race there.  Once the dust had settled, six of the drivers who finished in the top 10 had earned only three stage points or less during the course of the afternoon.

Sunday’s race offered the perfect set up for a multitude of late race pit strategies.  The low attrition rate, primacy of track position, and moderate tire fall off created a situation in which pit road decisions had major consequences.  Yet there was not a single pit stop in the last quarter of the race where taking four tires was the obvious move.

The end of Sunday’s race turned into a real guessing game, leaving fans to wonder which driver and which strategy would prevail.  Larson had a fast car, but he would not have won without the right game plan in the pits.

Strategy remained a crucial factor in Michigan, as it has been for the 2017 season.  With Sonoma next up, do not expect that to change.