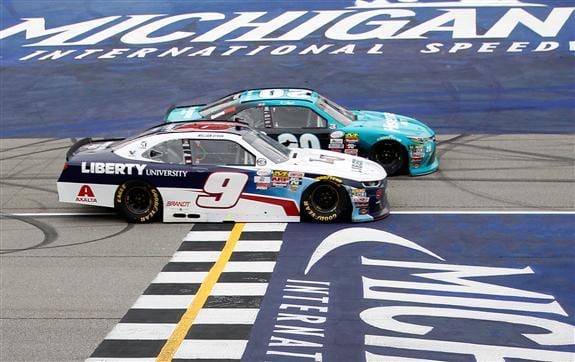 In a race where strategy was key at Michigan International Speedway, it came down to the final corner of the last lap between one of NASCAR’s most experienced drivers, Denny Hamlin, and its young superstar-in-waiting, William Byron. Their XFINITY Series battle came down to a photo finish.

Hamlin was dominating Stage 3 until a debris caution came out with 14 laps to go, putting him in a vulnerable situation. Fellow Cup Series regular Brad Keselowski restarted alongside the No. 20 machine with Byron right behind the No. 22 car. By the time the field exited Turn 2, it was the rookie who found himself out front after getting the restart of his life.

That made it Byron’s race to lose, opening up a slight gap but Hamlin quickly began to chase him down. Then, with just a handful of laps remaining, Matt Tifft went for a spin off Turn 4, leading to a green-white-checkered finish.

Again, Byron got a helluva restart, leading on the white flag lap of the Irish Hills 250. But putting his 14 years of NASCAR experience to use, Hamlin got the No. 9 car just loose enough to edge him out by a nose at the finish line. The end result was his first XFINITY victory of 2017 in three tries.

“He did a great job,” Hamlin said of Byron in the final laps. “I knew he had a really good car that last long run we had. He’s one of NASCAR’s next superstars, and I wanted to race him clean, I wasn’t going to turn him. I stayed below him and got him a little loose between [Turns] 1 and 2 that allowed me to get position, and into Turn 3, we both got sideways. He slid up just enough to let me barely get to that left rear and it was just enough to drag race past him.”

For Hamlin, it’s the first victory in his last four races in the XFINITY Series. His last triumph came at Charlotte Motor Speedway last May, leading 76 laps.

Michigan typically comes down to fuel mileage, not overall strategy. Teams pit when they are set to go to the finish, or so they think. It happens in every series all the time.

Today, it was about managing tires, though the tire falloff was not as drastic as we’ve seen at other tracks. The race was also about catching breaks at the right time, like the one Elliott Sadler saw coming with 43 laps to go.

20 laps prior, three laps before the end of Stage 2, NASCAR officials threw a caution for debris on the track. At the time, it looked like Keselowski was going to cruise to his second stage victory on the afternoon. But when the pits opened with two laps to go, he and most of the front runners pitted. Sadler stayed out and went on to win the stage as NASCAR did not resume the race prior to Lap 60, the end of Stage 2.

When the pits opened, eight of the nine drivers that stayed out to earn stage points pitted. Who was the lone exception? Sadler.

The gamble worked. With 18 laps of caution over a span of 40 circuits, the No. 1 car stretched their fuel mileage until another debris caution came out with 43 to go, putting them back in sync with the field. It’s a piece of debris that Sadler first reported over the radio.

Because it was nearly 20 laps since the leaders last pitted, everyone came in for what they hoped to be their final stop of the 125-lap race. Many teams took gas only, or two tires, but Sadler was forced to take four in order to fill the tank. When the race restarted, he drove like a bat out of hell, rocketing back inside the top five.

For some bizarre reason, strategy is always a part of the outcome at Michigan. It always has been, and always will be. In this case, Sadler used strategy to place himself third in the race while expanding his lead in XFINITY points.

Whenever Kyle Busch is in an XFINITY Series race, he’s the odds-on favorite, as he was today.

The No. 18 car laid down the third-fastest qualifying lap in XFINITY Series history on Saturday morning at 193.560 mph. But once the race got going, the pole sitter went backward.

Busch started the event across from a familiar foe, rival Keselowski. The race was not even 100 yards in before the two made contact, putting the No. 18 car into the wall and spinning into the infield.

The right side of Busch’s Toyota wound up caved in with the right rear quarterpanel pushed up against the right rear tire. The crew worked hard under caution to fix the car, keeping Busch on the lead lap but costing him valuable track position.

When the race restarted, Busch took his time, methodically making his way through the field. He  finished 19th at the end of the first stage after starting from the rear. Racing up to just outside the top 10 by the end of Lap 60, the No. 18 team elected to pit when the final caution came out to end the second stage. That led to a 20th-place result.

But the third stage is where the team turned up the heat. With there being two cautions in the final 14 laps of the race, Busch used his strength on restarts to move up. He worked his way to fifth, charging forward despite a battered and beat-up race car.

It’s Busch’s third top-five result in four races this season. But considering the speed he showed in qualifying, the race had to be a big disappointment.

In what started out as a bit of an eventful Stage 2, the biggest incident of the day came out on Lap 39 when Brandon Jones got loose off Turn 2, triggering a four-car pileup.

Jones’ No. 33 machine got turned 90 degrees, though he made a miraculous save. However, behind him, Ben Kennedy spun, and then got clobbered by Michael Annett, who got some help from JJ Yeley.

Kennedy and Yeley were put on the crash clock, but failed to make minimum speed, resulting in 36th and 38th-place finishes. Annett went straight to the garage, slumping to 37th, a season worst.

Halfway to the playoff cutoff, this wreck really cost Annett and Yeley valuable points. The No. 5 team remains 10th, but lost 29 points to Brendan Gaughan, who is currently the first driver outside the cutoff.

Yeley dropped one position in the standings, losing 16 points to Dakoda Armstrong and falling 36 behind him overall. Armstrong, despite his underfunded team continues to hold the final playoff spot.

It looked like it was going to be an average race for the 20-year-old. A spin also complicated his efforts. But with a bunch of pit strategy, especially late in the race, Jones was able to bring the No. 33 car across the stripe ninth. That’s his first top-10 performance of 2017.

Prior to a restart with nine laps remaining, Jones restarted outside the top 15 after making a pit stop for scuffed tires. Little did he and crew chief Nick Harrison know it would catapult them inside the top 10.

Jones also finished seventh in the second stage, earning much needed stage points. Coming into this event, the No. 33 team had finishes of 20th or worse in five of the past six races, including three of 33rd or worse. Last week at Pocono, the team was having an average run before cutting down a tire, resulting in a 36th-place effort.

With 13 races to go in the regular season, Jones now sits 16th in the championship standings, 47 markers behind Armstrong. At this point last year, the No. 33 team was fifth in points, having already earned seven top-10 finishes.

Clearly, Jones will need to break out of this sophomore slump to get his Richard Childress Racing machine in the playoffs. Was Saturday the start of that process?

Yet again, the top stars in the sport dominated an XFINITY Series event. At least this time, the duo of JR Motorsports teammates Byron and Sadler gave them a run for their money.

Hamlin picked up his first victory of the season, notching Joe Gibbs Racing its fourth. Keselowski came home fourth after leading a race-high 54 laps. Meanwhile, Busch rebounded to finish just behind the No. 22 machine in fifth.

Ty Dillon ran as high as second in the event, tying a season best sixth-place effort. Paul Menard put an end to his horrendous luck in the series, crossing the finish line seventh. That’s his first top 10 in three races this season.

Ryan Sieg is making his second career start in the Cup Series on Sunday for BK Racing. In XFINITY, he finished 15th for his family-run organization. It’s just the No. 39 team’s second top-15 result of the season. At this point last year, Sieg had five top 15s.

“I don’t think he knew I was there. Lifted the best I could, I guess I just didn’t do a good enough job lifting. I was already pulling up alongside of him. Tried to lift but I guess we could have done a better job.” – Brad Keselowski on the Kyle Busch wreck

“I am proud of the way we battled. We struggled on restarts and I had to get what I could on restarts and go to battle after that. If we can be no worse than top 10 each week we will be right where we want to be.” – Ryan Reed, finished eighth

“I thought we were solid. We fought really loose the whole race, especially the restarts. We couldn’t get going great but we fought all day and had a good strategy.” – Cole Custer, finished 10th

The XFINITY Series has a ton of momentum heading into its first standalone race of the season next weekend in Iowa. Sure, the last nine races have been won by Cup Series regulars. But overall, there have been two last-lap passes for the victory during the last two weeks.

Hamlin took Byron to school on the final lap, as the 19-year-old put it. But having XFINITY Series regulars battling for wins, just like Justin Allgaier last week is what the sport needs when there are so many star-studded Cup drivers racing. Their aggression has created must-watch events in this series.

Now that the summer stretch of racing is up and rolling, expect more of the same.

The XFINITY Series will head to Iowa Speedway Saturday evening for the first of two events at the track in a five-week span. Sam Hornish Jr. is the defending winner of the event and will be making his season debut with Team Penske. Last season, he started from the pole en route to leading 183 of 250 laps and picking up his fourth career victory in the XFINITY Series. The green flag in the American Ethanol E15 250 is set to fly shortly after 8:30 p.m. ET o FOX Sports 1.

Maybe if the Cup event finishes like Saturday’s the talk about Michigan and other tracks will taper off. When did the talk about poor racing start? It wasn’t in the 70s, 80s or 90s. I’ve said before it’s not the tracks. It’s Brian’s cars and drivers.