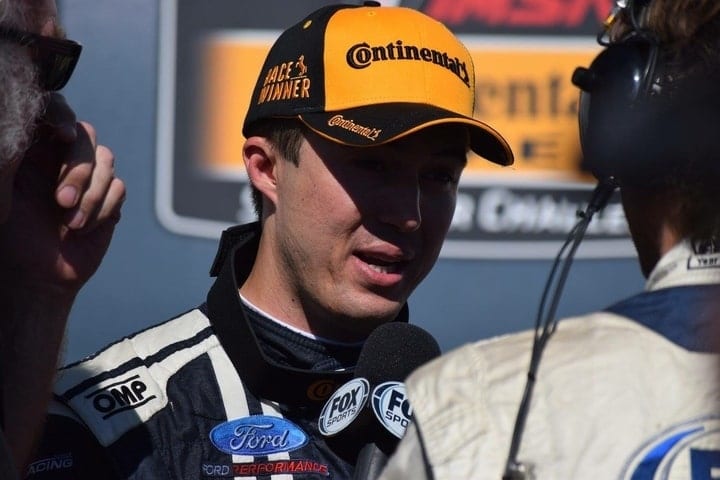 Billy Johnson’s job this upcoming weekend will be considerably shorter than his job this past weekend.

Johnson, an IMSA sportscar racer, will make his Monster Energy NASCAR Cup Series debut this weekend at Sonoma Raceway in the famed No. 43 Ford for Richard Petty Motorsports. Driving the No. 66 Ganassi Ford GT this past weekend in the 24-Hours of Le Mans, Johnson finished in 10th in the GTE-Pro class and placed 28th-place overall in the famed event.

“It is going to be awesome,” Johnson said via a team release Monday morning. “It will be my first NASCAR Cup race and to debut in the 43 car, one of the most iconic numbers to ever race in NASCAR, is a huge honor. Richard Petty Motorsports is a great organization. To have the chance to make my Cup debut for the King is surreal, and I appreciate them putting me in the car.”

Johnson isn’t new to NASCAR, though.

He has five career NASCAR XFINITY Series starts, spanning 2010-2013 and posting a career-best finish of eighth at Montreal in 2012. He also has some experience with Aric Almirola, the full-time driver of the No. 43 car. Johnson was the road course coach for Almirola at the Ford Racing School at Miller Motorsports Park

“I have run a lot of XFINITY races,” Johnson said via a team release. “But this will be my first Cup race. It is awesome that RPM and everyone at Ford Performance has the confidence in me to take on Sonoma. I have run pretty well in the XFINITY road course races I have done, so I hope that translates into a good showing this weekend.”

Johnson replaces Darrell Wallace Jr., who has been substituting for the injured Almirola. Before Wallace, Regan Smith piloted the No. 43 entry at Charlotte Motor Speedway during the Coca-Cola 600 and at Dover International Speedway. The move marks the fourth different driver in the past five races for Richard Petty Motorsports.

“We are so excited about Billy Johnson making his Cup debut,” Dave Pericak, global director of Ford Performance, said in the release. “He drove great for us in Le Mans this past weekend, has been a champion for us in the past in the GT350, and he’s been one of our development drivers for a while. To be able to put him in a Cup car, at the highest level of NASCAR, in the iconic No. 43 Fusion, and to let him show his skills at Sonoma, well, we couldn’t be happier for him to have this chance.”

The No. 43 car finished 27th in the Toyota Save-Mart 350 last season. After Sonoma, Wallace will return to pilot the No. 43 at Daytona International Speedway and will continue to do so until Almirola is able to return from his injury.

Holey heck! I’m torn between loyalties to two drivers. Billy is a road course champion I have followed for years, but only has 1 top ten in 8 attempts in NXS. Bubba, as best I can determine has 8 road course starts (6 NXS & 2 CWT) & 4 top tens. Yet, neither has run a Cup car at Noma or any other road course, so I don’t understand.
Hard to argue the logic, if no logic is present. I could rattle of 1/2 dozen others that seem more suitable (cough, JPM, cough). Heck, get Marcos on a plane m8! The “joint” owes him one BIG TIME! Hehehe…