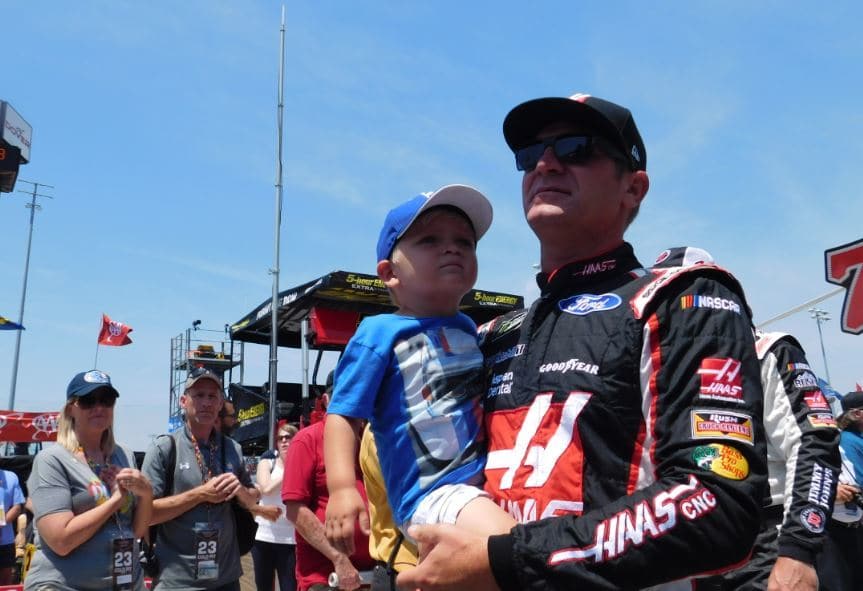 Flashback to October of 2012 at Charlotte Motor Speedway, 165 races ago, the last time Clint Bowyer visited Victory Lane in the Monster Energy NASCAR Cup Series. He did it by managing his fuel mileage, something he also did earlier in the season at Richmond International Raceway and Sonoma Raceway, where the series heads this weekend.

In each of those three races, he barely had enough fuel to make it to the Winners Circle, having to walk and claim his triumph by drinking wine in Napa Valley. But since then, a great deal has changed, personally and professionally.

2012 was Bowyer’s first season with Michael Waltrip Racing, in which he finished a career-high second in the championships standings, 39 markers behind series champion Brad Keselowski.

He went on to pilot the No. 15 Toyota for the next three seasons with MWR, finishing seventh, 19th and 16th in the point standings. But leading up to Pocono Raceway in August, 2015, Michael Waltrip announced he would shut the company’s doors, ending his 14-year tenure as an owner in the Cup Series, which left Bowyer without a ride.

Enter Tony Stewart and Stewart-Haas Racing, as the three-time series champion announced that 2016 would be his farewell tour, hand-picking Bowyer to be his replacement driver in 2017. But as far as 2016 goes, it would be the Kansas native’s toughest season to date.

Competing with HScott Motorsports, Bowyer did not record a top-10 finish until the eighth race of the season at Bristol Motor Speedway, en route to a career-low three top-10 results with a goose egg for top fives.

Moving to Stewart-Haas Racing, it had to be better.

Through 16 races this season, Bowyer has already outscored the amount of top 10s he had all of last season, with a season-high second-place finish coming at Bristol. The No. 14 car currently sits one position below the playoff cutoff, seven points behind Matt Kenseth, after finishing 26th at Michigan International Raceway last weekend.

One of the major reasons for Bowyer’s early success with SHR is the family atmosphere that starts from the top of the organization. Stewart has dedicated his life to motorsports, competing in anything and everything. Gene Haas, co-owner of SHR has put a big emphasis on overachieving, as before Stewart aligned with the Chevrolet team in 2009, Haas spent seven season struggling to make it big time in NASCARs premier series.

Bowyer respects the family atmosphere, and the chemistry between he and the team was instant.

“Fitting in is usually not my problem,” Bowyer told Frontstretch. “You’ve just got to get it down and get hammered in as we get into the summer months. This is where the grind starts and you’ve got to be able to weather the storm and be there when the times right.”

Over the past three-and-a-half seasons, Bowyer has just nine top-five finishes combined, compared to 2012 and 2013 when he had 10 each. Consistency has always been one of the strong suits for the 38-year-old, so being inconsistent is awfully unusual.

Since his last win at Charlotte, Bowyer has tied the knot, marrying his longtime significant other, Lorra Podsiadlo, in April, 2014. A few weeks after the wedding, the couple announced they were expecting their first child, which would take the NASCAR world by storm.

In early October, Cash Bowyer was born, and would soon be growing up with the baby boom that has taken over the NASCAR garage. But it came at a time in which Bowyer would have to rely on his family as his saving grace due to the on-track performance.

“I don’t know that it’s changed me a whole lot. You live your life and go about your day differently. It’s all about them and spending as much time as you can with them because before then, you had other hobbies and other things that were a priority in your life and have fun. Now, that’s all I look forward to is hanging out with them [Cash and Presley, born in December, 2016].”

Now that Bowyer is arguably in the best position of his career by taking over Stewart’s ride, the pressure to perform is on. Not just from a pride standpoint, but also to show his kids that their daddy can get it done on the race track.

Because both Cash and Presley have been born since Bowyer’s last victory, they, especially Cash have yet to see their father pick up a checkered flag. Presley, only six months old, obviously has not yet discovered racing.

“It’s probably made me more aggressive and more hungry,” Bowyer said of how having children has changed him as a racecar driver. “I want to get that little guy in Victory Lane. We’re all competitors, even if you’re born into it. He already wants to get into Victory Lane and beat up on the next guy. It’s important for me to have him see that. You want them to be proud of you and see it all.”

He admits, in true Bowyer fashion, that it’s more motivating to perform in front of his children. “Hell yeah.” And at just two years old, Cash has begun to acknowledge what racing is about.

Some of Bowyer’s peers and closest competitors have also experienced parenthood for the first time in the past handful of years. Kevin Harvick, Jamie McMurray, Kyle Busch and Brad Keselowski, among many others, are first-time fathers, which will allow Cash to grow up with friends at the race track.

“The thing is that we are all getting old,” Bowyer said. “You come into this thing, some of them are teenagers, 20-year-old kids just chasing the dream and living life. Eventually, you have to grow up and you have to have a family. Just because you’re racing, you don’t want to be that 80-year-old dad at the soccer field one day. It’s time to get going.”

A new generation of potential drivers and talent is sitting in the motor home lot on a weekly basis. The children may not know it yet, but because NASCAR is a family sport, once you’re in, it’s hard to get out.

“I think they all are friends,” he said. “It’s probably more of who the wives are friends with because that’s whose kids they hang out with. You see the girls running around and they are so cute, their dad is rich. (Jamie) McMurray’s little girl is really cute, and he’s really rich. I tell Cash, ‘if you want to hang out with them, that’s a good group to hang out with right there.'”

Racing is a family sport, and Bowyer is hoping to prove to his children that he still has what it takes to get to where he once was. The summer stretch of races are some of his best, and his main priority is ending that winless drought.

How could you write a career retrospective on Clint Bowyer and not mention his intentional spin at Richmond to manipulate the outcome of the race and chase? That’s what he will always be remembered for. To leave that out seems like you are a fan boy kissing his ass and trying to selectively only include the positives in an attempt to edit/rewrite history and make him look better.

When I hear Clint Bowyer, I think of that maneuver, but then MWR were known at cheaters.

It’s called selective journalism. It’s especially done in politic reporting. I’m so sick of seeing kids on pit road. Next thing will be all the pets, burning their paws on the hot pavement, looking for a place to relieve themselves. When are we going CB to the same standards as teammate DP.

I hope he doesn’t expect the same “caution” at Sonoma as Stewart got.