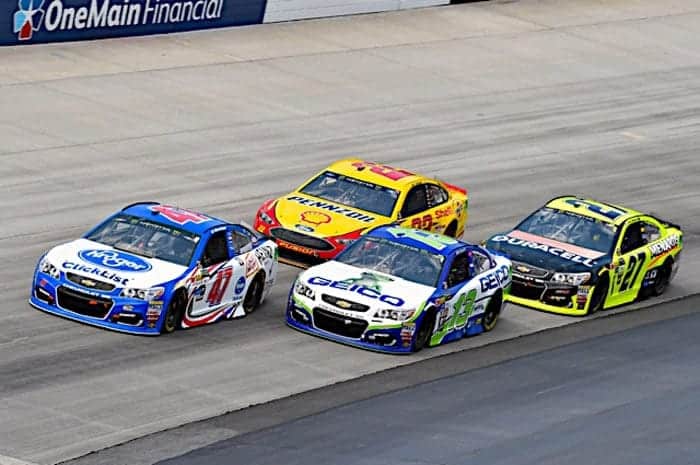 It’s hard for small teams to get noticed.  This is something that’s been discussed over and over  and continues to create a vicious cycle for these teams: Lack of money leads to lack of performance, and lack of performance makes sponsors shy away, leading to a lack of money…you see the problem here?

It’s equally difficult for broadcasters; they have to bring viewers the race at hand, and often that’s at the front of the field, where the underfunded teams are generally not. A battle for 25th is rarely as compelling as a battle for fifth, at least as a storyline. The on-track battle could be riveting, but if it’s not for a top position or a lot of points, it’s going to get overlooked…even if it’s the best race action on the track at the time.

But is there a responsibility to bring fans the whole race, not just what’s up front?  To an extent, yes, and it’s one that’s not being met.  The degree to which the broadcasting networks are failing became apparent Saturday, after the XFINITY Series race at Michigan.  The FOX team, for whatever reason, failed to interview Elliott Sadler, who had just finished the race in third place…and taken the point lead to boot.  Sadler, advocating for his sponsors and team, asked why he was overlooked and reported that he was told there wasn’t enough time left on the broadcast…despite the fact that they found time to interview Brad Keselowski, who had finished fourth (that’s behind Sadler, remember) and is ineligible for points in the series.

And Sadler drives for team owner Dale Earnhardt Jr., whose JR Motorsports is a title contending team, one of the biggest players in that series…yet Sadler was ignored for a driver deemed a bigger name by the network despite being the bigger story.

This is what the small teams face on a weekly basis.  Even if they have a great story, they’re overlooked for the bigger names, and so fans don’t get the same opportunity to know about them. And sponsors aren’t exactly jumping on board.  It’s nothing new, but Sadler’s story just illustrates the magnitude of the networks’ selectiveness—if the points leader in a different series can’t get a few moments of airtime, what chance do the little guys have on the same stage?

Top of the Class: Michigan

Michigan is a track that most small teams don’t have circled on their calendars as one where they expect a stellar performance. The combination of speed, power, and aerodynamics required to be a contender at MIS isn’t one many of these teams have access to.  It’s not just about the money, but rather about access to things like testing rigs and wind tunnels that’s the biggest detriment.  So it’s no surprise that event he best of the small teams this week weren’t flirting with the top 10 as the day came to a close.

Best on the list this week is AJ Allmendinger, which shouldn’t be a surprise—he and his No. 47 JTG Daugherty Racing team have experience and that is what must often take the place of the testing rigs and wind tunnels for these teams. Allmendinger finished 18th Sunday.  Outside of the Wood Brothers team, the Nos. 47 and 43 are probably the best in this group on a weekly basis, so that Darrell Wallace Jr. was the next driver on our list in the filed, finishing 19th, is no surprise. Richard Petty Motorsports has been a solid mid-tier team until the last year or two, and look like they’re slowly regaining their form.

Michigan isn’t easy on the top teams either, so while the teams in this section may not have had a spectacular Sunday, they raced in good company for their finishes this week.  Ty Dillon finished 20th, a solid day, and raced with more experienced drivers like Kasey Kahne for the position.  Michael McDowell also continues to put in finishes that a year or two ago were rarities for his Leavine Family Racing team, running 23rd and on the lead lap.

Ryan Blaney survived a late-race incident and more radio issues to finish 25th. Blaney has a win that should put him in the playoffs this year, but with 11 races to go before the cutoff and a slew of different winners, there is an outside chance of a race winner missing the playoffs, so Blaney and Co. do need to watch the points a little bit.

Michigan got the best of many of the teams in this group on Sunday.  Corey Lajoie finished 30th, but three laps down to Kyle Larson. Cole Whitt also finished three laps down in 31st.  Most teams did finish the race this weekend, so it wasn’t a war of attrition like Pocono, which sometimes hurts the smaller teams who are able to run to the end and outrun several others that way.  Landon Cassill was only able to get his backup car to 32nd place after a crash earlier in the weekend took his primary car out of commission. Ryan Sieg (33rd), Reed Sorenson (34th), Jeffrey Earnhardt (35th) and Chris Buescher (36th) also managed to hang on until the end Sunday, but would rather forget the weekend.

BK Racing will take just one car to Sonoma this weekend, the chartered No. 23, with Alon Day making his Cup Series debut at the road course.  Day, 25, is fresh off a win at Brand’s Hatch in the NASCAR Whelen Euro Series. He will be the first Israeli driver to compete in the Cup Series. EarthWater Limited will serve as primary sponsor.

Tommy Regan will pilot the No. 15 this weekend for Premium Motorsports in place of Reed Sorenson. The 39-year-old Regan has six starts in the Camping World Truck Series, with a career best 24th-place finish at Gateway in 2015.

Sports car racer Billy Johnson will make his Cup debut at Sonoma driving the No. 43 for Richard Petty Motorsports. Regan is a 10-year road course veteran who has made starts in the XFINITY Series with a best finish of eighth. RPM has one win at Sonoma, with Kasey Kahne in 2009.

Josh Bilicki will drive the No. 51 for Rick Ware Racing this weekend.

Ryan and his dad have been racing together for over 20 years. It's led them to the highest level of NASCAR. Happy Father's Day! pic.twitter.com/GYdlslpR96

Sometimes part of my job is more than just signing autographs, it's awkward long hugs with fans. ? pic.twitter.com/v4RmqOZ5fo

Fought hard. Learned a ton. LF didn't want to come out for any of our pit stops so any track position we had, we lost. p30 #stackinpennies pic.twitter.com/MkOCyMF1fB

That poor face when your still stuck on a plane at the wrong airport and won't let you get off. @tickles_thecat pic.twitter.com/PHs48ByLZE

It truly amazes me that so many people simply don't know how to parallel park.. like what in the world?!? How did you get your license???‍♂️

Great article I’d love to see Michael McDowell in the 10 car. That cat can drive!

Pure and simple Fox sucks, always has and will continue. Jeff does not add much with his stuttering interviews of the drivers during the race. And DW continues to be a total disaster. Wonder why ratings are down week after week? Fox can’t figure it out? Go figure. One of these years, sponsors will quit with such a low audience.