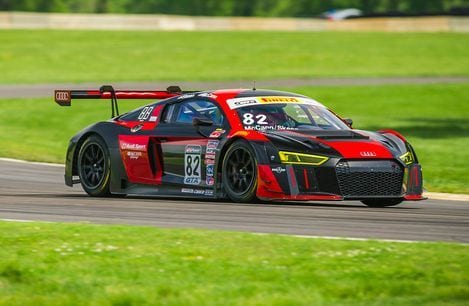 The combined races for the GT, GTA and GT Cup Classes will have 29 cars in each race.  Likely the most notable absence is R. Ferri Motorsports’ No. 61 Ferrari 488 GT3 for Alex Riberas.  The team is still repairing the chassis after Riberas had a big crash in qualifying last month at CTMP.  That crash has forced the team to miss the four Sprint-X races at CTMP and Lime Rock and ruined their season.  The team has entered their Ferrari 458 GT3 in the GTA class with Marc Muzzo driving.

Las Vegas-based Dream Racing Motorsport is entered in the GT class with Cedric Sbirrazzuoli entered in the No. 27 Lamborghini.  The team used to be full-time in the IMSA WeatherTech SportsCar Championship’s GT Daytona class, but chose to drop out after Sebring.  They have been entered for the Sprint-X races earlier this year with the No. 07, but did not compete.  The GT entry joins the already existent GT Cup No. 55, which will be driven solo this week by Yuki Harata.

McCann Racing is back for the first time since VIR in April.  Team owner Mike McCann, who was forced to sit out the races due to illness, will drive his own Audi (pictured above) in the GTA class.

GTS has 23 entries (nine in regular GTS, 14 in GTSA) and some new entries.  Ginetta is back with a vengeance.  After no Ginettas have raced since St. Petersburg in March, four are on the entry list for this weekend.  PMG Autosport has returned with their two entries for New Braunfels, Tex. residents Parker Chase and Harry Gottsacker.  The two teenagers have been racing recently in Europe and made their IMSA WeatherTech SportsCar Championship debut at COTA last month for The Racers Group.

PMG Autosport is joined by two Ginettas from Ian Lacy Racing, which is making their season debut this weekend.  Drew Staveley is in the No. 12 Ginetta, bringing experience with him from eight career starts in the Grand-AM Rolex Sports Car Series, mostly in a Pontiac GXP.R for Racers Edge Motorsports (Note: This was a racing version of the Pontiac G6 Coupe).  Staveley is joined by Frank Gannett.

PF Racing is back with Ernie Francis Jr. driving the No. 40 Ford Mustang GT4.  James Pesek is entered as well in the GTSA class, however, he’s also listed in the No. 40.  That will have to change because GTS and GTSA race together on track.

The TC class was a late addition to the weekend schedule and is not running for points.  Regardless, a small field of 10 will join the 23 GTS competitors in a race within a race.  Eight BMW M235iRs will take on two Hyundai Genesis Coupes from the GenRacer stable.