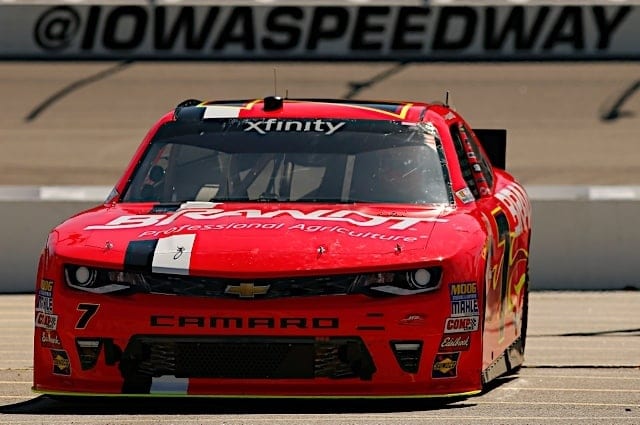 Well, I guess we’ll see. Because in place of the Cup guys are a few newer names in new places in what is one of the series’ standalone events.

In a big-opportunity race, who will rise to the top on Saturday? We’re hot off a close one at Michigan International Speedway for William Byron, who lost out by only 0.012 seconds to Cup guy Denny Hamlin. Byron won Iowa last year in the Camping World Truck Series and is one of those young kids who loves that thing called momentum.

Other young guys with momentum are the Joe Gibbs Racing duo of Christopher Bell and Kyle Benjamin. Bell finished fourth in his lone start at Charlotte Motor Speedway, while Benjamin has kicked off his career with two front-row starts and 28 laps led. Iowa could be a perfect place for either of these kids to even score a victory.

Ben Kennedy and Scott Lagasse Jr. take over for the Dillon brothers, who each compete at Sonoma Raceway on Sunday. Lagasse makes his first start for Richard Childress Racing and its No. 3, while Kennedy returns to the team for the third time.

Kennedy scored 10th in his series debut one year ago at Iowa, while Lagasse is in new air with a competitive non-plate ride. It’s anyone’s guess how they will stack up.

The final guys in top rides are Ty Majeski and Sam Hornish Jr. Majeski is a 22-year-old ARCA racer who makes his first XFINITY start for Roush Fenway Racing. Piloting the No. 60, which hasn’t raced all season, Majeski will have plenty to learn in not too much time.

Hornish is one of the more experienced guys in the field Saturday, with 167 starts in Cup and 114 in XFINITY. Though he’s making his 2017 debut in the Team Penske No. 22, Hornish won the 2016 race after leading 183 laps, also in his first start of the season. And it’s quite the sight to see Hornish back in Penske colors, the first time since his last full-time XFINITY effort in 2013.

Will Billy Johnson Lead the Way for Road Course Ringers?

A road course is pretty much the only thing we haven’t seen in the 2017 NASCAR season.

As we approach Sunday’s Toyota/Save Mart 350 at Sonoma Raceway, we also have six new additions behind the wheel in the 2017 season, more than an eighth of Sunday’s Monster Energy NASCAR Cup Series field.

Start with Boris Said, who is the only one with prior Cup experience among the season debuts, making his 53rd start in his 19th season. He will drive the No. 33 in place of Jeffrey Earnhardt at Circle Sport Racing with TMG.

Joining Said in the some of the smaller Sunday teams, Tommy Regan will make the big jump from six prior Camping World Truck Series starts to a Cup debut with Jay Robinson’s No. 55 in place of Derrike Cope. Josh Bilicki with Rick Ware Racing, Kevin O’Connell in the No. 15 and Alon Day with BK Racing are also in the same area of the field.

This will not be the case with Billy Johnson, who takes over the No. 43 at Richard Petty Motorsports in place of Aric Almirola and recent sub Darrell Wallace Jr. It is a solid racecar with a road expert behind the wheel. Though he has never raced a Cup car, there could be shades of AJ Allmendinger‘s pace when the green flag waves on Sunday. He’s the road course ringers’ best chance.

Will Winless Streak End at Iowa for Matt Crafton?

If his short, patchy post-race interview is any indication, Crafton is getting a little tired of the drought, which has held since Charlotte Motor Speedway in May 2016, more than a year.

Taking his place has been drivers like Byron, Bell and John Hunter Nemechek, who have piled up the trophies while Crafton, the series’ most experienced man, is wondering why.

Will this 25-race winless streak end in Friday’s race at Iowa Speedway? If there is a preferred place, it will happen here. After winning only once in his first 10 years of competition, Iowa saw him bring his No. 88 back to Victory Lane in 2011, though he didn’t win for another two years until Kansas Speedway in 2013.

Thankfully for the two-time champion, speed has been there in 2017. Two top-five and five top-10 finishes aren’t too bad after eight races. Remember, he led on the final lap at Daytona International Speedway before flipping in a backstretch Big One. He also led late last week at Gateway and finished second at round two at Atlanta Motor Speedway.

His main concern must be Bell and Johnny Sauter, the only two men ahead of Crafton in the driver standings. You can also throw in Chase Briscoe, who has finished second from pole in the last two races.

The days of veteran dominance by Todd Bodine, Mike Skinner and Ron Hornaday Jr. may be gone, but Crafton is still here and will be in the conversation throughout the summer.

Will Force India Step Up in Baku?

One of the highlight teams of the 2017 Formula 1 World Championship has been Force India.

After years of occasional podiums, decent points finishes and mid-pack pace, the pink liveries have seemed to make that significant step up the competition ladder year-over-year.

Sergio Perez, the team’s veteran driver, is off to the best start of his F1 career in his sixth season. With 44 points, the Mexican is seventh, only one point behind Red Bull driver Max Verstappen. In  2016, Verstappen had more than twice as many points as Perez after seven races.

Pace has also found rookie Esteban Ocon, the 20-year-old who has already scored 27 points in his first season with Force India. Kicking off the season with three straight 10th-place finishes, Ocon has stepped it up further, with a fifth at Catalunya, Spain, and a potential podium finish last time out at Montreal.

That’s where the team found its first issue on track, as Ocon caught Perez in the closing laps while on fresh tires and was not given team orders to make the pass for what was third place. After Daniel Ricciardo and Sebastian Vettel got by, the duo had to settle for fifth and sixth, respectively.

After the intense battle, the two spoke after the race and during the week, and things look just fine between the two. In fact, if the same thing happens again, the team said it is happy to let them race for position once again. Good news for the fans, as always.

But this weekend’s Azerbaijan Grand Prix at Baku City Circuit can be a place where the two pull off that podium potential in 2017. In last year’s debut race for the track, Perez scored what he called a straight on-pace podium with a third-place result.

As they reel in one of the sport’s top teams in Red Bull, a crucial step up on the constructor’s championship may be in the cards if they keep it pointing straight.