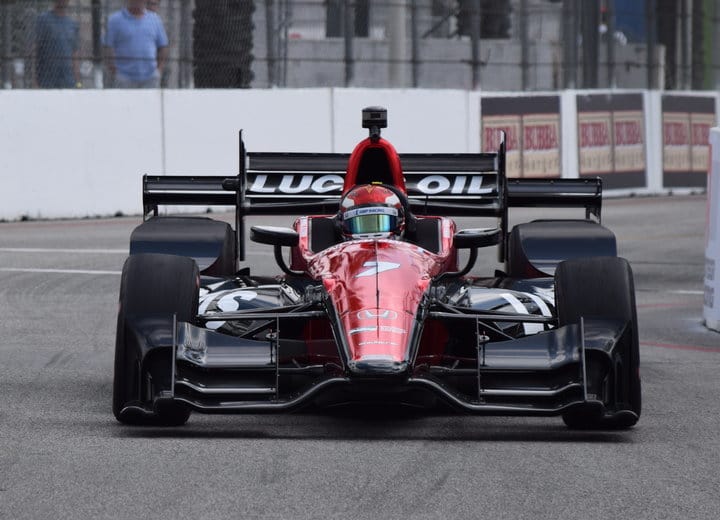 On Thursday afternoon, Schmidt Peterson Motorsports announced that their regular driver, Mikhail Aleshin, is having immigration issues.  He is trying to get to Wisconsin for this weekend’s Verizon IndyCar Series Kohler Grand Prix at Road America.  However, authorities are refusing to allow him into the United States.  As a result, he is grounded in France.

The team released an official statement detailing the situation on Twitter.

Last weekend, Aleshin competed in the 24 Hours of Le Mans alongside Victor Shaitar and Sergey Sirotkin.  After a series of issues, the Russian trio finished 16th in LMP2.

As SPM noted in their tweet, they have tapped Robert Wickens to drive the No. 7 Lucas Oil-sponsored entry for now.  Wickens is a veteran of open-wheel feeder series in Europe.  He was the 2011 Formula Renault 3.5 champion and also served as a test driver for Marussia Virgin Racing in Formula One.  He’s raced full time in DTM since 2012.  This weekend will mark the Canadian racer’s first real taste of the Verizon IndyCar Series during a race weekend.  He did participate in a car swap with James Hinchcliffe previously.

While the fact that Aleshin is Russian could come be a factor here, it is not the first time that an INDYCAR driver has had issues with visas.  Back in 2011, Switzerland’s Simona de Silvestro was forced to miss Sonoma due to U.S. Customs officials denying her entry into the country.  The officer that denied de Silvestro’s entry believed that she had been moving from country to country too quickly.  In addition, de Silvestro’s explanation that she was a professional racer fell on deaf ears.

Simon Pagenaud was tapped to drive in de Silvestro’s place.  He would finish 15th in “Porkchop,” HVM Racing’s workhorse that just so happened to be the oldest chassis in the field at the time.  The immigration issue was cleared up in time for de Silvestro to race a week later in Baltimore.

UPDATE: Aleshin’s visa issues have been settled and he has made it to Road America.  He will practice and qualify the No. 7 on Saturday and race on Sunday.  Once Aleshin arrived at the track on Saturday, he posted this video to Twitter.

In Aleshin’s place, Wickens was 20th quickest in both practice sessions on Friday.  Aleshin will get 45 minutes of practice starting at Noon today in order to prep for qualifying.  The practice session will be streamed at INDYCAR.com.