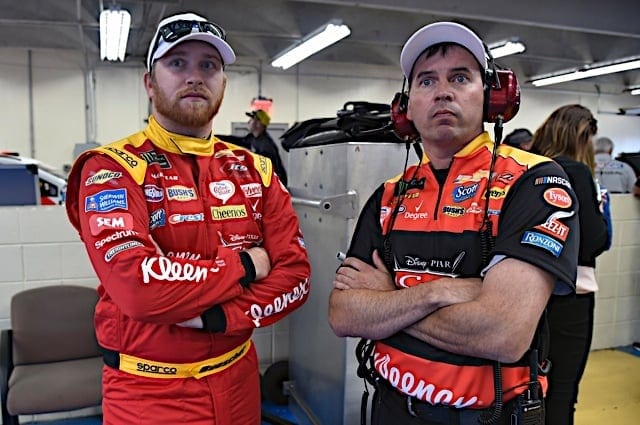 Every week of the Monster Energy NASCAR Cup Series schedule is a challenge for crew chiefs to overcome. The one who puts the pieces together the best will end up in Victory Lane most of the time, while some teams are just trying to put it together enough to make it into the top five or 10.

When it comes to road courses, that challenge changes a little bit. Some teams who don’t normally run at the front have a chance to make moves at the front and potentially break into Victory Lane. That is especially true when the teams from JTG Daugherty Racing hit a road course.

Mike Neff – Michigan International Speedway was an interesting day for sure, especially with the debris caution that flew near the end of the event. Prior to then, how did you think your day went?

Trent Owens – The day started off really good. We started 25th and drove up to 16th, so I thought we were going to have a decent day. Unfortunately, our cars lacked a little speed compared to the competition. Getting a top 20 was going to be a good weekend for us. We had an unfortunate issue late in the race where a header broke on our car. We had to pull behind the wall to make sure that it wasn’t something terminal. That kind of ruined our day.

The handling was good. We have to find some more pure speed before we head back for the second Michigan race.

Neff – Michigan was repaved five years ago. The groove still doesn’t seem like it is widening out at all. Is it just a matter of the asphalt not aging, or is it the tire NASCAR’s bringing?

Owens – We had that talk ourselves as we were driving through the tunnel. I really like that place. When it was the old surface, that was worn out and they could run three and four grooves, and that made it a lot of fun. Since they did the repave, I just think the speeds are so high, especially going into Turn 1, so the tire is some of the problem. They have to build a safe tire for that speed. I don’t envy those guys at all having to do that.

It has a lot to do with the tire. We’ve seen this at other tracks to where they have done repaves. I’m not sure how the blend of the asphalt is combined, but it is staying newer longer than what it did in the past. When they did Kentucky [Speedway] and one of the other tracks, I believe they tried to use some lime to help age the track faster and get better racing. It is definitely a formula that is strange that it has stuck around this long.

Neff – Buescher won a road course race at Road America in 2013 in a stock car. As you head to Sonoma Raceway, what has he said he wants from his race car at Sonoma?

Owens – Obviously, with our teammate being AJ Allmendinger, we’re going to mirror their setup, all of the stuff they’ve done in the past, because they have been really competitive out there. Our plan is to be within half of a second of AJ on the track with his setup. We have some things we are going to try. If they help us, they will hopefully help the No. 47 as well.

In our organization, Chris and AJ are both known as good road course racers. AJ is one of the best. It is a big weekend for our organization in general. As for myself and Chris, we’re just going to do everything we can to learn off of AJ and Ernie [Cope, crew chief] and try and come up with a strong finish for our team.

Neff – Sonoma is a more technical track than Watkins Glen International, which tends to be more high speed and open. How do you attack Sonoma differently than you do Watkins Glen?

Owens – We kind of call our Watkins Glen car our intermediate car. We treat that track with more items that we would run at many of our mile-and-a-half tracks. When we go to Sonoma, it is more of a short track setup, a really soft suspension. The rear grip in the tires goes away very quickly. There are some slow corners with some quick switchbacks, and then you have the high-speed S-curves. You get it all out in Sonoma.

It is a very different racetrack than what we experience at the Glen. The biggest thing for Sonoma is keeping rear grip, especially off of Turn 11 the last turn. They can really get into the gas good and carry a lot of speed down the front. The few times I’ve been out there already, we do the same things that we do at Martinsville [Speedway] and Richmond [International Raceway], just trying to gain rear grip and save those rear tires.

Neff – As the front end goes, are the shocks softer, stiffer? Do you try to keep that front end locked down on the track like you do on an oval?

Owens – At Sonoma we do not. We have found we can do that in qualifying and get a little more aggressive. We’ve found that the racecar needs a little release in the front end with a little weight shift to the rear tires to maintain the rear grip that it needs to continue the lap times throughout the run. When we get to Watkins Glen, we can get a lot more aggressive with attitude and frame heights to keep the nose pinned down for the aerodynamics. They are two different animals, for sure. Sonoma is a real tough balance between mechanical and aero. Last year we leaned a lot more toward the mechanical side and had some good success with it.

Neff – When you are attacking a road course with all of the accelerating and decelerating, you have to pay close attention to the brakes. Is this as big of a package as you run at Martinsville?

Owens – Yeah, the whole brake talk is somewhat self-inflicted, I feel. We have to submit to NASCAR which brake package we are going to run for the weekend by qualifying. In the past, most people didn’t know, we could qualify with one package and race with something completely different.

The teams and the brake companies have started to balance the weight with the safety factors, and I think that is why you’re seeing some of the issues. You’re having to qualify and race the same package, not the same parts but the same package. Whatever package you qualify on Friday, you have to race on Sunday.

As far as the package at Sonoma and the Glen, we take the biggest package that we have. It is the same thing we run at Martinsville, because they have to use their brakes aggressively for the entire race.

Neff – You’re getting ready to do your first-ever road course race with stages. Have you spent any extra time analyzing strategy situations for this coming weekend?

Owens – We’ve done a few scenarios. Sometimes that stuff is track position-dependent. When we break down strictly by fuel mileage, it is pretty straightforward on which laps you’ll pit. When you are leading the race, or even in the top 10, that strategy is pretty straightforward. If you find yourself, say, 20th, there may be some opportunities to get off of strategy, pit a lap sooner or make a quicker pit stop. We have to look at the falloff during practice, see what our falloff is after 10 laps and potentially pit there just to break it up a little based on the speed that we can run.

We’ve started to go through some of the scenarios. It is definitely going to be different than the races we’ve had in the past. You’re pretty much getting the guaranteed cautions that we didn’t used to have. The guys that are leading and controlling the race are probably going to stick strictly to fuel strategy like we’ve seen in the past. There may not be a lot of cars pitting at the stage breaks but more when they fall into their fuel windows.

Neff – There is more shifting at these road course races than there ever is on ovals. The rules are pretty tight on gears, especially in the rear end. Do you get to choose the ratios between gears based on driver preference, or is it dictated by the rulebook?

Owens – We have a range to work within. We do have the ability to tune some of the ratios in situations where the driver has a section of the track where they don’t want to shift and would rather carry second longer or third longer. We do have the ability with the range of adjustment that NASCAR allows us to have some changes that we can lean toward the driver. Not as much as you could five or six years ago, when it was open to whatever you wanted and you had different guys on different ratios.

NASCAR has kind of given you a list of ratios where you can work. We still have the ability to make small changes, but over time now, everyone has kind of honed in onto what ratios they need to run well at this track.

Neff – Do you change anything about the transmission as far as the cut of the gears or the thickness of the gears, since they are going to be used so much during this event?

Owens – It is definitely heavy duty. It is probably more than what we run at Charlotte [Motor Speedway], but it isn’t any more than we run at Pocono [Raceway]. The biggest thing we can do here is make sure everything starts fresh. Then, if Chris wheel hops or misses a shift during practice, we have to make a decision on whether we change that transmission since we get one change for the weekend, or wait and put the newest stuff in right before the race. We don’t go to the extreme. We pretty much trust that what G-force has is their best stuff and that it will last until the end.