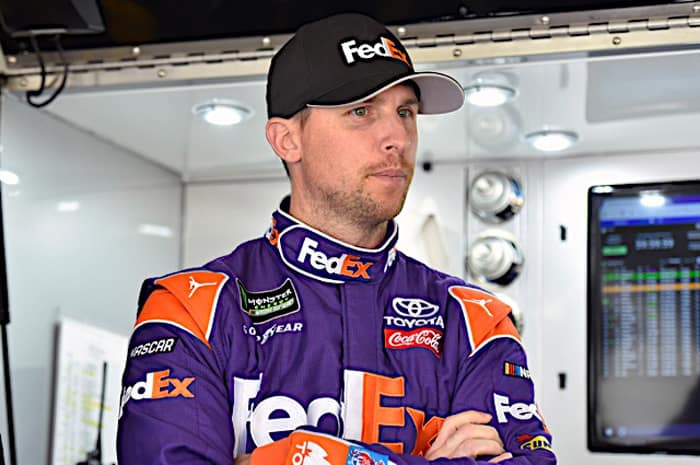 Taking Candy from a Baby – with a Bat

Denny Hamlin’s last-lap battle with William Byron to win the NASCAR XFINITY Series’ Irish Hills 250 Saturday at Michigan International Speedway, was yet another checkmark next to the growing list of reasons of why Monster Energy NASCAR Cup Series drivers competing in the lower-tier XFINITY and Camping World Truck series is not a good thing.

While it was one of the rare instances of young drivers actually getting to race and learn from a veteran of the Cup Series, the win will reflect in the record books as encumbered. Not because of something innocuous like a loose lug nut on a wheel, but rather a performance-enhancing splitter that is out of compliance.

At a track like Michigan where the entry speeds are in excess of 200 mph, you can just about guarantee that the last-turn pass for the win was aided in part by the very first thing that’s hitting the air at NASCAR’s fastest track.

The penalty? An irrelevant fine to a high-dollar team that is one of the pillars of the sport, and to a driver who is only making a handful of starts this season.

On the other end of the equation is Byron, who could have collected his first win (and only the third win by XFINITY regulars in 13 events this year) and ensured himself a spot in the playoffs this fall. His car was within spec, and he raced the winner clean to the checkered flag but is left without recourse.

With this latest rules infraction having likely dictated the outcome of the race, it brings back the age-old argument in NASCAR about wins not being taken away from drivers who fail post-race inspection, as well as the subject of penalties, even more into question.

Should all penalties carry the same fine, regardless of the size of the team or if it was a car that won or finished fifth? Of note, following Kyle Busch’s All-Star Race win that showed his car in Victory Lane with what appeared to be unsecured lug nuts, this would make the second infraction for a winning Joe Gibbs Racing car in two months with victories that were allowed to stand and not called into question.

Cup Series drivers dominating what is supposed to be a division that highlights young talent and the future faces of the sport suffers when Cup drivers are winning the races and taking up spots and sponsorship opportunities. The fact that the car that was fourth in points wasn’t there because it shuttered operations due to lack of sponsorship should be evident of that.

This latest occurrence of a Cup driver taking away a win from an XFINITY Series regular should help shape the nature of the penalties for dealing with a car that wins but is found to be out of spec – particularly when it is an established Cup driver in a car owned by their Cup team owner.

A Tale of Two Cities and Tracks

While the Cup Series cars are winding through the wine country of Sonoma, California, this weekend, the XFINITY cars will be cruising through the corn fields of Newton, Iowa, the night before. This seems to be an example of scheduling gone sideways and an opportunity to better showcase both series.

Iowa Speedway has long been viewed as the most logical location for an additional date on the Cup schedule. It’s basically a bigger Richmond International Racewaybut yet not another cookie-cutter 1.5-mile snooze button, making it a welcomed addition to the schedule, if only there were some room.

With all of the talk that started late last year of the possibility of mid-week racing being an option based on the success of the Truck Series race at Eldora Speedway, might Iowa in the middle of summer make a great addition for the Cup and XFINITY cars to hit on the way out to the West Coast?

With that said, this would also be a perfect weekend for the XFINITY cars to be racing along with their Cup cousins on a road course. Yes, I know XFINITY get its own road course race coming up at Road America  (which should also be a Cup date, but that’s another discussion to be had after a couple of other tracks lose a date or two), but there is opportunity abound here upon which the sport could capitalize.

The XFINITY cars could run before the Cup Series does at Sonoma Raceway on the same day, giving fans and the networks a doubleheader, which would be a boon for both series and a bit more useful than a pre-race show that often seems to be indistinguishable from the one the week before. With an extra three hours to play with since it’s a West Coast date and rain never being an issue there, it would make for something unique that could be promoted successfully to fans, viewers and sponsors.

Tony Stewart ignited a few silly season stories this week with his Twitter response to a fan who asked if his friend Kyle Larson would be joining him at SHR following his win at Michigan International Speedway on Sunday: “I would love to have him. You need to ask him that.”

That, coupled with Brad Keselowski’s somewhat cryptic comment of, “I hope to remain with” Team Penske, had some wondering if he would be a candidate for the No. 88 car being vacated by Dale Earnhardt Jr. at the end of the year. Keselowski was next in line to take over the No. 5 car following the 2009 season, but that changed after Mark Martin won five races in his return to full-time competition.

Larson moving to Stewart-Haas Racing would make sense simply because he was originally rumored to replace Stewart in the flagship No. 14, plus they are close friends. Rumblings continue that Danica Patrick may not return to the No. 10 next season, which would open up a seat for Larson.

Given the consistency the No. 42 team has produced this season – two wins, three poles and five second-place finishes – what would be the motivation to eject from a car that is clearly a championship contender? I’m just going out on a limb here, but I doubt that Chevrolet or Ganassi would just roll over and let Larson leave. Ganassi wouldn’t even let Jamie McMurray out of his contract to drive for Roush Fenway Racing in 2006, so you know those chances rank somewhere between slim and none.

Things have obviously worked out okay for Keselowski, the 2012 Cup Series and 2011 XFINITY Series champion, since he joined forces with Penske. With Ryan Blaney presumably at the controls of a third Penske Ford in 2018, there’s really little reason for Keselowski to jump ship. The team is recruiting additional resources it hasn’t had in almost a decade. When it was a two-car Dodge program – and essentially the only Dodge team running – with a revolving driver lineup in the No. 22 team car in 2012, the No. 2 won the championship, going head to head with Jimmie Johnson and the No. 48 team and prevailing.

In short, don’t expect Ford and Chevrolet’s best threats to win a championship this year to go wandering off the reservation to the other camp’s team. If anything each driver might have a little negotiating power, but each one is clearly in the best position they should be to win races and championships at the moment.

There was a time when cupper-exhibitions was helpful to Nascar & about tutelage. That was the 70’s & 80’s. Now is NOT then! Now, with go-carting & virtual-reality sim-games, 15 & 16 year olds come to Nascar tracks with practically as much experience as 25 year olds did back then. Now, & for decades, exhibitionism is about the big conglomerated corporate teams getting bigger. It is a big, & essentially the only big reason I have never & will never pay to go to a CWT or NXS event. And make no mistake! Nascar continues to stand in the control tower & does nothing but enable & promote it.
First of all, teams that field exhibitionists should NOT get owners’ points! And the “term of the limits” should be TWO years, not five (KyLar/ADill). Furthermore, & I fail to see the difference between running a jazzed up splitter & running a V10 motor. It is 100% INTENTIONAL! I don’t care if we’re talking about non-conforming splitters or ride height or windshield tear-offs, teams that field exhibitionists AND field intentionally non-homologated cars should be indefinitely suspended from competition! It is an INTOLERABLE abomination that occurs practically every weekend. I hardly pay attention to CWT & NXS anymore, because of “chases” & “stages”, & what little interest I have gets obliterated by “exhibitionists.” Let alone the convulsively nauseating anomaly of CHEATING exhibitionist!
What’s more? “Hisense” is a Chinese “stated owned” communist conglomerate. So, only in taking 3 steps back to get a panoramic view do you see the truly vulgar landscape in totality. Nascar subsidizing JGR’s CHEATING EHIBITIONISTS off the backs of forced child slave labor! God Bless American, bc we’re gonna need it!