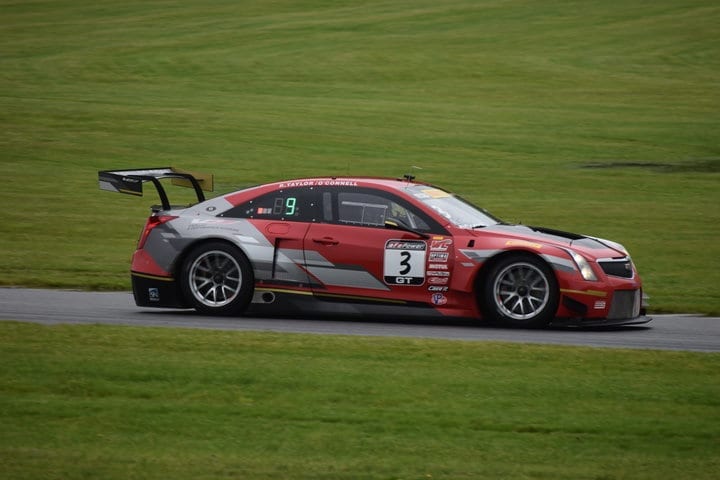 On Thursday and Friday, Pirelli World Challenge teams took to the 4.0479-mile course at Road America for two practice sessions.  Due to weather, the sessions were wildly different.

Thursday’s practice session was held in damp conditions.  The Pirelli rain tires had to come into play.  As a result, times were much slower than normal.  Magnus Racing’s Pierre Kaffer was fastest overall, but with a lap of 143.130 seconds (101.813 mph).  That lap was nearly eight-tenths of a second faster than K-PAX Racing’s Àlvaro Parente in the No. 9 McLaren.  Absolute Racing’s Adderly Fong was third, followed by CRP Racing’s Ryan Dalziel.  MCC Motorsports’ Alexandre Negrao was fifth quickest in the No. 92 Mercedes.

Friday afternoon saw much drier conditions at Road America.  As a result, the teams were able to put their best foot forward.  Cadillac Racing’s Johnny O’Connell was fastest overall with a lap of 125.326 seconds (116.276 mph), more than 20 seconds faster than the time O’Connell posted in the wet on Friday.

O’Connell was just over a half-second faster than Wright Motorsports’ Patrick Long in the No. 58 Porsche.  GAINSCO/Bob Stallings Racing’s Jon Fogarty was third quickest in another Porsche, followed by Peter Kox in the No. 93 RealTime Racing Acura.  Fong was fifth quickest.

In GTA, Schein and the No. 16 team decided to sit the session out.  As a result, that opened things up a little.  Magnus Racing owner-driver John Potter was fastest with a lap of 128.109 seconds (113.750 mph), good enough for 15th overall.  Potter’s lap was six-tenths of a second faster than Sofronas in second.  K-PAX Racing’s Mike Hedlund was third quickest, followed by Pappas and McCann Racing’s Mike McCann.