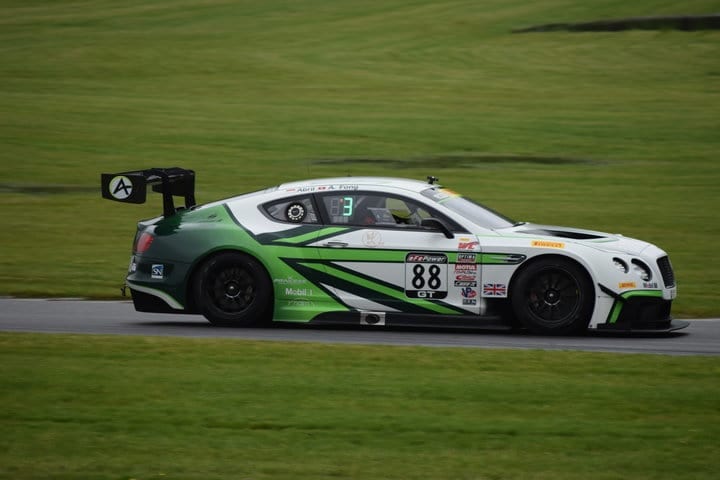 GAINSCO/Bob Stallings Racing’s Jon Fogarty will start third with the fastest Porsche in the field.  Wright Motorsports’ Patrick Long and TR3 Racing’s Daniel Mancinelli round out the top five.

In GTA, GMG Racing’s James Sofronas was fastest with a lap of 126.722 seconds (114.995 mph), good enough for 14th on the grid.  Sofronas was more than half a second faster than Black Swan Racing’s Tim Pappas.  Magnus Racing’s John Potter was third in the subclass, followed by Mike McCann and Dr. Preston Calvert.  With points leader Michael Schein sitting the race out, it is an opportunity to make up points.

GT Cup will have Dream Racing Motorsport’s Yuki Harata starting on the pole.  The other entries in the class did not set times during the session.

In GTS, Team Panoz Racing’s Ian James put the Panoz Avezzano GT on the class pole with a lap of 137.915 seconds (105.662 mph).  James’ lap was just three-hundredths of a second faster than PF Racing’s Ernie Francis Jr. in the No. 40 Ford Mustang GT4.  Jeff Courtney will start third in the best of the Maseratis.  Martin Barkey will start fourth in class in his Mantella Autosport KTM, while points leader Lawson Aschenbach will start fifth.

Austin Versteeg, last year’s IMSA Prototype Lites champion, won the GTSA subclass pole with a lap of 138.495 seconds (105.220 mph).  This lap was good enough for fourth overall in GTS with his ANSA Motorsports KTM X-Bow GT4.  Versteeg was roughly two-thirds of a second faster than JCR Motorsports’ Fred Roberts in the second Maserati.  GMG Racing’s George Kurtz will start third in GTSA, followed by Keith Jensen in the NOLAsport Porsche.  Cameron Cassels in the No. 018 Case-It Porsche was fifth in class.

Finally, in the invitational TC class, the class is dominated by the BMW M235iR.  However, the non-BMW’s reigned supreme.

RacerInk International’s Cody Ellsworth won the pole in the lone Porsche Cayman in action.  Ellsworth’s renumbered No. 111 turned a lap of 146.309 seconds (99.600 mph), .072 of a second faster than Nicholas Barbato in the No. 75 Genesis Coupe.  Jeff Ricca in the second Genesis Coup will start third in TC.  Nick Wittmer in the ST Racing No. 91 will start fourth, fastest of the BMW’s.  Defending TC champion Toby Grahovec will start fifth.