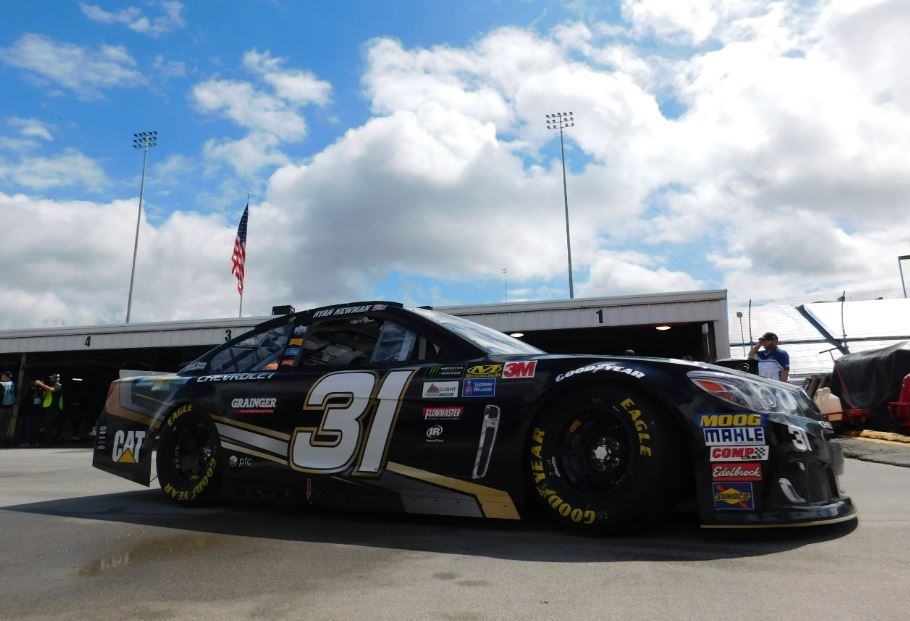 The Monster Energy NASCAR Cup Series heads to Sonoma Raceway for the Toyota Save Mart 350 this Sunday afternoon at 3:00 p.m. Cars hit the track on Friday at 3:00 p.m. for first practice, and then at 2:45 p.m. on Saturday for Coors Light Pole Qualifying.

This week’s fantasy forecast is backed by DraftKings, the No. 1 platform for daily fantasy sports. You can jump in on all of the daily fantasy NASCAR action at Sonoma by signing up here for a free entry into one of this weekend’s contests. All you have to do is make a $5 deposit to get started!

Martin won the first two stages of the race last weekend at Michigan, but ultimately came up short during the final stage, finishing sixth. He slipped back to second in series points, settling in behind race winner Kyle Larson. Those two have been swapping positions all season long.

Truex won this race in his final season with Michael Waltrip Racing back in 2013. During that win he led 51 of the 110 laps. Last season, Martin finished fifth after starting from the second row, his second top five in 11 races.

Truex was impressive on the two road courses last season, and has a chance to pick up his second career win at Sonoma on Sunday.

Kyle is the only active driver with more than one career win at Sonoma. His last win here came two seasons ago in 2015 when led 17 laps and climbed through the field from the 11th position. Busch has led laps in the last two Sonoma races and finished seventh last season.

Kyle is still looking for that ever elusive first of the 2017 season. He has led laps in seven straight races heading into Sonoma, and was in prime position to win last week. The call by interim Crew Chief Ben Beshore to stay out on old tires during a late caution ultimately proved to be the nail in the coffin.

Busch has five top 10 finishes in the past six races, and is running as good as possible without winning. Luckily for us, winning isn’t everything when it comes to DraftKings. All we need is another strong run on Sunday.

Allmendinger is the resident “road course specialist” in the Monster Energy Series. His lone MENCS win came at Watkins Glen in 2014, and he has two Xfinity Series wins in 10 career starts, both at road courses. He also made six IndyCar starts in 2013.

When it comes to Sonoma, AJ has underwhelmed regarding his finishing position, even though he has been the favorite for the past three seasons. He has three straight front row starts, including the pole in 2015. In 2014 and 2015, he finished the race in 37th, after leading 36 laps between the two races.

Allmendinger finished 14th last season. He started the race strong and was aggressive in taking the lead early, and led 20 laps. As the race went on, he fell back through the pack. If AJ can remain aggressive, but conserve himself throughout, he could be yet another different winner on the 2017 season.

Bowyer was making a run at a top 10 finish last week when the caution flag flew for debris with 21 laps to go. After the ensuing restart, Bowyer hit the wall and ended any chance he had at a good finish. The result meant that for the second time in three races that he failed to crack the top 25.

Before an electrical issue just five laps into last season’s Sonoma race, Bowyer had a five race top-10 streak, which included a win in 2012. He has a series best 11.5 average finish position through 11 starts here. Clint has mastered this track and now that he is back in top equipment, he will go into this weekend expecting a win.

Bowyer’s DraftKings salary was $6,800 last week, and even after the 26th place finish, his salary is up to $9,400 for Sonoma. That is a testament to just how great he is on this track.

Last season, Hamlin was king at the two road courses. He finished runner up to Tony Stewart in this race after Stewart gave him a “love tap” on the last lap to secure the win. Later in the season, Hamlin picked up the win at Watkins Glen.

Hamlin has not fared well historically at Sonoma, but he has improved over the past two seasons. Prior to 2015, He had a five race streak of finishes of 23rd or worse. Since then, he has finished 18th, and then the aforementioned second place finish.

McMurray is another driver who has a sports car background, which comes in handy during the MENCS road events. He has a Weathertech SportsCar Championship series win under his belt, as well as a podium finish in the Rolex Grand-Am Sports Car Series. Both of those events were held at Daytona.

At Sonoma, he has two top-five finishes in 14 starts. The latest came in 2014 when he finished fourth after starting from the pole. He led nine laps in that race.

McMurray has been one of the most consistent drivers this season, He has an average finish of 13.4, which ranks seventh among all series regulars. He is also tied for third with nine top-10 finishes.

Over the past four seasons, Kahne has four straight top-10 finishes at Sonoma. In all four of those races, Kahne started 15th or worse. Positive position differential is the one stat to hope for with Kahne, since he has not been running up front with consistency over the past few seasons.

While Kahne’s average finish at Sonoma is 17.5 for his career, over the past eight races, that number is a much better 8.5. He had six top-10 finishes within that span, including a win in 2009.

It’s understandable to be hesitant when looking at Kahne for a middle of the road driver, but his resume at Sonoma cannot be ignored.

Newman sits in second behind Bowyer in average finishing position at Sonoma with a mark of 12.3. While he doesn’t have a win at the track, he does have seven top-10 finishes in 15 starts. He finished eighth in 2016 and ninth in 2015.

Newman is currently riding a four race top-15 streak, which includes a fourth place finish at Dover three weeks ago.

Over the past four Sonoma races, Menard has an average finish of 12th. He set a career high with a fifth place finish in 2014. Menard led three laps early in the race last season, but tapered off after, which resulted in a finishing position of 16th, his worst finish in four races.

If Menard can continue to finish around the 12th spot, that will be more than enough from a back end of the roster type driver. In three of the past four races, he finished higher than his starting spot. If Menard has a tough day of qualifying, he will deserve a look for Sunday. 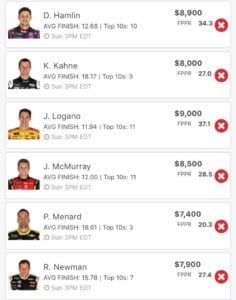