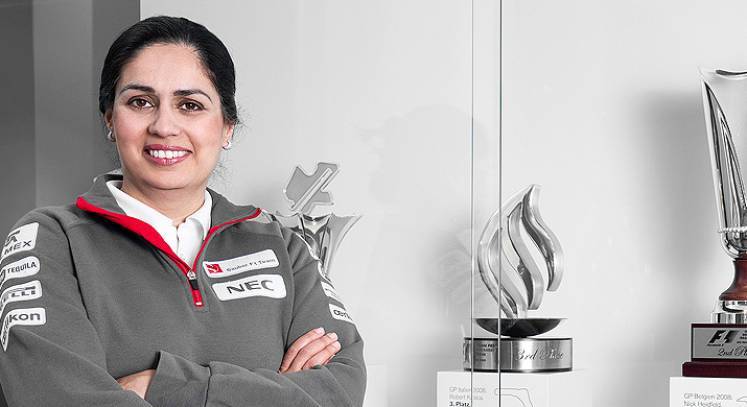 The first female team boss in F1 split with her organization this week in what came as a surprising move.  Monisha Kaltenborn began her involvement with F1 beginning around 2000 when the company for which she worked, the Fritz Kaiser Group, joined the sport backing the then BMW team.  As principal players in the structure started moving out the sport, Kaltenborn was able to purchase their shares, and when BMW ended their factory support, she became the CEO of the independent Sauber outfit in 2010.

In 2012, Peter Sauber retired from the team and handed over control to Kaltenborn.  As a second-tier organization, Kaltenborn has done her best to keep the company afloat but the team’s results have remained fair to middling.  Consider that the team has just one win since its inception in 1993 and there is a case to be made that perhaps expectations and results are just where they should be.

What may be prompting Kaltenborn’s departure is Longbow Financial’s takeover of the team in 2016.  With the new monied support the likelihood that a better return may be one of the things that has led to what has been described as an amicable parting.  That may or may not be the case but one rumor that has also circulated is that Longbow, which has Swiss roots, has been looking for the team to favor Swiss driver Marcus Ericsson.

While that rumor may hold some element of truth, the fact is that neither driver has done anything this year of significance, as Pascal Wehrlein sits 14th and Ericsson is positioned in 18th.

The truth is that Kaltenborn may have been smart to resign her position a year ago and move to a different position with the team.  She held the position for a decent stretch but the team has been flailing for the last few years and a change in leadership may have benefited all parties, from technical moves, to driver performance, to sponsorship appeasement.  That doesn’t mean the Kaltenborn wasn’t an influential and important part of the F1 grid and her presence won’t be missed.  What will be interesting to watch is both what Kaltenborn may do next and who will succeed her.

– Carlos Sainz Jr. will face a three-spot grid penalty for the race on Sunday.  He received the punishment for his first lap incident at the Canadian GP when he drove into Haas F1 driver Romain Grosjean then wrecked into Williams’ Felipe Massa.  The move looked reckless and collecting Massa was unfortunate, but Sainz also endured a DNF and did not look to be doing anything malicious.

All of this story seems like nothing worthy of criticism, but the Toro Rosso driver has faced further questions and some wondered if he shouldn’t have been banned for a race due to this incident.  Sainz, to his credit, stated that such punishment would be ‘ungentlemanly’ which is kind of a comical way to describe such an idea.  But perhaps more than just a 3-spot penalty would have been appropriate.

– Pascal Wehrlein, Marcus Ericsson, Fernando Alonso, Sebastian Vettel, and Lewis Hamilton all ran off during the practice sessions, and there’s a strong likelihood that more drivers will follow through both FP3 and qualifying.  The move is a smart one rather than testing the integrity of the cars by driving them into the wall but highlights the difficulty of the track, or perhaps how the changes in this year’s car have made the course more difficult.

In addition, a number of drivers have clipped the walls, some leaving a trail of light wall debris while Sergio Perez ended his time in FP1 after contact with the wall, and Jolyon Palmer doing the same in FP2.  Some of these moves are, of course, the drivers testing the limits and is reminiscent of the introduction to the course last year.  The oddity is that when the race lights went out a change swept over the field and the race went green for the duration.

– Stop if you’ve read this one before: Fernando Alonso says that he could walk away from McLaren if they don’t become more competitive.  McLaren then says that if Honda doesn’t show improvement that they’ll be switching engine companies.  Honda then says that upgrades are coming, and even seen as they put a new ‘spec 3’ engine in Alonso’s car for FP2.  And then, of course, Alonso winds up parking his car due to some mechanical failure.

This time the gearbox is what gave way and that’s not necessarily in Honda’s control.  And the results from using the spec 3 engine were good as the car showed improved speed, which has been the real issue.  With Alonso and teammate Stoffel Vandoorne starting from the rear of the field because of grid-place penalties due to powerplant changes, Honda has decided to use the spec 2 engine so  because they question the reliability of the spec 3.  They also wish to further test the new engine.  At this point, however, wouldn’t racing the engine be the best test they could give it – they’ve got nothing to lose?

– One goofy rumbling has been that Lewis Hamilton may retire at the end of the season.  Sure he will.  Also likely to happen is that everyone with the letter T in their name will suddenly find a Ferrari parked in their space and a note saying ‘enjoy your new car’.  Hamilton’s comment this week, however, is easy to be looked at in a couple of ways.

Some may say that the grind of contemporary F1 encourages burnout, exemplified by Hamilton’s former teammate Nico Rosberg.  Critics may find this fuel for their fire by noting that now that Hamilton is being challenged by Vettel and Ferrari that Hamilton doesn’t have the mettle to engage in such a title fight.  Then there’s others that may just be happy to see him gone as he has been a lightning rod for criticism.  Wherever you may align yourself, the grid is more entertaining with Hamilton driving, though it’s likely he’d never suffer through driving for a second-tier organization.

Last year the race in Baku held the title of European Grand Prix, but this year it has been changed to be the Azerbaijan GP.   It is one of the few street circuits on the schedule and features some rather interesting environs as the cars whip through, notable what looks almost like a castle turret around turn 8.  The track features 20 turns, and a distance of 3.73 miles, making it the second longest track of the F1 calendar.  It is a mix of both the old city and the more modernized one, making it a track of two halves.  Last year the race ran caution free with Nico Rosberg earning the win.

The departure of Kalterborn was evidently a surprise to the entire F1 world. And it is true that Sauber has apparently declined on her watch. Only a last minute finish in the points allowed them to beat Manor in the constructors standings last year.

At Baku the FIA is tightening up on the use of oil burn to improve power. The speculation of course being that teams (hint: ferrari/Mercedes) might be doing that as a way to get around the engine rules. From qualifying results it doesn’t appear to have changed things much.

For me the surprise of the week was to find that Ross Brawn had purchased the equipment from the defunct Manor team. And the question of course is why? Particuarly given his position with Liberty Media.

Marcus Ericsson is Swedish, not Swiss – there goes another conspiracy theory…