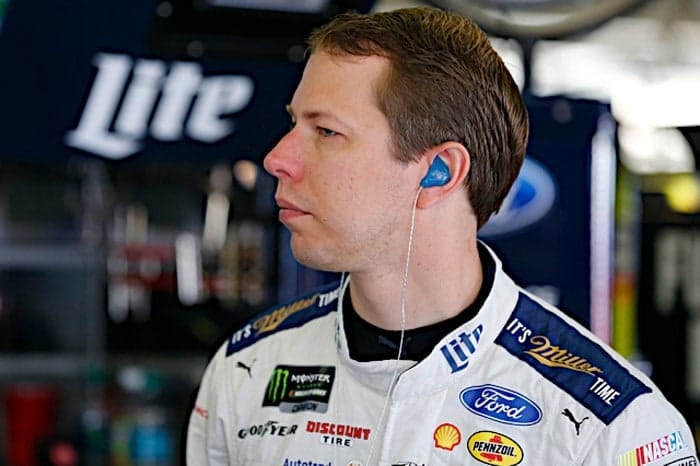 Brad Keselowski used a strategy play of staying out longer than anybody else during the last green flag run to wind up with his best career finish of third at Sonoma Raceway in the Toyota/Save Mart 350 on Sunday afternoon. A fast racecar didn’t hurt the 2012 Monster Energy Cup champion’s performance, either.

“We had a really fast Elite Support Freightliner Ford,” Keselowski said in the media center following his top-five result. “And when you have a car that great, you really just enjoy every moment. It was a day I really enjoyed. I had a slip-up there and got into Clint (Bowyer) and that really stank. But other than that, an incredible race car and really fun to drive.”

In his career on road courses, Keselowski has been hot and cold. He has five top-10 finishes and four top fives at Watkins Glen International. But at Sonoma, he scored his first top five and second top-10 finish this Sunday. Entering the race, his best career finish at Sonoma was 10th in 2011.

The No. 2 Team Penske driver led 17 laps in the third and final stage. He stayed out with a handful of drivers, but was the last to pit under green flag conditions in that particular cycle. On older tires than everyone else, eventual race winner Kevin Harvick ate up the 10-second advantage Keselowski had and bypassed him.

“It looked like it was putting us behind, but we had such a strong long run car that it played back out for us, which was great,” Keselowski said of the strategy call. “In fact, I think we were hoping to catch a yellow and didn’t catch it. If we would’ve, I think it would’ve been the race winning move. But still, all in all a great day for us.”

Brian Wilson was atop the pit box for Keselowski on Sunday. His usual crew chief, Paul Wolfe, stayed home in the Charlotte area with his wife to attend the birth of their second child. Wilson has now had finishes of second, third, third and fourth in four races calling the shots for Keselowski this season.

“It’s tough,” Keselowski said of running with old tires for so long. “But this is the big leagues, and it’s not supposed to be easy to drive. The cars are incredibly difficult to drive, but that’s part of what makes it fun and how it should be.”