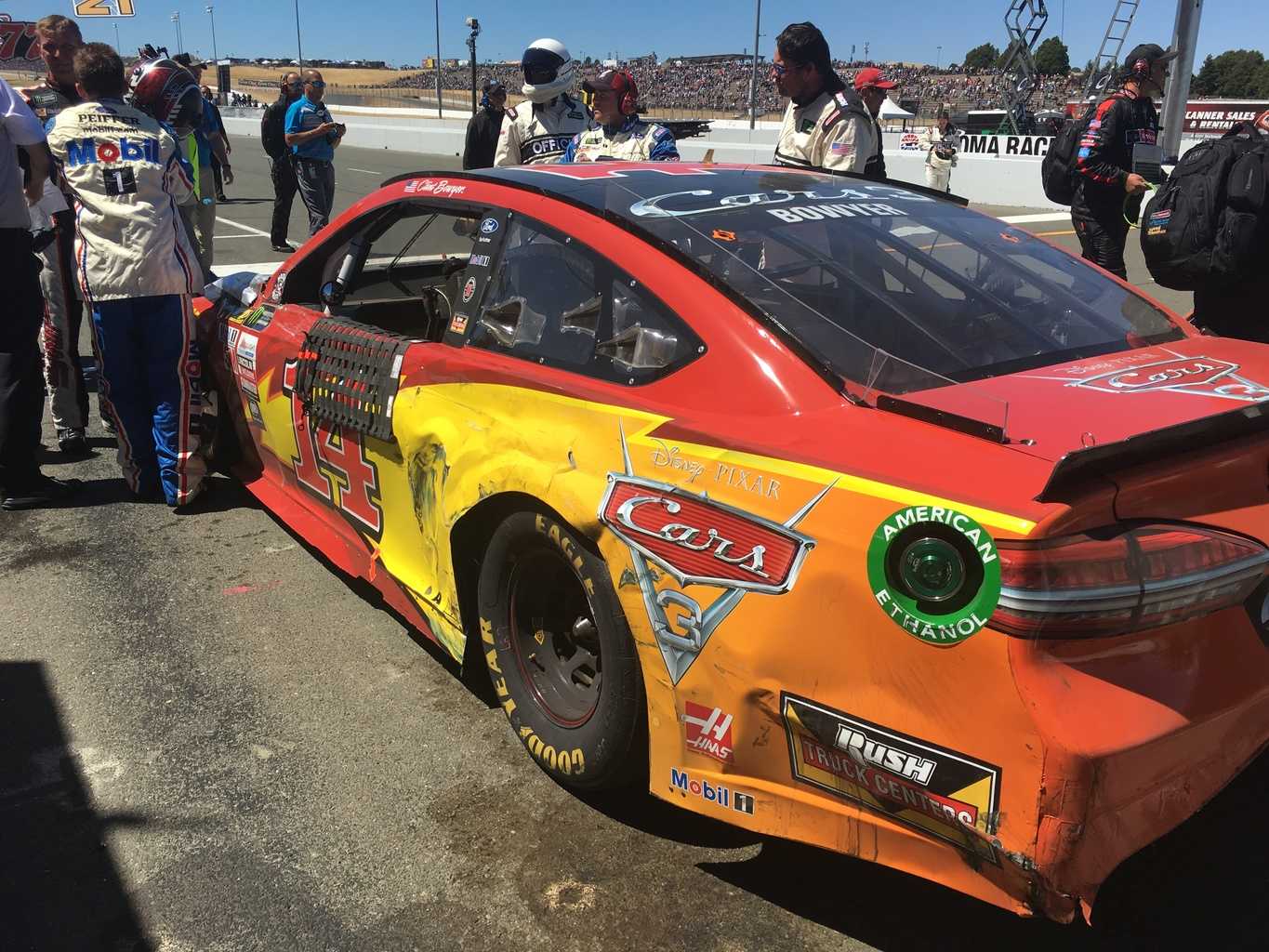 Clint Bowyer grew up in the heart of Kansas, racing on dirt. But somehow, some way, he’s turned himself into a great road course racer in the Monster Energy NASCAR Cup Series.

Bowyer brought his Cars 3 Ford home in second place behind Stewart-Haas Racing teammate Kevin Harvick, completing a 1-2 sweep for SHR in the Toyota/Save Mart 350 from Sonoma Raceway Sunday afternoon. And he did it after overcoming a pit road speeding penalty on Lap 54 as well as battling a beaten and battered race car.

“Well let’s face it: short runs have never been my strong suit here,” Bowyer said post-race. “The long runs are, and thank God we got a long run there [at the end of the race]. Hell, I was out of tires when I got done tearing the hell out of my car.

“Those stages […] obviously it’s the first crack at it [at a road course]. That’s what lends to torn up racecars. It’s just some technical strategy that you gotta try to play and get track position. And all of a sudden, you’re on the bad side of tires trying to hold on, and you’re blocking (them) and they’re stacked up behind you. It’s a recipe for disaster.”

The finish was Bowyer’s ninth top 10 in 12 career races at the 1.99-mile, 12-turn road course and is his sixth top 10 of the 2017 season. He earned three top 10s all of last season with the now defunct HScott Motorsports.

“The No. 47 car (AJ Allmendinger) down there, I just didn’t see him and knocked the whole front end off our car,” Bowyer said of contact between the two drivers early in the race. “And somebody else I had a really good run on and I thought they were gonna give it to me, and they didn’t. And Brad (Keselowski) spun me out. Yeah, one of those days.”

The damage on the No. 14 Ford proved to be costly in some sections of the racetrack.

Sonoma isn’t as aerodymanic-dependent of a track as an intermediate track or superspeedway, but the aerodynamics still matter in the high-speed sections of the Northern California course.

“When [the damage] was really flaring and there was a big hole in it, [the car] was plowing terribly bad in the high speed stuff. It’s just patience, trying to take care of my stuff. Thank God I got that long run and I was able to lean on my expertise here. Babying it, not spinning the tires and being good on the back end of a run.”

Bowyer currently occupies one of the final two spots when it comes to the championship picture. With another new winner this season occurring this weekend, spots are filling up. And Bowyer knows that it’s getting to be “now or never” for him and his team.

“Let’s face it: We gotta win,” Bowyer explained post-race. “We need to win in a big way. Today would’ve been a great win, but after everything that happened to us, to gets second place is really good.”