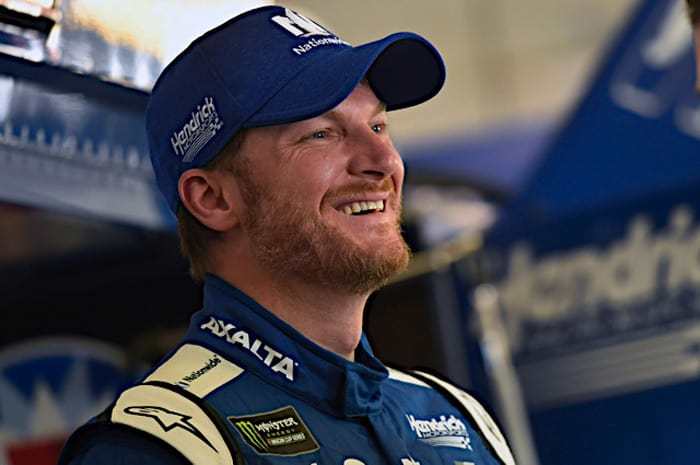 ONE: Dale Jr. to the FOX Booth?

I want to start out by saying I have nothing but love and respect for old DW. Sure, his boogity boogity nonsense drives me a tad insane but the three-time champion, 84-time race winner and Hall of Famer has achieved more in his NASCAR career than all but the very, very best. And by that, I mean the likes of Richard Petty, Junior Johnson and David Pearson.

But it seems to me the time has come to move Waltrip out of the race day broadcast booth and into a different role. Perhaps that could be more on the long-form interview side, for example, with in-depth discussions (extended into digital and social) with a wide range of NASCAR drivers, team members and more.

I’d replace him with Dale Earnhardt Jr. who would be the perfect foil to his old buddy and teammate Jeff Gordon. It would bring a fresh and massively popular face to a role that is crucial in attracting new fans and keeping current fans interested and informed. We’ve seen Junior in the booth on a couple occasions in the last few years and each time he has acquitted himself very well. My guess is he’d take to a half-season of broadcasting like the proverbial duck to water. Simply put, NASCAR needs to be as relevant as possible to the Millennial audience and while Junior doesn’t quite fit into that demographic, he would be a perfect bridge not least given the size of his Twitter platform and his frequency (and humor) of posting. I’ve read reports that Junior has been in discussions with the two primary broadcast networks so I might be way late to this party already but I, for one, hope to see him installed alongside Gordon for the 2018 Daytona 500.

As the laps to go counter clicked into single digits, I walked down pit road at Sonoma Raceway to stand by Kevin Harvick’s pit box. I wasn’t the only one who was thinking this, and as the lap counter hit three to go the throng grew ever larger. Perhaps unsurprisingly, the crew looked calm and unconcerned. This is a team that is used to winning.

For the veteran Harvick, it was win number 36 at the Cup level, and no one except Jimmie Johnson has won more races in the last decade. In his post-race media interview, Harvick mentioned that he had “mixed emotions” as to how this season was going to play out especially with the change from Chevy to Ford power plants for Stewart-Haas Racing. “I felt like I knew we were going to win again,” said Harvick, “just for the fact that our cars were running good. Pocono and Michigan, our cars were fast the last couple weeks, and all weekend here this weekend our cars have been good. It’s been a good year, we just hadn’t been to Victory Lane, and today it all went our way, and hopefully we’ve gotten all that bad luck out of the way and we can enjoy days like this where it all goes our way and capitalize on the fastest car.” And if he has got the bad luck out of the way that’s a worrying sign for the rest of the field. Expect more wins to come from Harvick especially now his playoff berth is rubber stamped.

As I mentioned in last week’s column, I was pretty excited to get out to the track for my first in-person race since the Daytona 500. We arrived really early and parked up in the hills above the track right by the helicopter landing pad. As we were walking to the shuttle to take us down the hill, I saw a gentleman wearing an ALON DAY RACING cap. Now for those who missed the news or didn’t watch the race, Alon Day is a 25-year old, road race specialist and the first driver from Israel to compete at the top level in NASCAR – quite an accomplishment and one that even the New York Times wrote a column on. For the record, Day drove the #23 BK Racing entry at Sonoma on a one-race basis. As is my wont I of course talked to the gentleman in the cap, wishing him the best for the race. And then I asked him how he was a fan of Alon. He looked at me proudly and said: “Because I am his father.” It was a pretty cool moment; I must say. Now, the race itself didn’t end up that well for Day, with crash damage relegating him to a 32nd place finish but my guess and hope is he’ll get another shot.

FOUR: Next Up, Daytona

Next up on the schedule is the traditional Fourth of July 400-miler on the high banks of the World Center of Racing — Daytona International Speedway. This will be the 141st race at the two-and-a-mile circuit, a remarkable record that runs all the way back to 1959. And with just 10 races remaining until the Chase and 10 winners having already secured their playoff berths, this wild card of a race gives a new name the chance to stake their spot in NASCAR’s post season. It feels almost glib to refer to this race as a wild card but the truth is that’s exactly what it is. One driver who might be more fired up that most is Dale Earnhardt, Jr., who will be desperate for a win as his 19-year, 611 race and counting top echelon career starts to wind down. At Sonoma this past weekend, I asked several Junior fans who they would root for next year and there really wasn’t a consensus. Many were just not ready to make that decision yet and if there was one name that came up more than others it was Kyle Larson. Now of course there’s some geographical bias since the Chip Ganassi Racing youngster was born in (relatively) nearby Elk Grove, California. As ever though, Daytona is a great race to watch; one where every lap can make a difference. And for me, it’s appointment viewing this Saturday evening. Let’s hope my lovely wife hasn’t made other plans.

FIVE: A Great Day Out at the Track

And finally, this week, a quick word on an excellent day out at my local track of Sonoma Raceway. Mercifully for me, the weather took a while to heat up and for the first few hours it was very overcast. As a very pale, almost translucent, British person, I had lathered up with copious quantities of SPF 100; I learned my lesson in the past at NASCAR races when I brought a whole new meaning to the term “red neck” — red everything more like). But in the end, it was a beautiful day and I didn’t get burned so we’ll chalk that one up in the win column. This was my fourth Cup race at the track, and each time I’m impressed by how well organized the event is and how friendly and helpful all the staff and volunteers are. And as ever, the racing was compelling and fun to watch. So, thanks to everyone at Sonoma Raceway and my trusty race day companions Alvin and Ryan. I’m already looking forward to next year.

You must live under a rock! Jr. will be driving in the 2018 Daytona race!

@JE Smith not sure I agree with that — Here’s what Junior said a few days ago:

“Well, you never say never,” Earnhardt said via the NASCAR wire service. “I’m just retiring from full-time racing. I’m going to run some XFINITY races next year. I don’t know that I won’t ever run the Daytona 500 again, if the right deal comes along. All these tracks you have memories at, all of them, Daytona included.

Not all that long ago it was brutal listening to Junior being interviewed. Although he seems to have come a long way it’s still pretty painful listening to him. Just can’t imagine him being very good in the booth. He does do well in his commercials, so maybe there is hope.

Can you guess who will get the special plate this weekend?