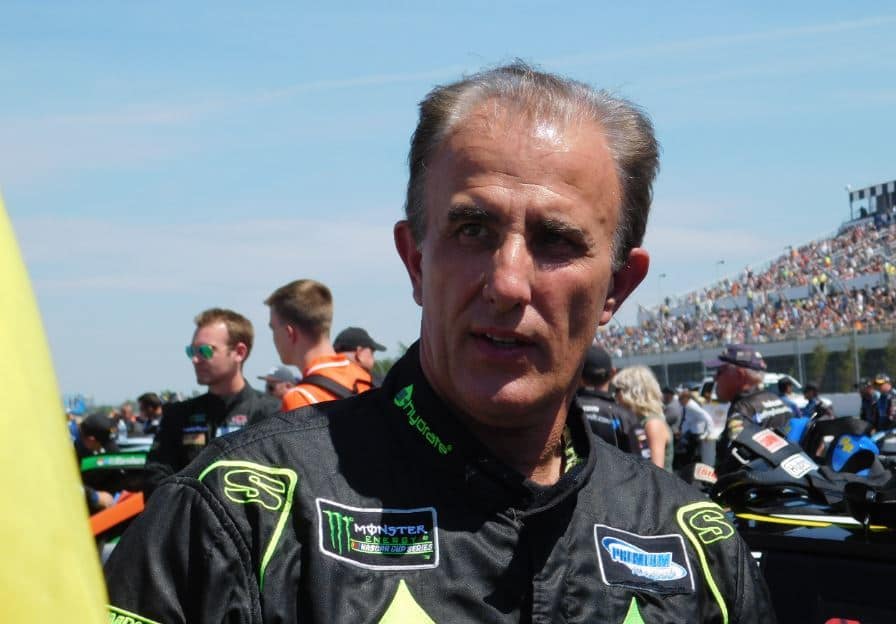 Eight years following his last appearance in a Monster Energy NASCAR Cup Series event, Derrike Cope returned to the premier series of the world at Atlanta Motor Speedway, the second event of the 2017 season.

Since that race at Martinsville Speedway in 2009, Cope put all of his attention toward Derrike Cope Racing, which he founded in 2008. The team competed in 134 races, with a best finish of 13th coming at at Daytona International Speedway.

Cope was also the man in charge at Shocks Shim Plus, before that known as C2P, his shock absorbing company, which he owned for over 10 years. Prior to the 2017 season, he jumped on board with Premium Motorsports to help the organization with their shocks in the Cup Series as well as the Camping World Truck Series. The company’s truck is driven by Wendell Chavous, who currently sits 16th in the championship standings.

The 58-year-old is on pace to run upward of 20 events this season, which will be the most he has run in a single Cup Series campaign since 2004, when he raced in 18 events for three separate teams. His best finish came at Darlington Raceway, when he took the checkered flag in 25th.

Frontstretch caught up with Cope, as he discussed why he returned to the Cup Series and the role he plays at Premium Motorsports when not behind the No. 55 machine.

Dustin Albino, Frontstretch.com: How did the pairing with you and Premium Motorsports come about?

Derrike Cope: I’ve driven for Jay Robinson in the past in the XFINITY Series. I had a good relationship there and an opportunity came up to work at the shop doing the shock absorbers, which is my forte. I’m the shock specialist for the team. I do the shocks for both of the Cup teams and the truck team, and I got to drive the Cup car on a limited basis. It’s really a great experience and you get the chance to drive these cars as they are now instead of where I have been.

Albino: When did you begin that role?

Cope: I just started this year.

Albino: Did they ask you to drive because you were filling another role?

Cope: I’ve had my own shock absorber company for a long time, and that’s really been my business. Their shock guy left, and they asked me if I would come in and fill that void for them and get to drive some races as well. It was really just a nice departure from running my own XFINITY Series team with my wife. It’s been an enjoyable opportunity to drive the Cup car again.

Albino: How do you think the season has gone thus far in the nine races you’ve competed in?

Cope: Certainly, I’m not as happy with my finishes and the way we’ve run at times. We’ve had some decent runs at times as well for what we have. We don’t have a lot of sponsorship, so we don’t have a lot of new tires and we use a lot of used tires. You have to take it with a grain of salt with what you do. I’ve had some good runs and I’ve had some mediocre runs. It’s still a learning curve because these cars are different from what I’ve driven before, and I’m still trying to find the sense of grip and balance in the car.

Albino: What do you hope you bring to Premium Motorsports compared to some of their other drivers in the past?

Cope: I have a great deal of knowledge from the stand point of shock absorbers. I’ve driven racecars for 35 years, so I have a good sense of what the cars do and the correlation between the platform of the car and the pull down rigs and the setup, plus I understand the shocks. I bring what I feel and what I know about the shocks and the car, setup wise. I think it’s a nice collaboration and I can work well with Reed Sorenson and other driers that come into play and I can offer input as well. I think that’s a nice mix.

Albino: What are the goals in this partnership?

Cope: My goal is to really enjoy myself. At this point of my career, I just want to find some pace because I’m off the pace that I want to be at. I’ve got to get used to the balance in these cars and the lower down force package. Once I can find more pace, I’ll feel more happy about it. But my goals are to race as hard as I can, keep the car clean and enjoy it.

Albino: How many races will you be in the car?

Cope: I don’t know exactly. So far, I have competed in nine. I know we’ll go through the next two months or so with me only being in two more races or so. Then, I go steady from about Indianapolis, Bristol on. I have a lot of races in the second half of the year, so we will probably end up with 20 something.

Albino: Since 2007, you had only competed in one Cup Series race, coming in 2009 at Martinsville. Why the return to Cup?

Cope: I started in Cup and I never really ran XFINITY for a long time. I kind of got forced to do that. This opportunity came back just simply because I wanted to experience the cars. I’ve driven the old cars back in the 80s. I’ve driven all the cars into the 90s and even the 2000s, and the first Car of Tomorrow with the spoiler. Now, this generation of car, I was really exciting on running the low down force cars and running the low down force package and getting something new. It’s a big learning curve and I enjoy a challenge.

Albino: Did you ever think you would compete in NASCAR’s premier series ever again?

Cope: I really didn’t think I would have the opportunity. When this came about, it really was a surprise. I relish the opportunity and I’m just trying to catch up right now.

Albino: What happened to the XFINITY Series team?

Cope: We shut it down. We couldn’t find a great deal of funding to keep it going and to elevate it to where we needed it to be. It was a lot of work for just three people and it was a tough deal to do. We just felt like the best thing to do was blow our horns in and maybe go to work and go to the races in a different perspective and then this opportunity arose.

Albino: Do you think there is ever an opportunity the team could return?

Cope: I really don’t plan on it. I don’t plan on going back to ownership. I really just want to run as many races as I can. My wife and I are trying to secure sponsorship and funding to run races. When that falters or we can’t do any more or the opportunity passes us by, then I’ll just work at a race team and my wife will do marketing and we’ll enjoy it from that stand point.

Albino: Is there any chance at all you will ever be back in an XFINITY Series car?

Cope: I really don’t have the desire to. At this stage right now, I want to work hard from the car chief or crew chief perspective with the team. I want to learn these cars and learn more from the technical side and maybe work toward the crew chief side of things more so in the future. The driving side right now is just pure pleasure.

Albino: Will there ever come a time where you won’t want to be in a racecar?

I don’t think so. I think the passion I have is still great. I love this sport. This is what my father did- he was a drag racer and I just love racing. I love this sport and I’ll probably do this until I don’t have the opportunity to do it.

Albino: Do you ever see yourself leaving the sport entirely?

What ever happened to his blond nieces who tried NASCAR?

Not to criticize DC, but these slow cars are hurting the race. Often causing a problem on the track. If you are getting lapped every 5 laps, then you don’t need to be out there on the track.

I would like to see a 20-40 lap, (depending on track size), consolation race for the slowest 20 qualified cars or bottom 20 in points at these NASCAR events. Preferably after qualifying.