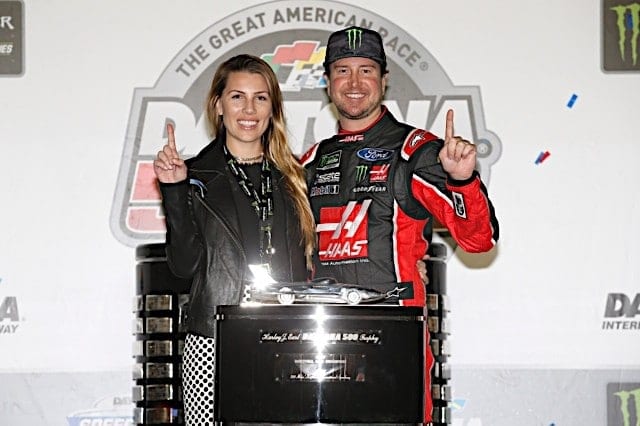 Did You Notice? … NASCAR races at Daytona can be deceiving? The sport’s Super Bowl, February’s Daytona 500 is known as a race whose winner rarely competes for the series title. Only Jimmie Johnson (2006 & 2013) has accomplished the feat since 1998.

There’s a lot of reasons Daytona winds up so different than the rest of the year. You have the parity of plate racing, putting teams like underfunded BK Racing on a level playing field with giants like Hendrick Motorsports. One of those underdogs can squeak out a top-1o finish, even contend for a win, and then never be heard from until the next time these guys slap on plates at Talladega Superspeedway in mid-October.

The Daytona 500 winner also has to deal with a whirlwind week of publicity. They’re jetted across the country, put on all the late-night talk shows creating an early distraction. They also are the only driver to lose their car in Victory Lane. Daytona keeps the winning vehicle for a year, robbing this year’s winner Kurt Busch of running the same Ford in this weekend’s Coke Zero 400.

The race’s status as the sport’s Super Bowl also has every race team treating Daytona differently. There’s so much effort put forth towards that race, that it could equal the next 10 races combined for some organizations. It’s the race everyone wants to win.

Perhaps that explains the Daytona 500 curse of recent years. Men like Jeff Gordon (2005), Ryan Newman (2008), and Matt Kenseth (2009) have captured the big trophy only to torpedo themselves out of championship contention down the road. Kurt Busch, this season’s winner is following a similar path. While his victory likely clinches him a spot in the playoffs, the team has earned just one top-five finish since that race, a fourth at Pocono.

A closer look at Busch’s stats shows how difficult his year has been. Leading just one lap at Daytona, the No. 41 Ford has been up front for just five laps ever since. By comparison, Elliott Sadler has run just twice, at Daytona and Talladega, but he’s led more laps this season (seven) with a part-time effort owned by Tommy Baldwin.

This year, in particular the Daytona 500 curse has spread down to far more than Busch. Just three of the top-10 finishers in this year’s race would make the playoffs if the season ended today. Let’s take a quick look at how many have spiraled downward since their season debut.

AJ Allmendinger (third): The ‘Dinger’s No. 47 Chevrolet hasn’t cracked the top five since Daytona. He spun out at one of his two best tracks, Sonoma on Sunday and wound up a mangled mess. JTG Daugherty Racing has struggled under the weight of expansion (Chris Buescher) and both teams sit over 200 points outside the playoffs.

Aric Almirola (fourth): A promising season for Almirola was undone by Kansas. Now, he is simply trying to re-sign sponsor Smithfield over the long-term while sitting out two months with a fractured vertebrae. The best case scenario is he returns to the sport at New Hampshire Motor Speedway in July. By then, he’s outside the top 30 in points and likely in an impossible position to qualify for the playoffs.

Paul Menard (fifth): This run was also Menard’s best of the season (sensing a theme here?) He hasn’t even finished inside the top 10 outside a plate race, crashed out twice and sits 24th in points. (That’s 168 markers behind Clint Bowyer for the final playoff spot if you’re counting at home). It’s been so bad at Richard Childress Racing, that rumors are running rampant Menard is opting out and taking his family-owned money elsewhere for 2018 and beyond.

Joey Logano (sixth): Even Logano, whose season started strong has seen those good vibes evaporate. A Richmond victory in April was labeled “encumbered,” after the car failed post-race inspection. He went five races without a top-20 run after that, and is now clinging to one of the final playoff spots on points.

Kasey Kahne (seventh): Kahne led seven laps at the 500, was fourth at Atlanta the next week and looked briefly like he had put it together for 2018. Ever since? He’s earned just one more top-10 finish, lost another major primary sponsor and seen his name pop up in Silly Season rumors. Crashing out of four of the past five races, Kahne’s playoff hopes suddenly look like a pipe dream.

Michael Waltrip (eighth): Waltrip, running in a one-time effort for Premium Motorsports is now retired from Cup Series competition. As for the car he drove? It hasn’t run better than 20th since.

Matt DiBenedetto (ninth): DiBenedetto, earning just the second top-10 finish of his brief career hasn’t run inside the top 15 since with the single-car, underfunded Go FAS Racing effort. He’s 32nd in points with virtually no shot at the playoffs.

Trevor Bayne (10th): Bayne, part of a consolidated effort for Roush Fenway Racing turned heads with a solid top-10 effort. But it’s been Ricky Stenhouse Jr., not Bayne, who’s been red hot for RFR ever since. Believe it or not, this run is still tied for his best finish of 2017 (he was also 10th at Kansas) and the driver sits 18th, 90 points out of a playoff spot.

Only runner-up finisher Ryan Blaney has bucked this awful Daytona 500 trend, winning Pocono and putting himself solidly in the playoffs. The trio of Blaney, Busch, and Logano (whose playoff spot is not guaranteed) would make it the weekend 500 top 10 in NASCAR’s playoff era.

Even the top contenders from that race fooled us. Remember how Danica Patrick ran inside the top 10 in both Daytona 500 stages? She wrecked out in stage 3 and has been living a nightmare since. Dale Earnhardt Jr. led seven laps in February, his first full 500-mile race back from post-concussion syndrome. But he wrecked out and likely needs a win to make the playoffs.

Even Kevin Harvick, earning the most bonus points (19) from the race’s first two stages while leading 50 laps has gone through post-Daytona 500 struggles. It took him until Sonoma Raceway last weekend to win his first race of the season.

The moral of the story? Don’t trust the Daytona 500 when trying to predict your champion. But that jumbled running order also gives hope for a Saturday upset. Men like Menard, Allmendinger, even Bayne know Saturday night could be their only shot at punching a

Expect them to pop up one more time… and then fade away. Such is the nature of NASCAR and Daytona in this era of plate racing.