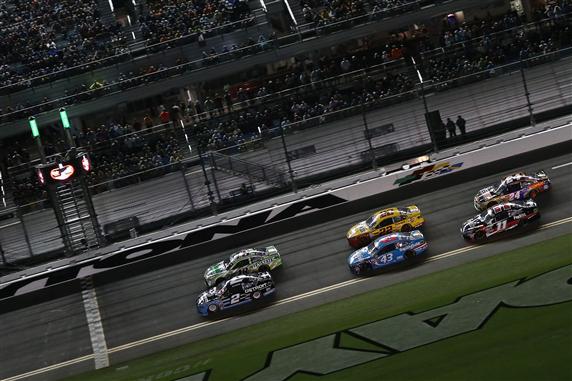 The July race at Daytona International Speedway has traditionally been held on Fourth of July weekend under the lights from the famed 2.5-mile superspeedway. With an apparent increase in appetite for road course racing and a ready and capable road course on the speedway grounds already, it raises the question…

Should the second Cup race from Daytona be held on the DIS road course?

If It Ain’t Broke, Don’t Fix It

Daytona International Speedway, under the lights, the Firecracker 400 (even though it’s the Coke Zero 400, just play along with me, would ya?), Fourth of July weekend, restrictor plate racing, summer vibes, an Earnhardt in the lead (well, not after 2017, just keep playing along) … what’s not to like?

If you read this column every week, you know that I refer to myself as a millennial, even though I have a love/hate relationship with the term. But even as a “young” fan of the sport, I can still appreciate tradition. The July Daytona race is one of the few traditions this sport has left, and it can’t go away.

When you hear the wordDaytona, it’s synonymous with history. The Daytona 500 is the only race in all of NASCAR to not have a sponsor in the title. Why? Simple: it’s just Daytona.

And when you say that word to me, I don’t think of road course racing, and I don’t think 99 percent of NASCAR fans do, either. The Rolex 24 is fantastic, and I’ll watch all 24 hours of it someday. But that has its own tradition, and so does the summer race on the high banks of DIS.

Does that mean making the July Daytona race a road course event, still under the lights, erases the tradition? Technically no … but for all intents and purposes, it’d be completely different.

I’m not a huge fan of ovals having stock cars run their road course facilities. Sports cars? Fine. IndyCars? Cool. Literally anything besides NASCAR? I’m all for it. Stock cars on the Indianapolis road course would just seem odd to me. The same goes for Daytona, and when the cars hit the “roval” next season at Charlotte, a little part of me will die inside. OK maybe not that drastic, but you get my point.

NASCAR has been quick to pull the trigger on changing things lately. The playoff format, the points structure, the multiple lower downforce packages, the schedule. But sport is built on tradition. One of the things I think of regarding NASCAR tradition is Daytona. Darlington, Bristol, 600 miles at Charlotte are in there as well. But taking NASCAR racecars to Daytona International Speedway and not having them race on the 2.5-mile oval? It just doesn’t seem right to me.

I love Road America. I love Mid-Ohio. I love MoSport and Montreal. I love Mexico City. I love COTA. As I talked about in last week’s 2HM: if you’re going to add more road courses to the schedule (which I think should happen), make them at legit road courses, not “makeshift” venues. The infrastructure is already there, the market is already there (fans show up for XFINITY and Camping World Truck Series races).

Now all we need to do is bring the Cup cars there and put on a show… but not at the DIS road course.

Daytona International Speedway, along with Indianapolis Motor Speedway, remain the only two tracks on the NASCAR calendar with proven, world class level road courses in the infield. Even with the rise of the Charlotte Motor Speedway road course up to hosting a MENCS playoff event next season, both Daytona and Indy remain the gold standard of infield road courses.

Daytona, in particular, is home to the 24 Hours of Daytona, the closest thing to an all-star event there is for North American motorsports. Considering how battle-tested this course is in particular, NASCAR should attempt to race it. Obviously, this race would replace the July oval weekend due to the Daytona 500 being, well, the Daytona 500. There are four huge positives this move would bring to the table.

First and foremost, the Daytona infield road course would be safer for everybody. Restrictor plate races are far and away the most dangerous races in NASCAR. In the last three years alone at Daytona, we’ve seen a terrible looking wreck in MENCS competition when Austin Dillon basically rode the catch fence in 2015, Kyle Busch breaking both legs in a bad XFINITY wreck and the motor of Kyle Larson’s XFINITY car somehow ending up in the catch fence. One less plate race on the calendar would be welcomed with open arms by the drivers and teams.

Bringing the Daytona road course to NASCAR only improves the prestige of both Daytona point events already on the schedule. Something new would happen to the July race for the first time since the speedway added lights in 1997, while the February races would become the only time all year long the full oval is used in competition. And it’s not like Daytona has to spend a ton of money on improvements like Charlotte to make the road course MENCS-ready; all the track would need to do is ensure the infield portions of the track are properly lit.

The event could be a dream to marketers. It would be a night race at a road course. How crazy is that? In addition, NASCAR would probably take the restrictor plates off the cars if they were to run this track. So now, in addition to being able to sell fans on the idea of a night race at a road course, now they could also advertise that they are “taking the plates off!” or something to that nature.

Finally, for the race fans, the Daytona road course would be a completely different animal from any other on the schedule. The first turn would become far and away the hardest turn in all of NASCAR, probably requiring the drivers to break almost as soon as they cross the start-finish line. Teams that set up their cars for the infield low speed corners would also somehow have to figure out how to set the cars up for high speeds and drafting on the oval portion.

It would be a crazy weird race, one that could be a disaster or a success. But it’s a chance worth taking just to see the results of it.

The cup cars have competed on the Daytona road course before in the 24 hour race (1974?) Pearson was the highest finishing Cup car and outran the sports cars on the oval portion of the track. The sports cars would catch up on the infield portion. It was a great race. That being said, Daytona is one of the great restrictor plate races most fans look forward to.
I’m all for adding road course races, they are great, but have them at true road courses. Road Atlanta is a great road course, lots of twists and turns and spectacular elevation changes. NASCAR used to run the Busch series there.

1976. It was bastardized class, sort of GN and sort of Cup with IMSA stuff thrown in, but it was pretty much a Nascar stock car for sure. They lost an engine and several hours changing it, still won class and 16th overall. It’s in a museum down south somewhere these days.

Not sure who Davet Segal is but just to bring up the question of Nascar’s premiere series going to Daytona and racing on the road course is beyond Stupid. Who approves this type of junk to be published.

I hate restrictor plate racing, dumbest form of racing ever conceived. I’d far rather watch Cup cars on the road course at Daytona than watch another stupid wreck fest. That would be interesting as opposed to watching a 150 laps of cars driving fast in close proximity to each other while waiting to crash, rinse and repeat then throw the checkers over the 15 or so cars left standing. Dull, boring and dumb.