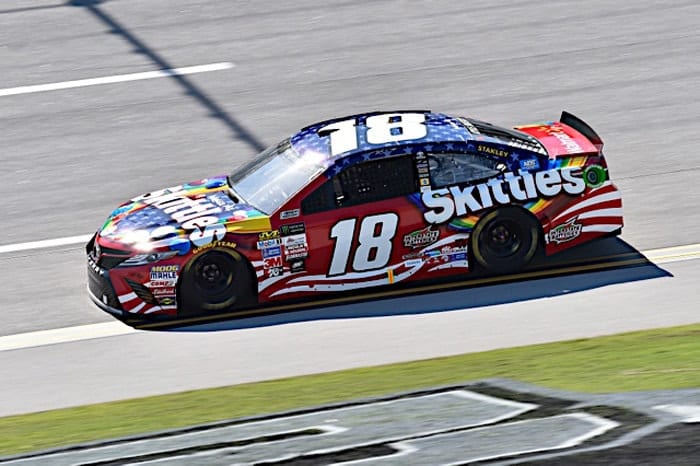 Will No. 18 Team Stop Shooting Itself in the Foot?

For a team that has led as many laps as it has, it’s shocking that a victory hasn’t slipped through the crack of Joe Gibbs Racing.

Kyle Busch has been the top driver in the foursome, with six top fives, five consecutive top-five starts heading into Daytona International Speedway and more than 700 laps out front. Despite the speed, a lack of luck and closure has kept him — and the team — in the still-winless category.

But the No. 18 team has also been shooting itself in the foot with multiple rules violations as of late. With regular crew chief Adam Stevens already being suspended for four races after the No. 18 lost a wheel at Dover International Speedway, it’s again been hit, with interim crew chief Ben Beshore being suspended for a lug nut violation at Sonoma.

So for Saturday’s Coke Zero 400, Busch’s interim of the interim crew chief will be Jacob Canter, JGR’s test car engineer.

With multiple examples of a fill-in crew chief having little effect on the team’s performance — at least for a race or two — the real question is when the team will get off the mid-week hit list. It may be solid on points to make the playoffs, but point penalties can be costly if a victory continues to cheat the No. 18’s hands.

Thankfully, Canter’s role will only last a week as Stevens will return after Daytona. Busch’s July Daytona prowess has seen its ups and downs, doing both in an upside-down crash in 2014. But Busch won the event in 2008 and finishing second in 2016, his third runner-up result in the summer race.

The speed is there, eventually the win will come. But it’s best to keep the same crew chief week to week.

Will Roush Fenway Back Up Talladega Win?

After Talladega Superspeedway this year, Roush Fenway Racing is the hot stuff for this weekend at Daytona.

With Ricky Stenhouse Jr. winning from pole for the first time in his Monster Energy NASCAR Cup Series career, it set a wave of expectation for what was to come in less than two months.

That time frame is now less than two days, where we will see if Stenhouse can back it up with another victory for the RFR crew. Will he do it? When it comes to plate racing, naturally, you can only go by the numbers — but even then, they can sometimes be hard to trust.

Stenhouse has a little of both when it comes to performing and finishing well at Daytona. With finishes outside the top 20 in four of the last six races, he counters that with a fifth place in last year’s July event.

For 2017, the numbers are similar since his ‘Dega victory, as he has only one top 10 in the six races since.

As for Trevor Bayne, all the stats have been under par with his No. 17 partner. With only two top 10s to Stenhouse’s six, Bayne has been decent on pace but the finishes haven’t made waves. Flipping to Daytona, Bayne hasn’t repeated his 2011 Daytona 500 victory with much results-wise, finishing 20th or worse in the eight Daytona races that followed. Since, Bayne has finished top 10 in three of the last four, including a third in the July race last year.

Judging from these numbers, it’s reasonable to have RFR on your DraftKings fantasy team this Saturday.

It’s a popular question, but it’s one that’s also on my head. You ciould say it’s a must-include question in a time where Dale Earnhardt Jr. is retiring and approaching his final start at Daytona.

But instead of simply asking if he can win one more time at the place that made his name famous, I want to know which Earnhardt will show up this Saturday, because we have seen a few in the last couple years at plate races.

On the metric of the Daytona 500, Earnhardt was outstanding between 2010 and 2015, winning once and finishing no worse than third in the other five. The remarkable results returned to the July race in ’15, winning the race for the first time in 15 years.

But despite leading in six of the last seven Daytona races, Earnhardt  has seen worse results on plate tracks than in any other field of track, finishing 36th, 40th, 21st, 37th and 22nd in the last five.

Which Earnhardt will show up Saturday? The No. 88 has put two top 10s together in succession for the first time in more than a year. All the while Earnhardt launched his #Appreci88tion farewell tour for the remainder of his season. Perhaps it’s a perfect time for a Daytona return.

Are There More XFINITY Underdog Performances to Come in Daytona?

Thanks to Iowa Speedway last weekend, this question has a bit more muscle than usual in the week leading up to a restrictor plate race.

Now that that’s all settled in, why don’t we talk the odds of it happening again in Friday’s Coca-Cola Firecracker 250 at Daytona?

Smithley is a solid place to start. Though his car number is No. 0 on the grid, he and the entire JD Motorsports team have been a little higher on the charts at Daytona. He was joined by teammate Harrison Rhodes in the 10th spot, his second Daytona top 10 in two years.

Though Chastain grabbed his first top 10 since 2015, he has also brought his car home in that group, doing so on two occasions in both 2015 events.

If you want to go even smaller on the team meter, you can easily place 2000 champion Jeff Green in this spot. Leading 18 laps toward a 10th-place finish at Talladega this spring, Green also scored a top 10 in the July Daytona race last season. He will race the No. 8 again for BJ McLeod Motorsports.

Additionally, Joey Gase was in contention to win the February race en route to seventh place. His Jimmy Means Racing team has seemed to always have something at the plate races.

Leading the last lap is the only one that matters. Other than that, it’s a largely irrelevant stat. JGR is the cheating-ist outfit in the bunch. They are the primary reason the lug rules got re-instated.
RFR ain’t going no where but to the front!
Lil E yawn! Never been a fan of the “E” brand (Go Geoff Bodine). Junior’s a decent chap & I respect him, but not so much the Nation or the attention he unduly garners.
NXS – with “only” 4 cuppers (Dillon, Suarez, Logano Jones) (only, lol) perhaps, but it seem Nascar is still interested in a foot-shooting exhibition. 4 is less than I would have expected, & less than normal, but still two too many for my sensibilities. Regardless, I don’t really have consummate time or interest in Nascar since the mock-ish staged exhibition gimmickry came to town. Not while IMSA is streaming WGI anyway…