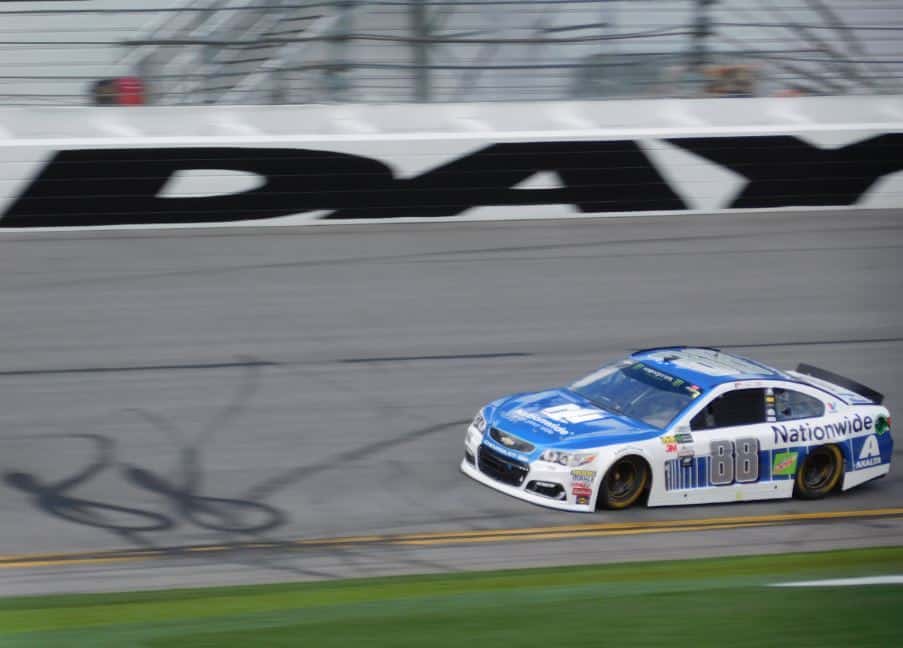 This week’s fantasy forecast is backed by DraftKings, the No. 1 platform for daily fantasy sports. You can jump in on all of the daily fantasy NASCAR action at Daytona this weekend by signing up here for a free entry into one of this weekend’s contests. All you have to do is make a $5 deposit to get started!

Saturday night may well be one of Earnhardt’s final shots at a win in his final season. He finally has a little momentum, too after battling his way to a sixth-place finish at Sonoma.

Earnhardt is the active leader in wins at Daytona with four. His most recent came in this race back in 2015. In earning that victory, he started from the pole and led a race-high 96 laps.

Sure, the No. 88 team hasn’t shown a lot of speed this year but restrictor plate races are always an exception. In the wreckfest that was February’s Daytona 500, Earnhardt finished a disappointing 37th after starting on the outside of the front row. He had an average running position of eighth place before getting knocked out.

Past history here combined with the emotion of his final (maybe) Daytona start will make Earnhardt a trendy pick. But it’s also a smart one.

In five Daytona races the past three seasons, Logano has finished outside the top 10 only once. He won the Daytona 500 in 2015, starting this trend and last season, he finished fourth and sixth here. Logano led a total of just 22 laps in the two 2016 events, showcasing that in plate races it’s never where you start – it’s how you finish.

The Fords have been incredibly fast on restrictor plate tracks this season, and have won both races so far (Kurt Busch in the Daytona 500 and Ricky Stenhouse Jr. at Talladega). Don’t be surprised if the Blue Ovals continue this streak with Logano leading the way.

Harvick crossed Sonoma off the list of tracks he had yet to win at when he picked up the victory last weekend in dominating fashion. As soon as Harvick got out front, he ran away from the field in a race where pit strategy and track position were the keys to victory. It was an important pick-me-up for the veteran’s season, the potential playoff clincher happening in his home state of California.

Back in February, Harvick led a race-high 50 laps of the Daytona 500. But as the race unfolded, he was another driver who fell victim to getting caught in the mess of crashes. He ended the day in 22nd, three laps down, his Ford battered and unable to hold onto the lead draft.

Harvick was the runner up in the 2015 Daytona 500, and then had two consecutive fourth-place finishes in the following two races, one of which came from the 39th starting position. He has had bad luck with wrecks as of late, but that shouldn’t deter you from looking his way this weekend.

Johnson has been all or nothing during his Daytona career. He has 11 top-five finishes through 31 starts, but also has 10 finishes of 30th or worse. He does have three wins, including a sweep of both races back in 2013, but has increasingly been hit or miss as his career has progressed here.

Starting position will be the deciding factor when it comes to Johnson. If he has a poor qualifying effort, the upside will be there. If he starts towards the front, it will be far too risky. But keep in mind the No. 48 team has crashed out of the last two races at Daytona; it’s hard to get bitten three times in a row.

Bowyer was a big talking point heading into the season. His return to a top-level team at Stewart-Haas Racing led to talk of potential championship contention. While he has had ups and downs in his first season running the No. 14 Ford those predictions have proven true. He finds himself sitting 11th in Cup Series points, sitting in the last playoff spot and has momentum heading into the regular season’s final ten races.

A second-place finish last weekend went a long ways toward proving his supporters right. Bowyer had perhaps the most impressive run we saw at Sonoma Sunday, recovering from multiple wrecks to move into the runner-up spot in the closing laps.

At Daytona earlier this year, Bowyer was running within the top 10 most of the day. But, like many others, he wound up caught in someone else’s mess. At the end of the day, he finished 32nd, which was a huge hit to anyone that had Bowyer in their DraftKings lineups.

This time, I expect a different outcome. The lightning of a multi-car wreck won’t strike him twice, making Bowyer a dark horse to steal a victory Saturday night.

Blaney was one of a handful of drivers running towards the front during the closing laps of the Daytona 500. The race came down to fuel mileage, and we saw drivers like Martin Truex Jr. and Kyle Larson go from leading the race to running on fumes during the final laps. Blaney took advantage and finished second, a career high for him at Daytona.

The sophomore driver has stolen the heart of NASCAR America this season, catapulting himself to the next level of stardom in the sport. An exciting win at Pocono finally put him in Victory Lane and lifted that weight off his shoulders. Blaney is aggressive and fearless, which is what is needed to be successful at restrictor plate tracks. Don’t be afraid to pick him.

Dillon has the best average finish at Daytona among all active drivers, the perfect match for his role as driver of the No. 3 Chevrolet once driven by Dale Earnhardt. Through eight races at the track, he is averaging a 12.6 with five top-10 finishes. A 19th-place result in February is actually his worst Daytona performance since debuting back in 2013. He also won the pole for the Daytona 500 as a full-time rookie in February 2014.

Dillon found Victory Lane for the first time this season at Charlotte, so the monkey is off his back like Blaney. Expect him to make an aggressive push for the win at a track that he seems to have figured out.

Stenhouse had fans jumping out of their seats as he battled Kyle Busch for the win at Talladega earlier this season. Winning that race from the pole, he sealed the deal and picked up the checkers for the first time in his career. Stenhouse started up front and stayed up front, which is tough to do at a plate track.

Roush Fenway Racing, led by Stenhouse has that restrictor plate momentum on his side. They’re among the Ford family that has been so dominant at superspeedways this season, making Stenhouse a contender for a top finishing spot Saturday night.

Ragan is another driver who performs well on restrictor plate tracks. His only two career wins have both come on them, Daytona in 2011 and Talladega in 2013. He is averaging just below a 20th-place finish at Daytona, which would be phenomenal value for a driver who costs $5,200 for this weekend’s slate.

Ragan finished 25th in the 500 earlier this season and has finished within the top 25 in five of the past six Daytona races. He’s a safe bet to do so again with Front Row Motorsports. 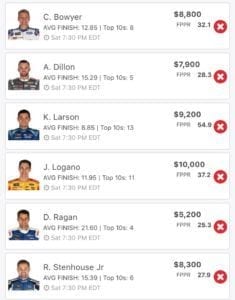